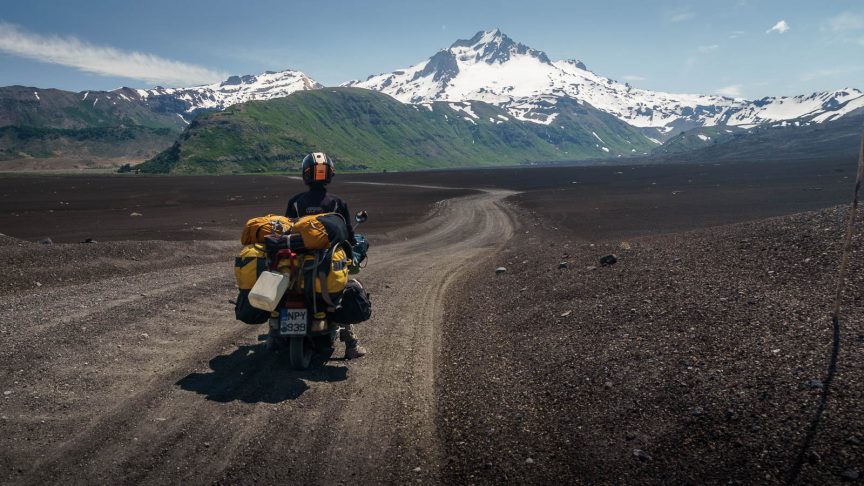 The day we started our short trip to Chile, we could not imagine that we'd soon climb a volcano and that we'd accidentally live the most surreal adventure of our journey!

We woke up early the next morning, packed our stuff and started our short trip in Chile! The distance from where we were to the Pichachén Pass was about 311mi (500km) and we were planning to do them in 2-3 days, depending on what we'd find ahead of us. The weather as we were moving away from the mountains was warmer and the spring had done its miracle: everything around was unbelievably green and colorful flowers were in absolute blossom. The traditional wooden cabins, typical in Chile's southern parts, were painted in various colors making the scenery even more pleasant. It felt as if we were on holiday, a short holiday away from the vastness of Argentina's arid landscape.

The road that was parallel to Maule river, led us to Linares and from there, we followed the RN5 (the Panamerican highway), riding south towards Los Angeles. We had forgotten how much we dislike riding on highways and Chile's highways are fast, noisy and with expensive tolls – the style we really hate! So, after buying some of the most delicious strawberries in the world(!) from a roadside stall (If you ever find yourselves in Chile during strawberry season, eat as many as you can because they are the best!) we decided to abandon the highway. From Chillán, we took N59Q, a significantly quieter road and continued southwards. This route was way better and fortunately, from the moment we took it we felt relaxed again, riding across the green Chilean landscape.

That night we slept by the lake of Trupán, next to the tiny village that we chose randomly, just by calculating the distance we had ridden that day and the time of the sunset. It was a calm night and as always happens when we camp at random places, two stray dogs kept us company throughout the night, sleeping in our tent's porch. We were confident about the next day. There were only 87mi (140km) left until the border, so the only thing we had to do was to stop at the next fuel station we had spotted on the map, fill our tank and continue towards the Pichachén Pass. 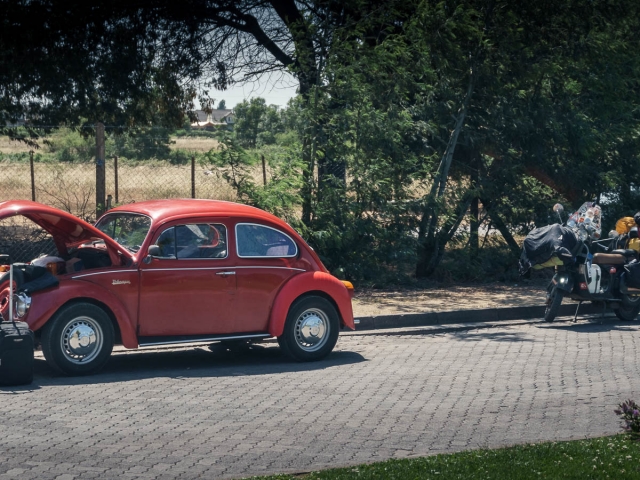 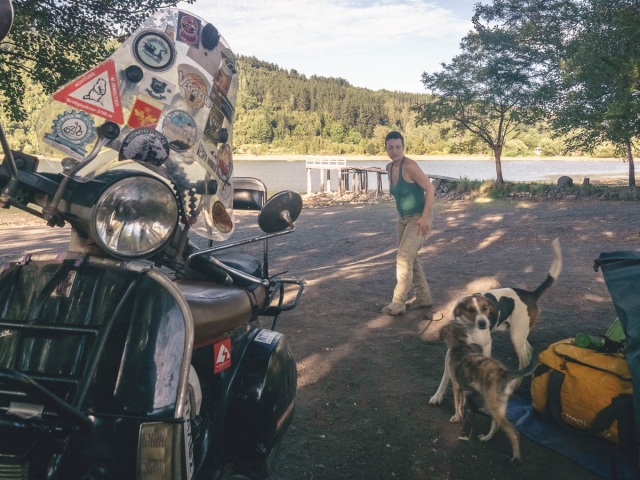 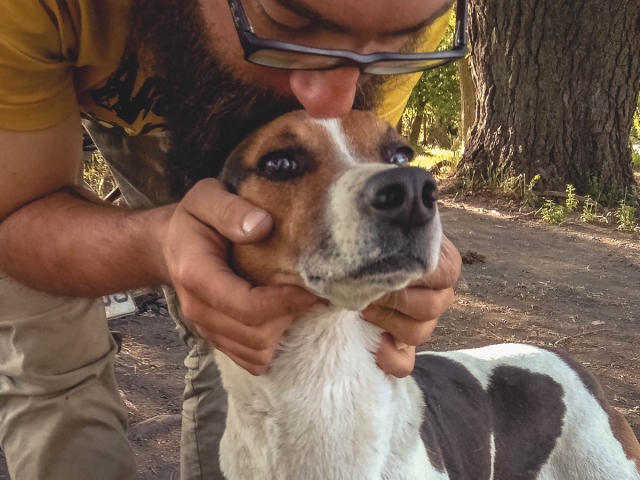 To our surprise, when we reached Antuco, the last village in Chile, we found out that the fuel station was closed and that we had to wait one week for it to reopen – under a new name. The “one week” soon became “10 minutes” because one of the two guys working at the fuel station was selling petrol at his backyard. Diego and Carlos were happy to have a chat with us, asking about our trip and soon after having filled up Kitsos' tank in Carlos' yard, the invitation came from Diego: he had a house available for us in case we wanted to rest for one day and have the opportunity to see Antuco – which by the way, was a very beautiful village. In fact, when he asked we described it as a “little paradise” which happens to be Antuco's nickname! Not only did they offer us a house to spend the night, but they also took us to the nearby river (Río Rucue), a place of serene beauty with such transparent water! We couldn't believe that we had found this hidden treasure by chance. That night, we slept in a proper bed, had a proper shower and ate a properly cooked meal, so the next morning we were ready to go. 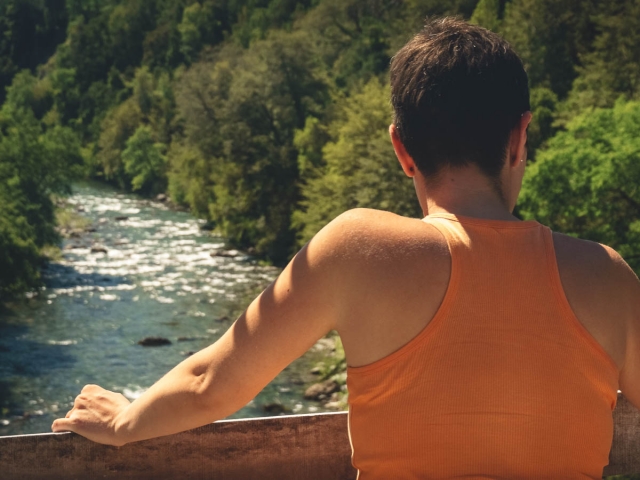 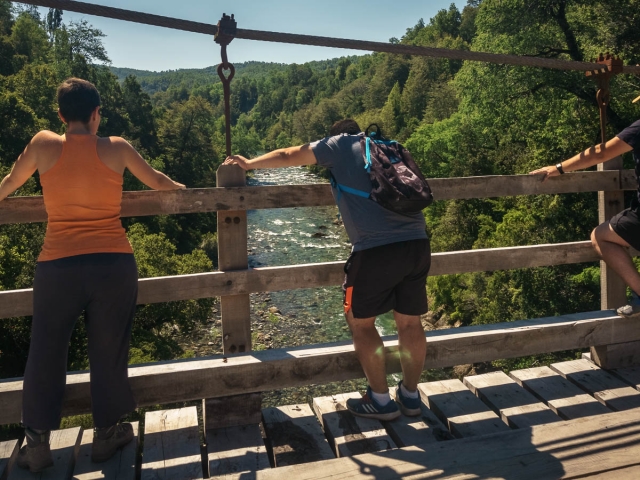 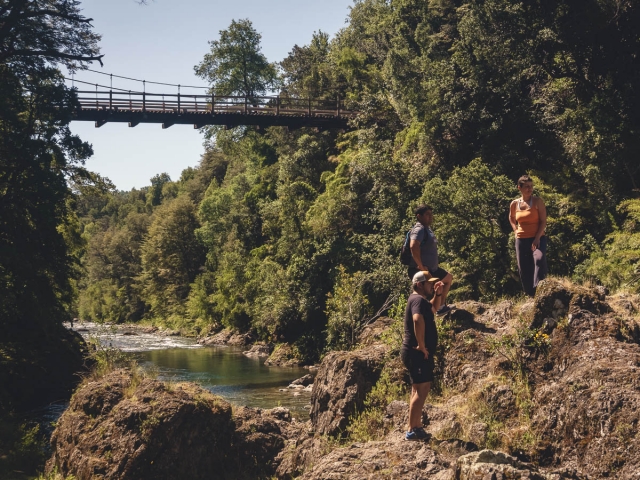 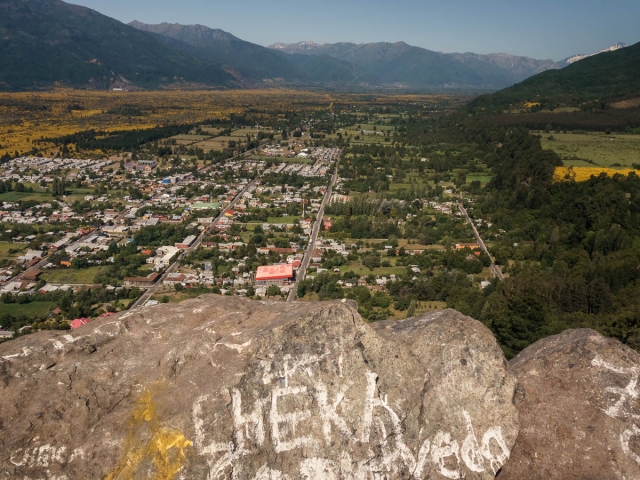 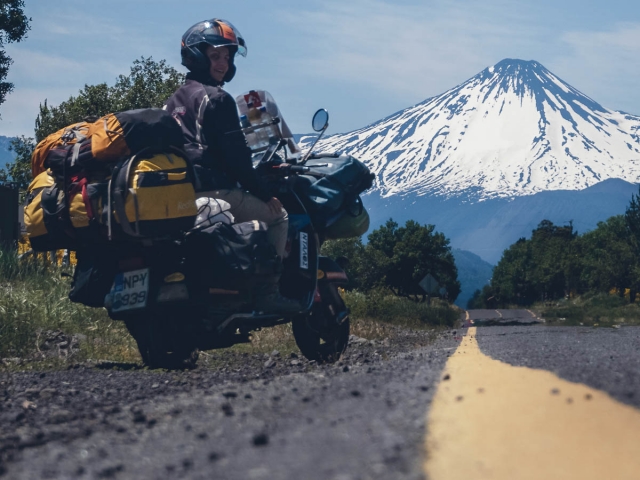 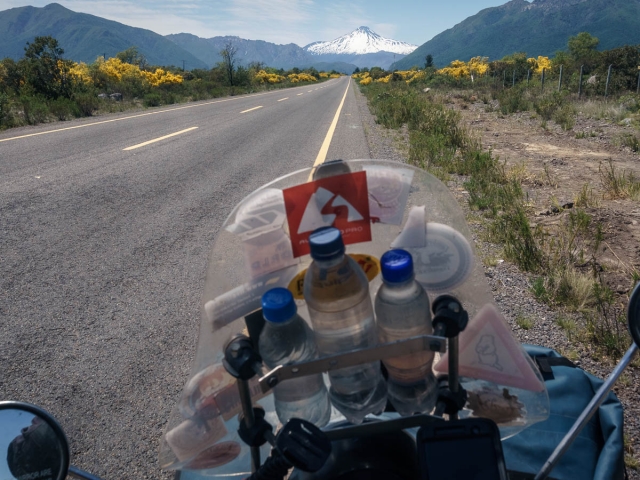 The sun was already shining when we loaded our stuff on the scooter. One last thing to do was to give an interview to the local radio, which – as it proved later on that day – was only the beginning to what we now call “the most surreal day of our lives”! The interview was a great experience, but the time was passing and we were now anxious to go. It was almost noon and we had about 62mi (100km) off road to Argentina's border. When our new friend from the local radio warned us about the condition of the road to the mountain pass that had recently opened, we reassured ourselves telling each other that it was the usual exaggerations.

We left Antuco and for the first few kilometers the scenery was beautiful and serene: green trees, colorful flowers and in the background the snowy peaks and the volcano... However, when we entered the Laguna del Laja National Park things changed a bit. The scenery was equally amazing but now it was pure wilderness. All the trees and flowers disappeared and the road was as if it would lead us to Mordor: black volcanic sand, rocks and the turquoise water of the lake Laja. We had to stop for a moment just to give ourselves the time to realize where we were. We were about to climb a volcano! 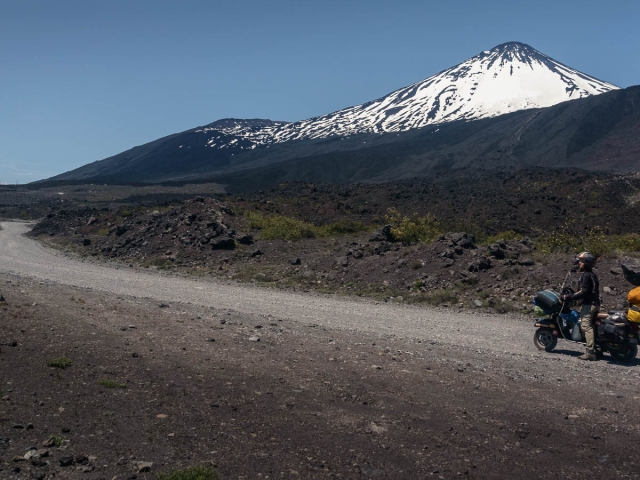 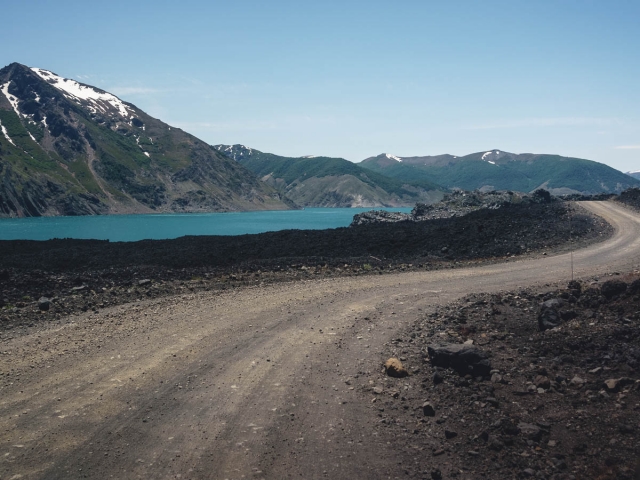 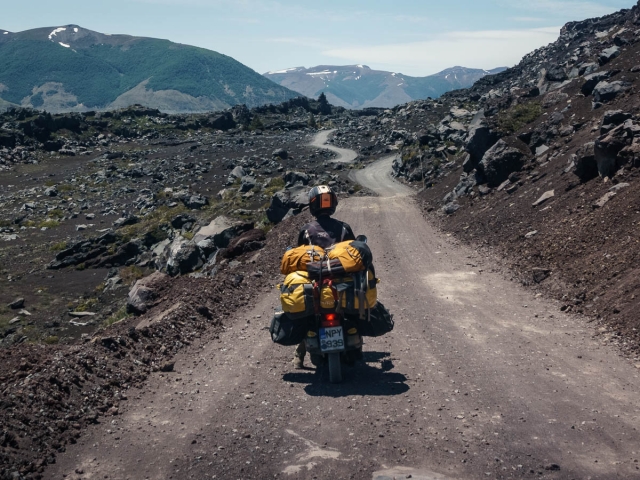 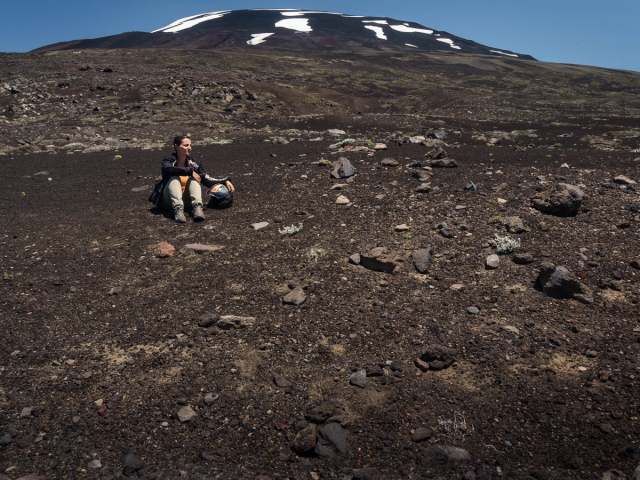 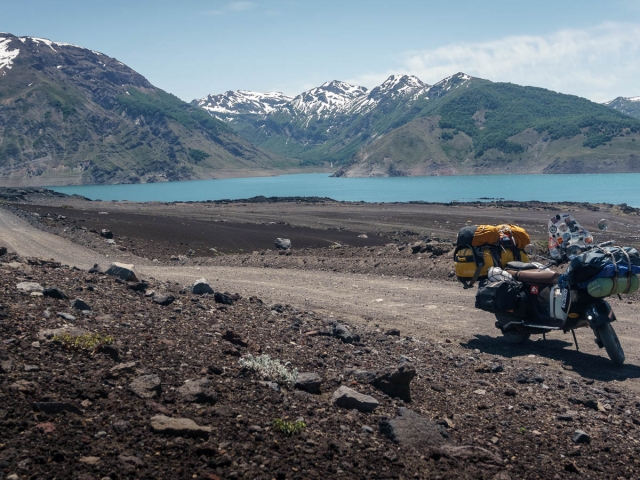 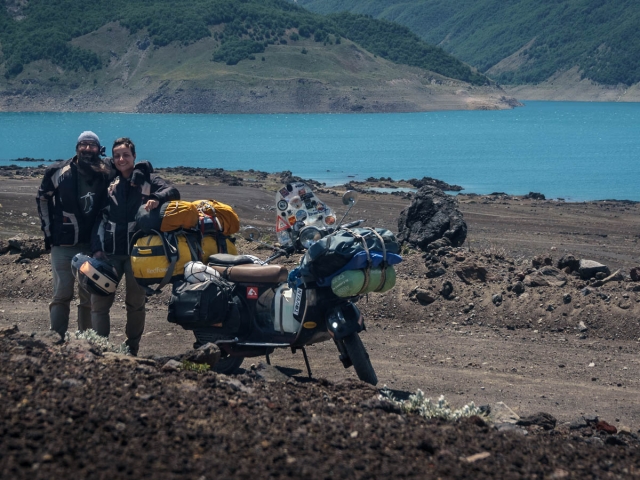 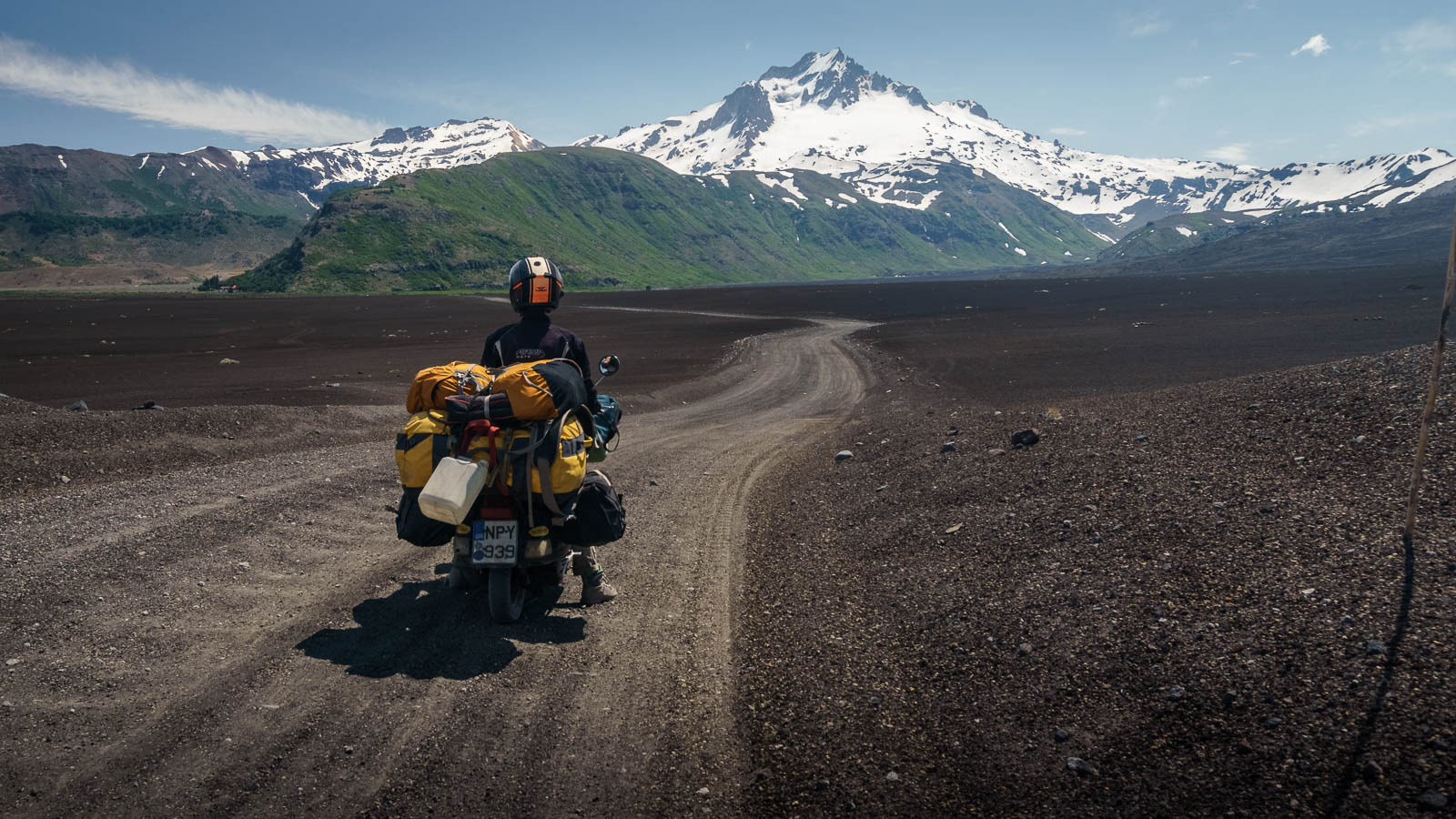 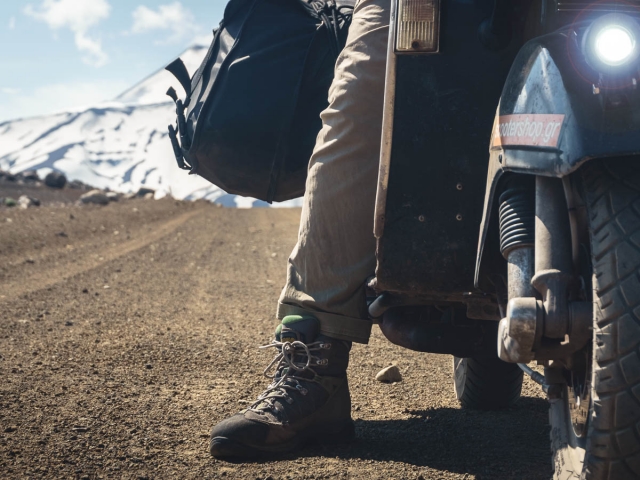 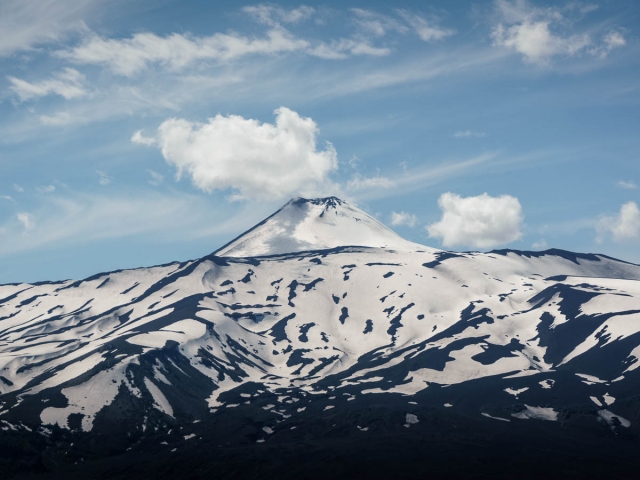 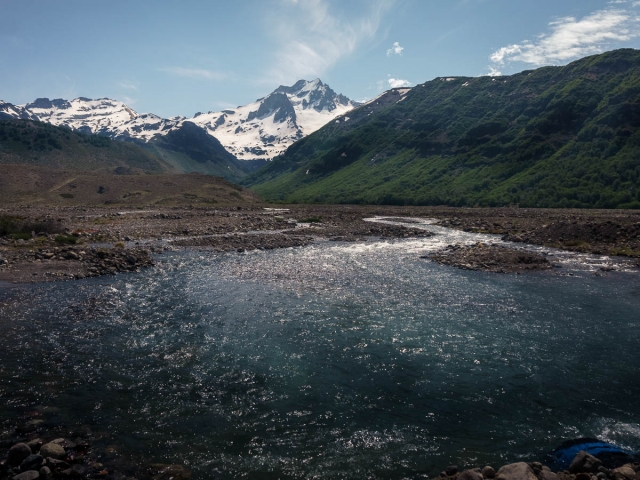 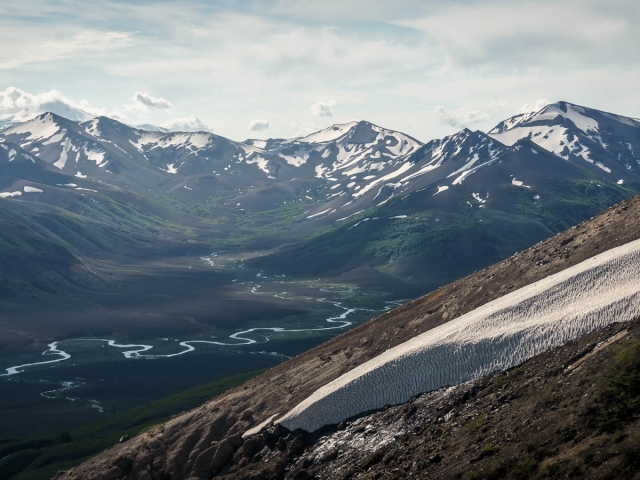 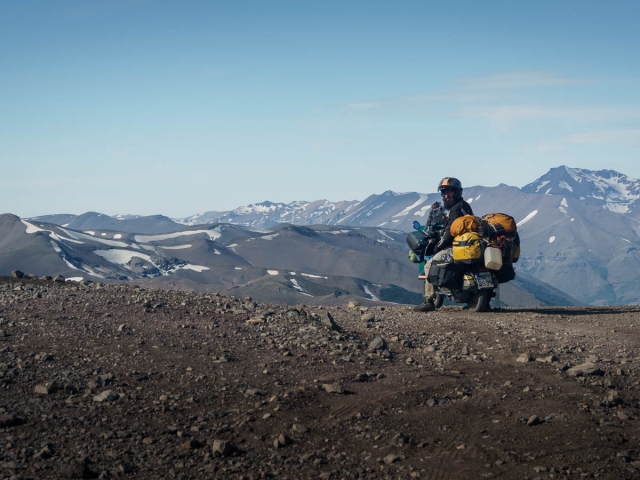 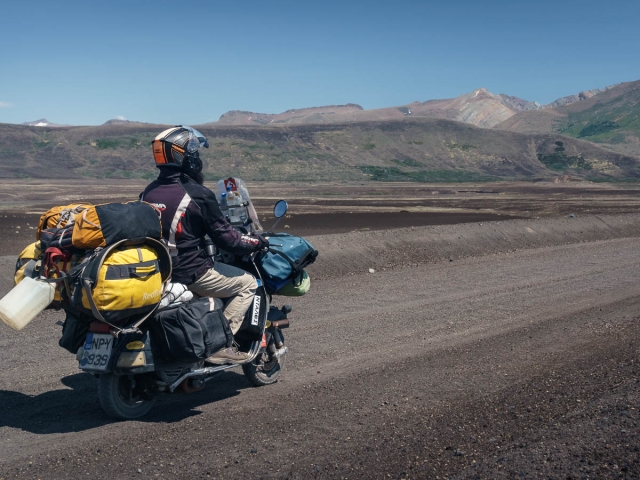 As we were climbing towards the Pichachén Pass, it became clear why the people of Antuco tried to warn us. The altitude was not that high, but the sandy road and the steep incline soon made our engine overheat... The icing on the cake was the strong wind that started blowing! In cases like this, the first thing to do is to get rid of some weight. And the easiest way to do it is to get rid of one passenger. Long story short, I did what I always do: got off the scooter and started pushing until it had enough power to continue the climb. I can only imagine the surprise of the two passengers of the passing by truck, when they saw me walking with my helmet still on. They agreed to take me to the top of the pass. When we met again with Stergios, we couldn't stop laughing: what started as a short trip to Chile had now become an unbelievable adventure!

The officers at the Chilean border checkpoint (after several questions about how we had climbed all the way up on “that thing”) were clear: we needed to reach the Argentinian checkpoint before 19:00 and stamp our entry that same day. Luckily, we had finished with the climb, so we already were at the highest point, but the 18.6mi (30km) to the checkpoint weren't that easy either. When we arrived (at 18:30!), the Argentinian officer told us that they were about to close the office and go look for us – the two checkpoints are in contact about the number of vehicles and people crossing the border, in case of an emergency. Until we were told, we hadn't realized that it had taken us more than 6 hours to ride the 62mi (100km) to Argentina!

We were in a hurry. We needed to find a place to pitch our tent for the night, but the man who came running towards us, made us stop. What did he want? Almost in panic, he explained that he was all alone, unable to put his approximately 300 goats into the pen. He was afraid of the predators lurking around. He needed our help, but we had no idea how to do it. Following his instructions (and admiring his stamina) we started running around the goats – trying to do what a shepherd dog does. I don't know how, but we made it! We managed to help the poor guy, who would now use his lasso to catch the last few goats, and went on to find a place to sleep before it went completely dark.

When we put the last peg of our tent in the ground, we looked towards the starry sky and realized we had found a small piece of heaven on earth. We had camped next to a stream, a tributary of Neuquén river and we were all alone. I'm not sure, but that day we just ate some lentil soup and went to bed exhausted, but just moments before we slept we remembered what day it was: it was the 20th of November, our anniversary! 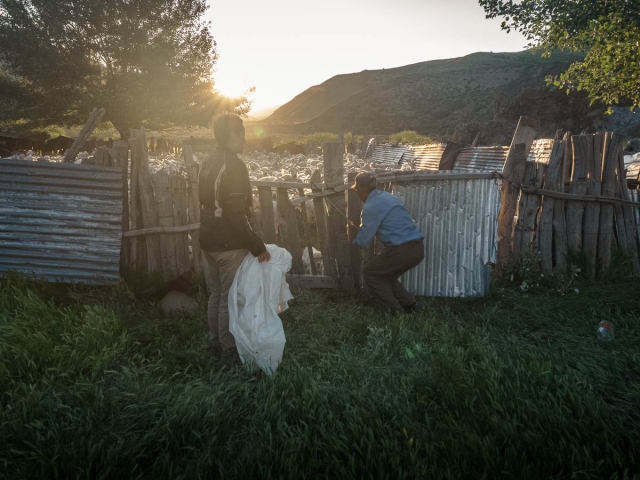 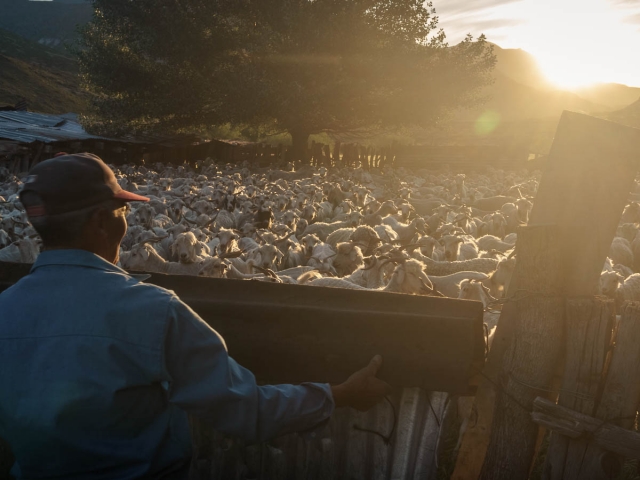 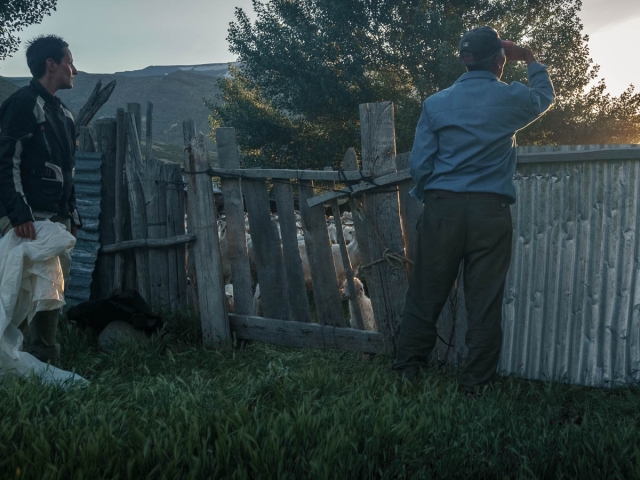 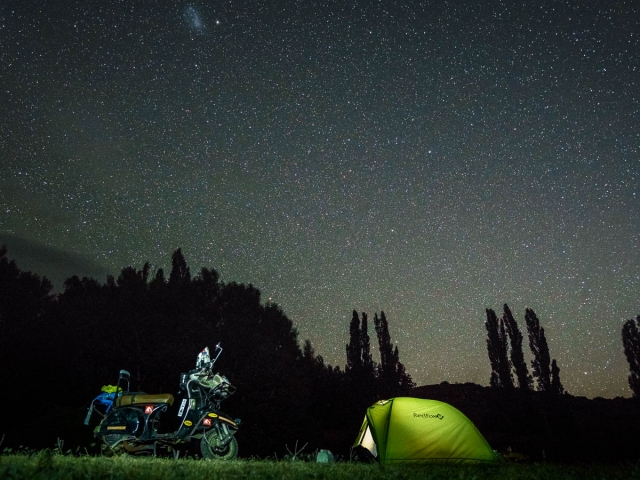 2 Comments on “The most surreal day of our journey! (Chile)”