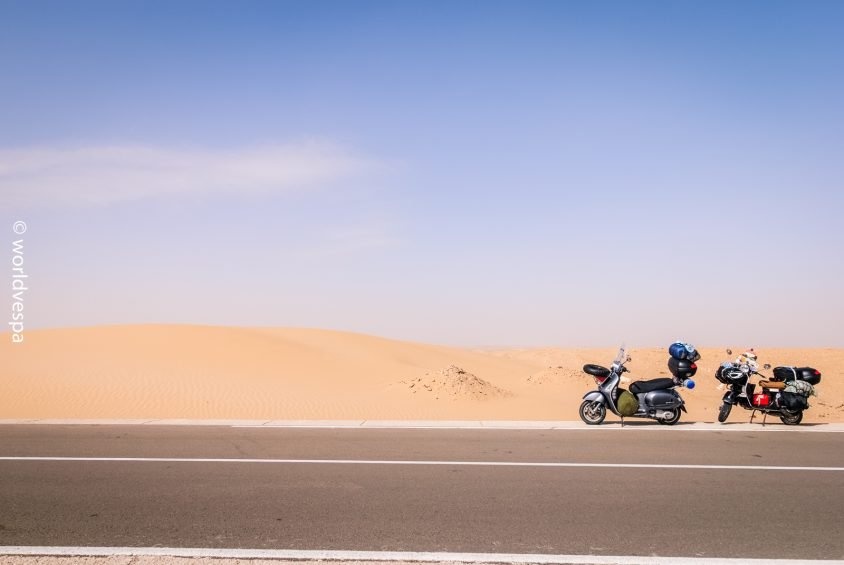 The road now is a straight line and it’s the first time I’m happy to drive in a straight line! On our right hand, the Atlantic ocean with its huge waves and the fresh sea-breeze, on our left hand the ultimate nothing-ness(!). Only the line of the horizon! This image is what we had been seeing everyday traveling from Tan Tan until just before the borders of Mauritania, where we are right now in a small room of a motel above a gas station.

No, our week was not boring at all…it was tiring, exhausting maybe but not boring. I had been sleeping on my feet, I had sunburns, I had a back-ache (and a bottom-ache) from the 8 hours of continuous riding, I had to drain some water out of my tent, I froze while I was driving soaking wet from the rain…but no, I didn’t get bored! 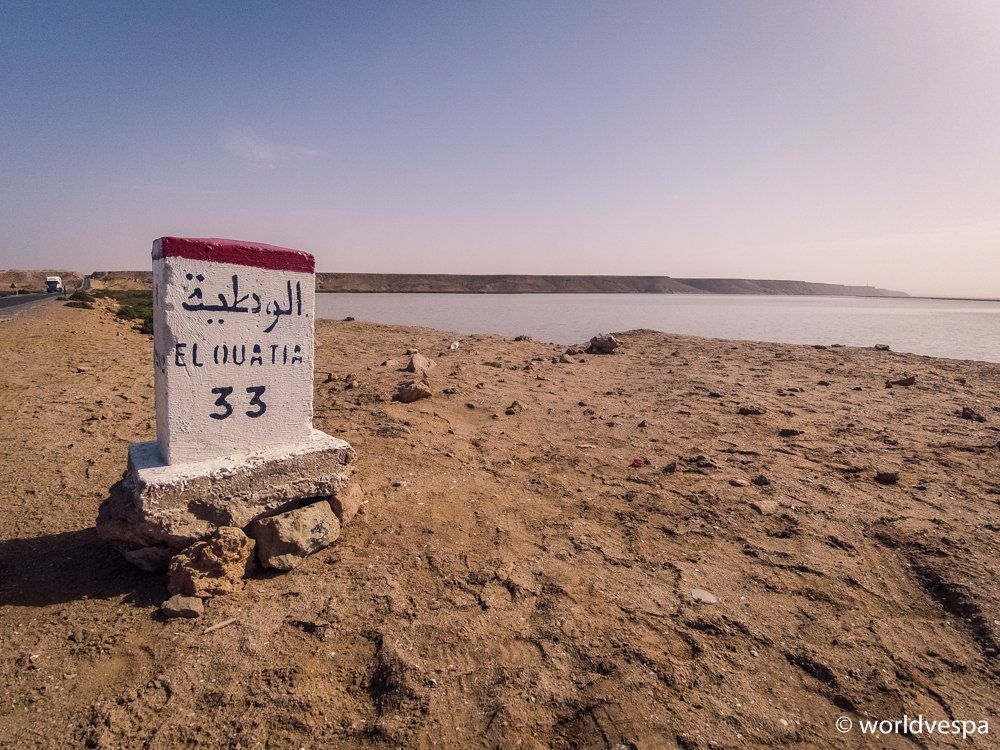 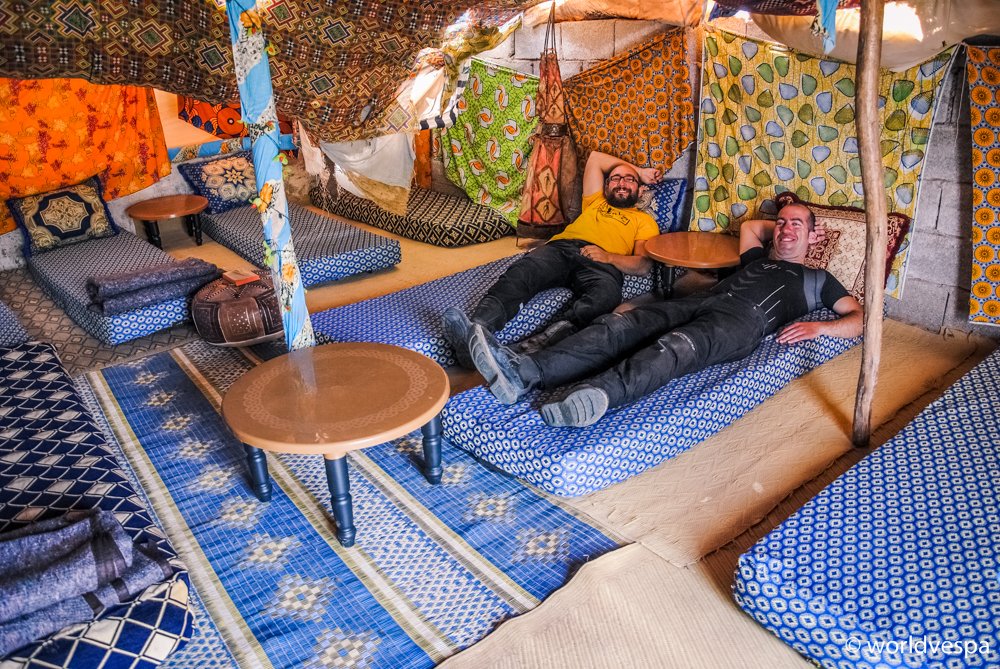 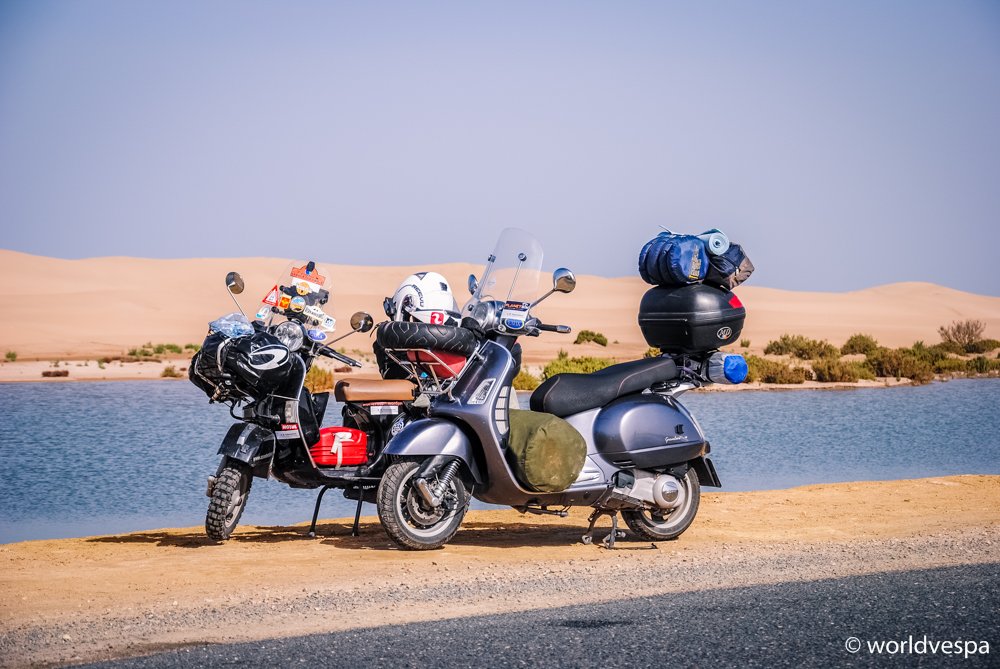 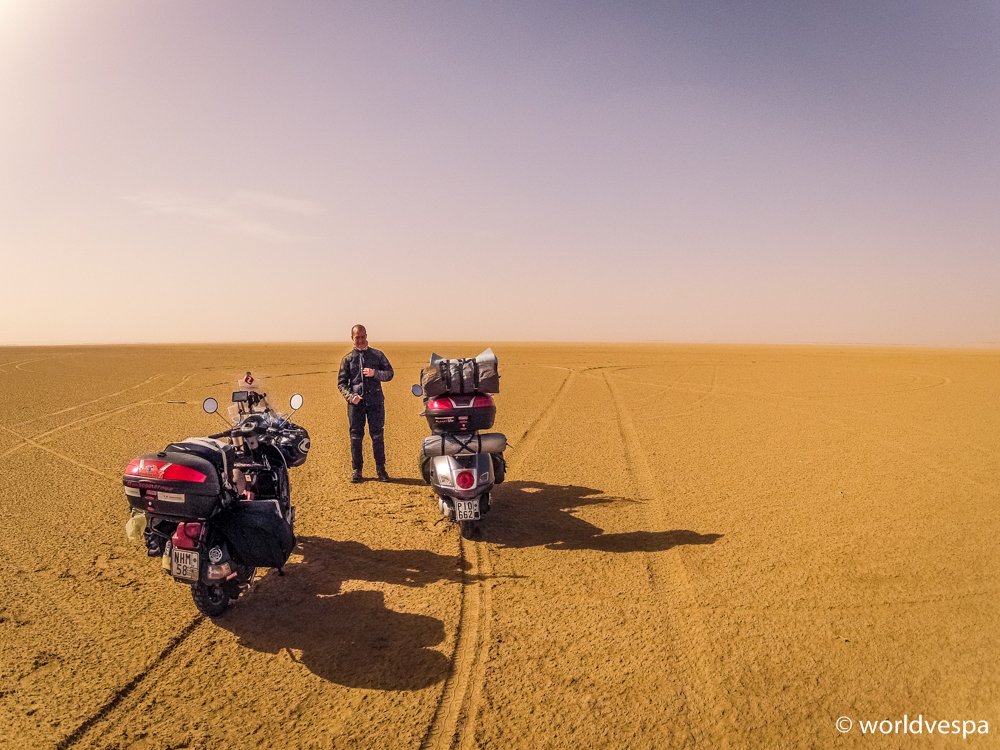 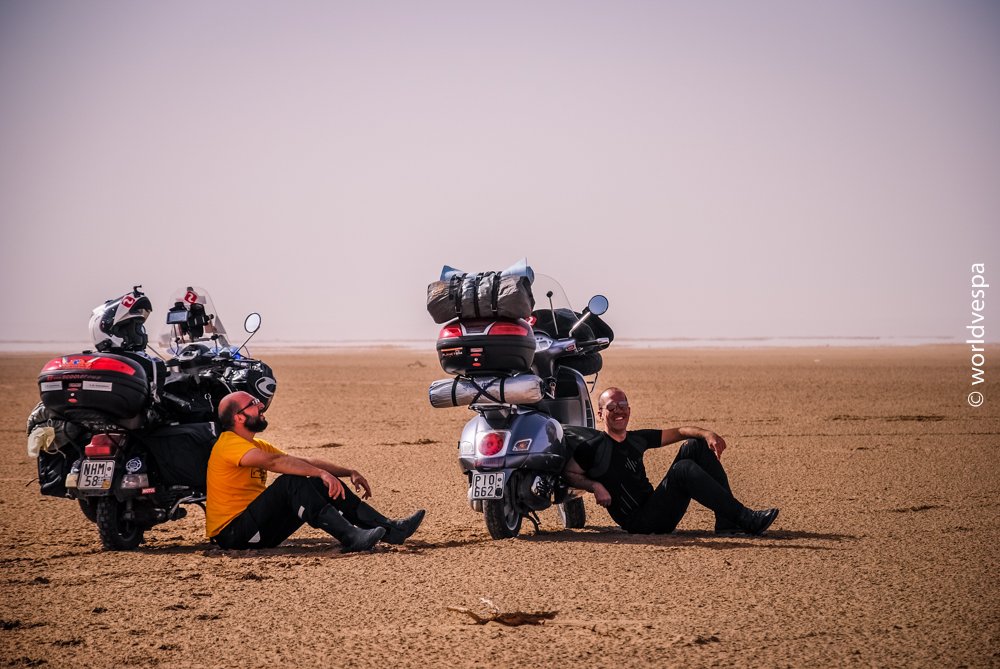 In a small town some kilometers from El Aaiun, we slept for two nights in a place which had probably been some kind of military camp and its owner had only adjusted the sign outside it to “campsite”. We felt some security seeing its big well constructed fence and decided to enter. Some centimeters of dust covered everything in there and the sign “toilettes” on the wall of an abandoned building convinced us to spend a wonderful night there! (Water and electricity were provided though!) So, we pitched our tents, had our dinner and fell asleep. 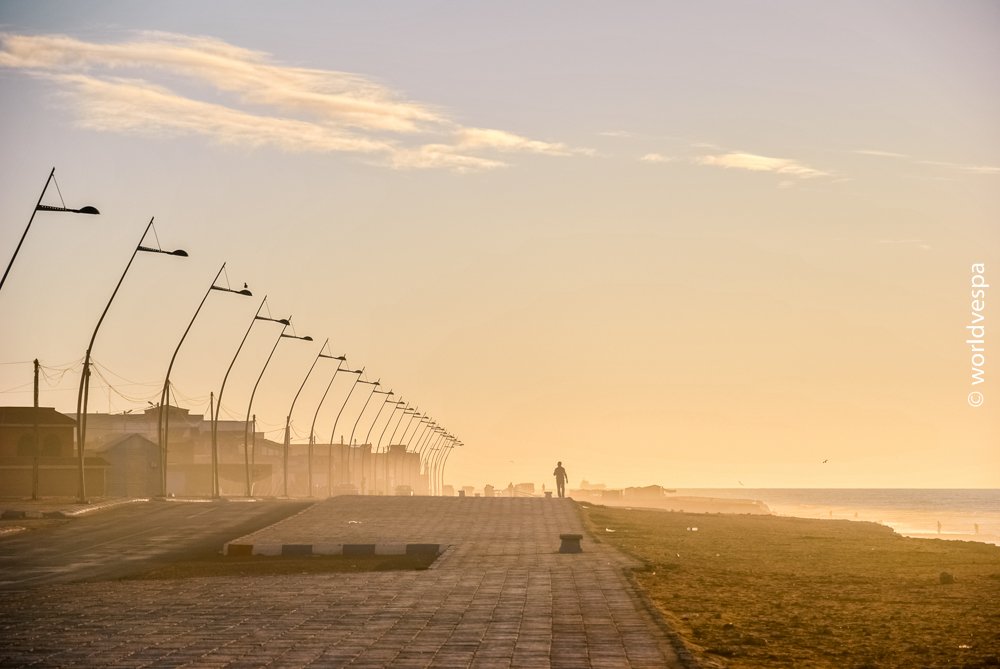 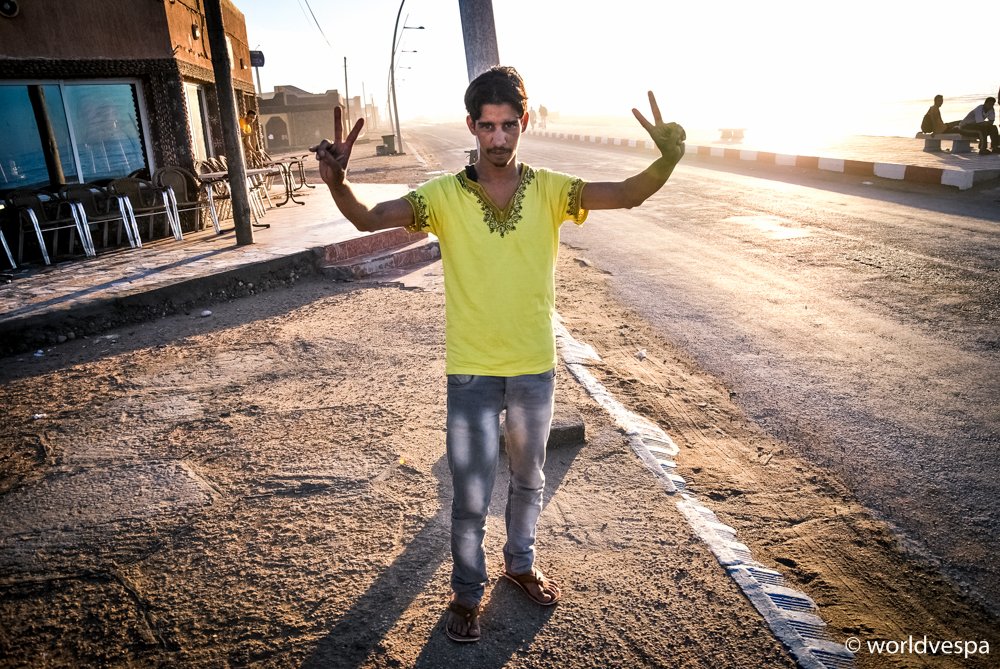 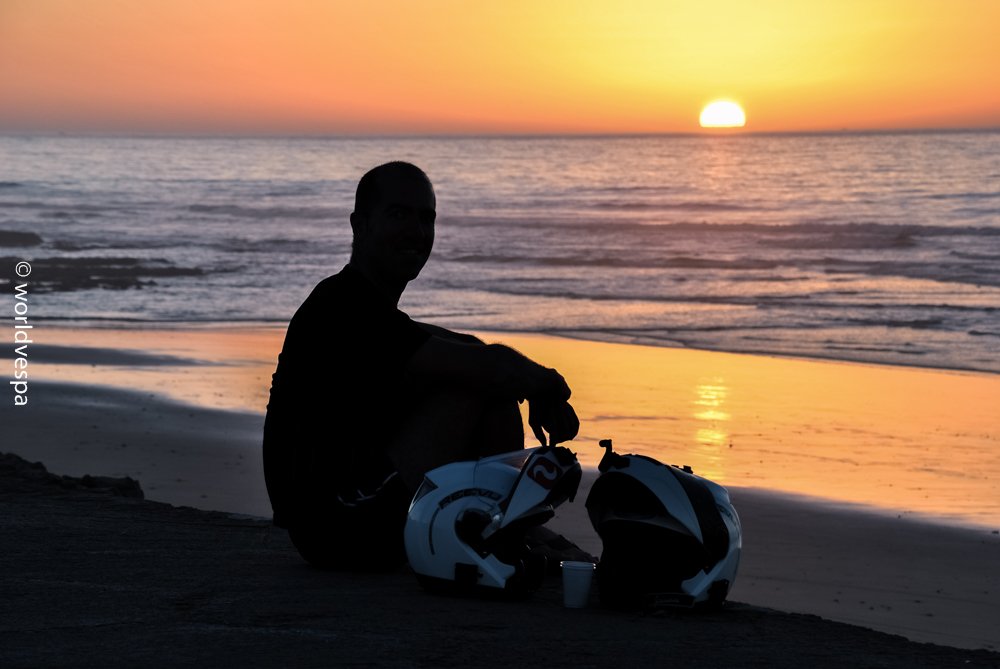 The plan was to sleep there only for one night but the weather changed dramatically. My tent turned once more into a fish tank but at least, the wind didn’t break it. After some time, we managed to go with all our luggage to a building under the sign “restaurant” and the owner of the campsite (with a very nice and thick mustache) let us sleep there and wait until our stuff dried. The best thing he did for us was to bring us some food (some lentils and some bread) cooked probably by his wife. He took pity on us, seeing us all wet and miserable! 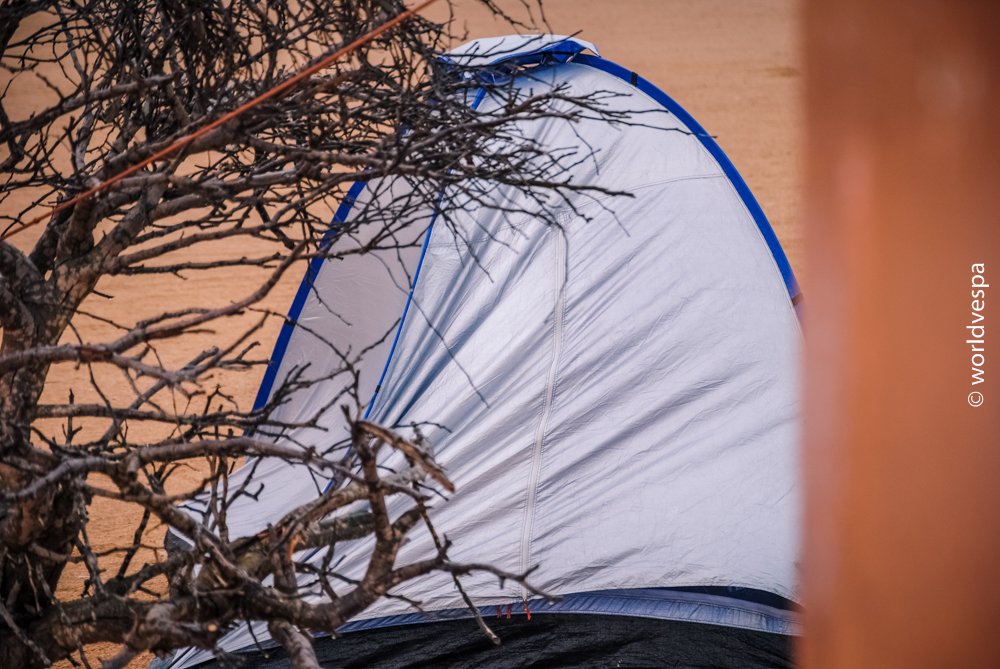 Bonjour was the next town we were planning to go to. We hadn’t found any campsite on our GPS in the area, so we were looking for a cheap hotel. We found out that there was a camping, but the price for one night there made me laugh sarcastically! (130MAD – usually we could find a campsite at 60MAD) The only thing we could do was to continue looking for a cheap hotel. After some time, we found a hotel and I went in to check if it’s decent enough. It was perfect: TV, free WiFi in every room and all these at a price of 120MAD! The decision was made, but now we had to figure out what we would do with our vespas.

Where should we park them for the night? The idea was to take all the luggage up in the room with us and leave the vespas parked outside the hotel. But the moment we said that, a bunch of kids arrived running and started playing with our vespas and our stuff, wearing our helmets and trying to make profit from us in any way they could imagine! “That’s why I don’t think it’s a good plan” Thanos told me and I totally agreed with him. Even the lady who was working at the hotel was yelling at those kids to leave us alone, frightened that she would lose her customers. They seemed more than spoiled kids making fun of us and unfortunately, we had to leave the place. So now, my idea was to continue on our vespas with the hope that we could find a nice remote spot to pitch our tents far from the eyes of others, maybe somewhere next to the Atlantic ocean…and that’s what happened: we found the best spot and spent the night in our tents watching the most beautiful sunset until that time! 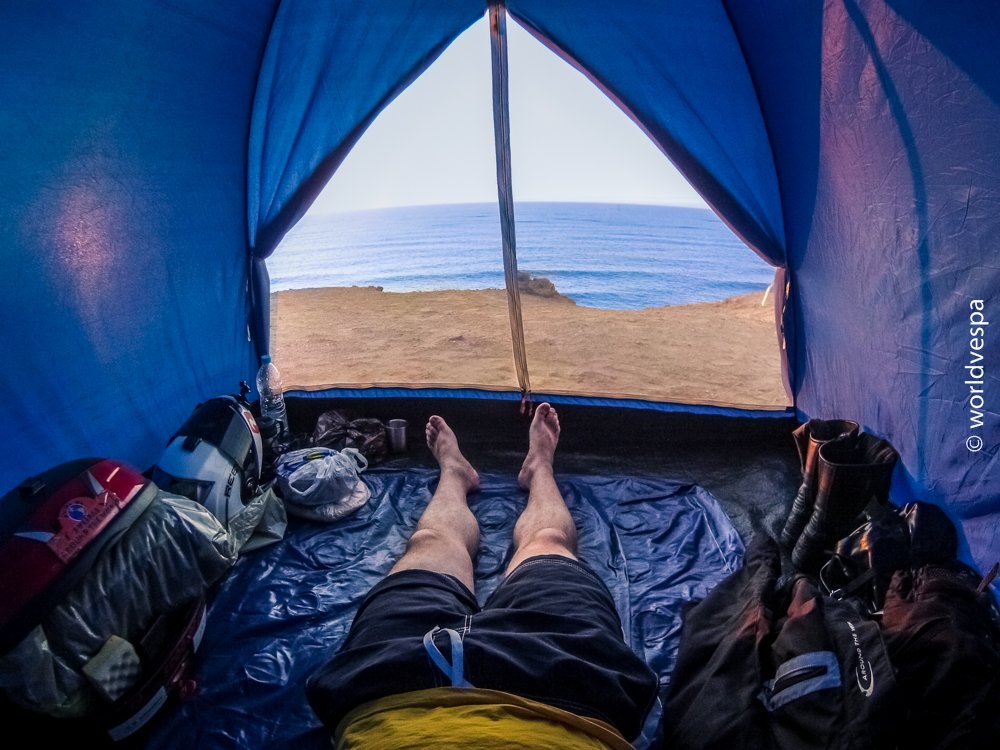 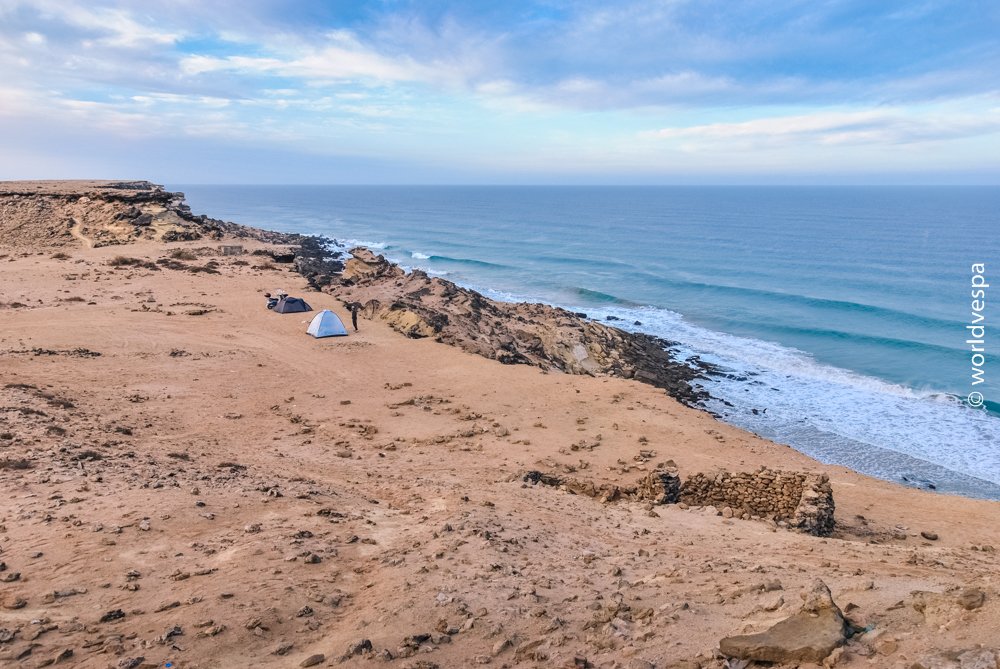 The next night again we stayed in our tents, not far from the town of Dakhla, in a really beautiful place were many people from Europe come with their caravans to stay for the winter! A German guy who was living there told us that this place, due to the strong winds in the area, is ideal for kite-surfing and fishing. The fish in that part of the sea are big and delicious. Before we got to that place we didn’t know anything about, we had met a guy from Korea riding a Yamaha YBR125, who was the one who gave us information about where to find it. He shared with us all of his adventures at the borders of Senegal, as he was returning from his trip (Paris – Dakar) and he told us that he had met a couple from Greece traveling on two enduro motorcycles. We were asking ourselves who could they be those two Greeks and then he told us: “Madnomad”! 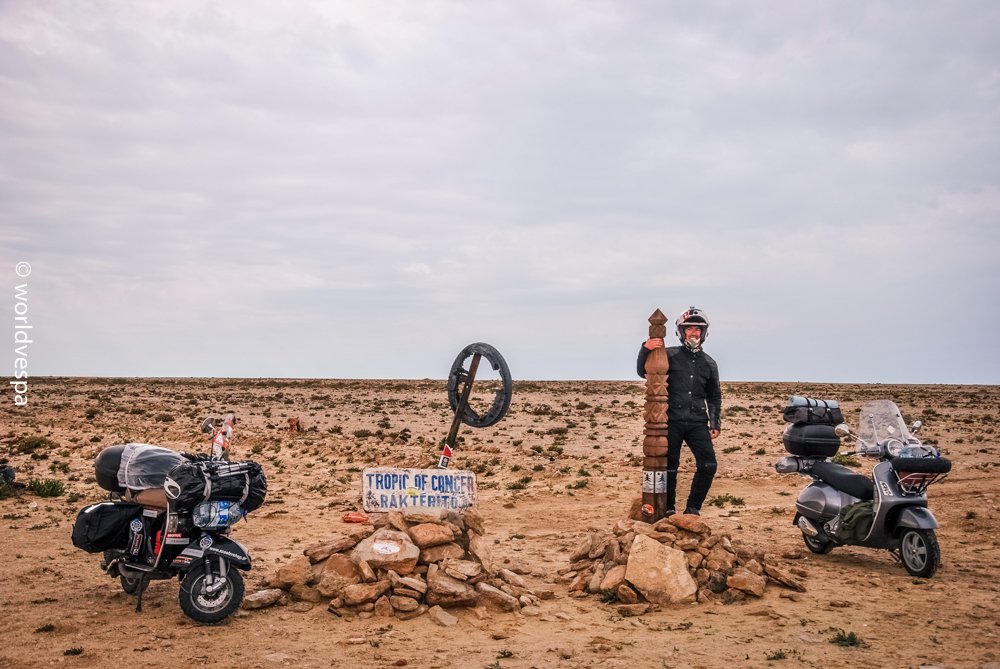 The night is going to be difficult, I know it. Clouds gathering above our heads and the smell of rain make it sure that it will rain…a lot! My tent is going to become a fish tank again and I’m really tired of that. At 22.00 I fell asleep (that’s odd…usually I can’t sleep before 00.00) and at 2.40 the rain begun. In less than 10 minutes I saw water in my tent, in 12 minutes the roof started leaking…the solution was easy: I put my cup to catch the leaking water and fell asleep again!