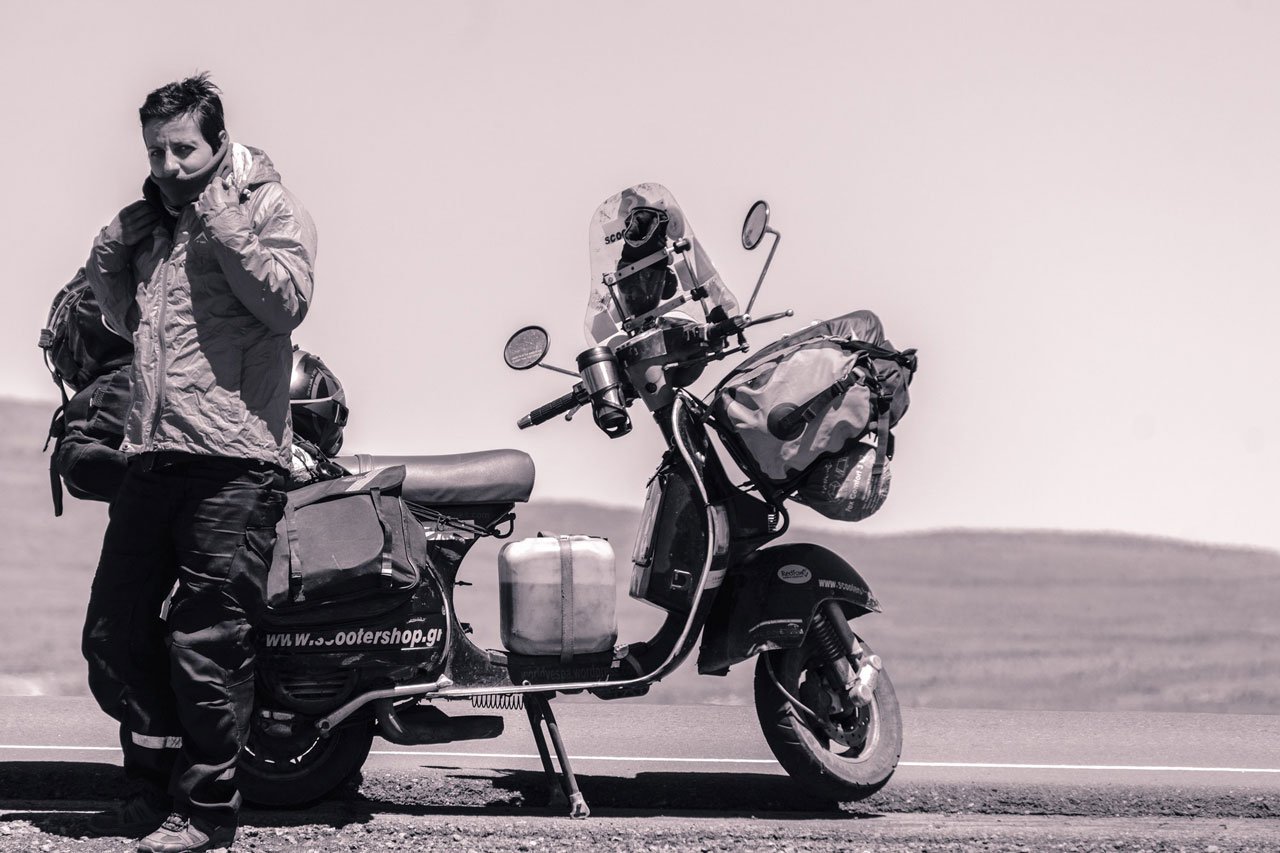 Discovering Peru on a Vespa scooter!

We left Bolivia with a slight pinch of sadness, but soon after we entered Peru, we were full of excitement again. As usual, we promised that we would return to Bolivia one day and that made us feel way better! We were going towards Puno, a town at the shore of lake Titicaca and throughout the whole trip up to there, we enjoyed the view to the lake. The landscape was very similar to that of a Greek island in the Aegean sea. The strong sunlight, the yellow ears of wheat and barley, the drywall constructions, everything reminded us something of a Greek summer. Only the woven, multicolored dresses of the women who were working in the corn fields brought us back to reality:

We were in Peru! 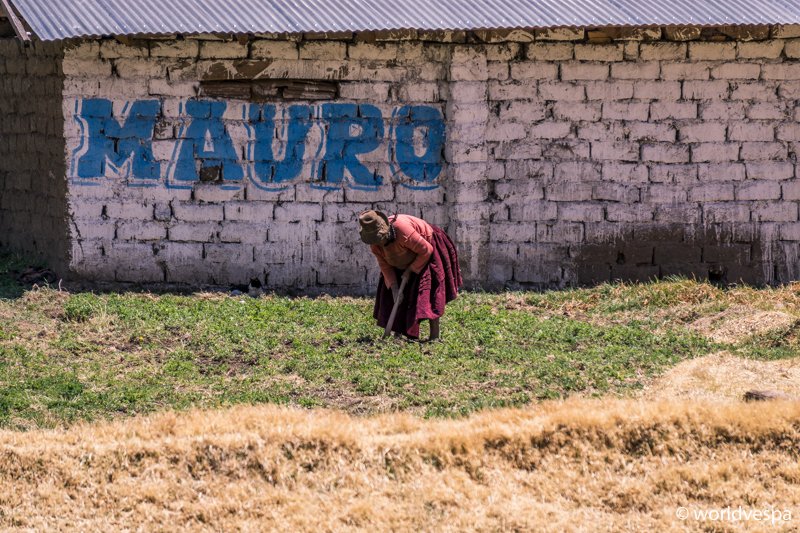 Puno is not far from the borders of Bolivia and what came to our attention was that Peruvians were not that different from Bolivians. Peoples and common cultures can not be divided by lines on maps and international treaties. The only thing that changed when we entered Peru, was that people we met on the road responded more vividly and happily to our greetings. We had heard a lot about this country: about its people, its culture, its famous cuisine, the Inca civilization, the present rates of criminality…Well, let’s see what we actually saw! 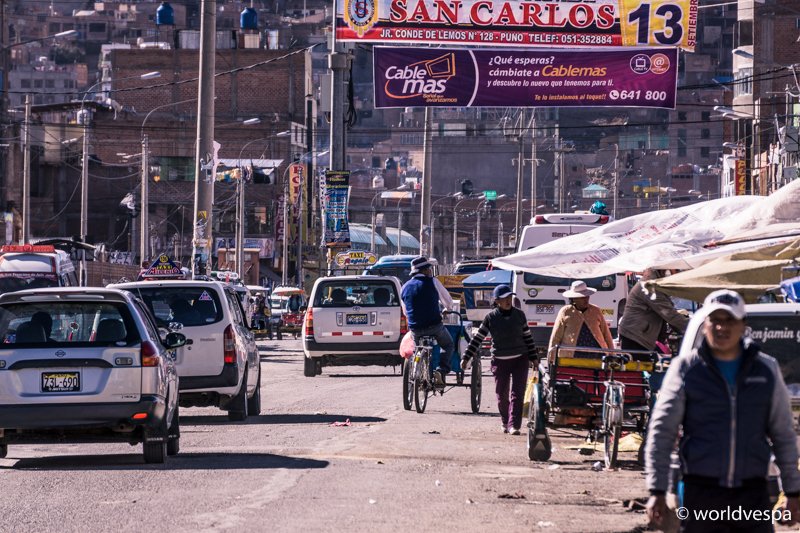 The moment we arrived at Puno, we started thinking if we were going to visit the “floating islands” (Islas Flotantes). They are small islands in the lake Titicaca constructed by the Uros (the people who live on them). Their whole surface is made from a specific type of reeds and they are a tourist attraction. We had been reading different opinions on various sites on the internet. Some visitors felt like they were visiting a place totally sacrificed to tourism and some others described their visit as a unique experience. 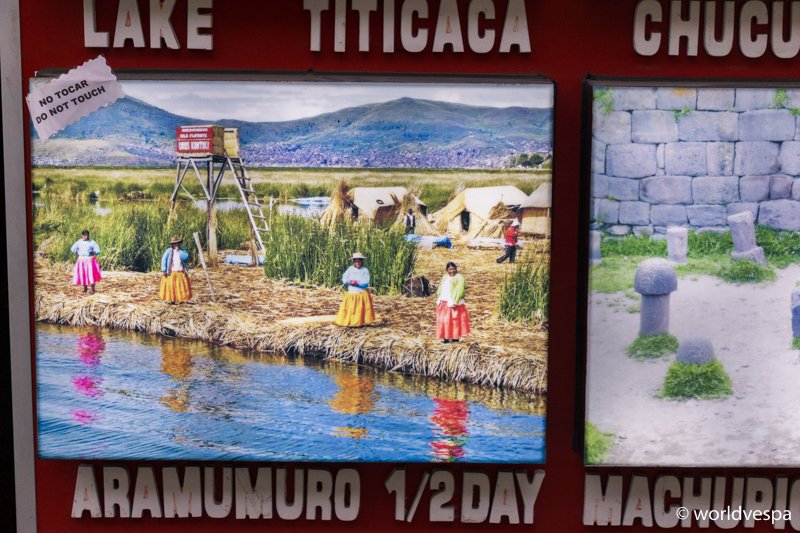 We decided not to go, after having read that the islands where the people live their “real” lives are closed to tourists and that they have permission to visit certain islands on organized tours only. Puno was an interesting small city with its modern and its more traditional neighborhoods. We walked in the city center, went (and dined) at the local marketplace and got surprised by a sign we saw about a Philosophy School under the name “Plato”. In Peru, the ancient Greek culture is highly esteemed and many people we met told us so. I even remembered the Peruvian truck driver who gave me a ride, when I was hitchhiking in Argentina, and told me the same thing about Ancient Greece. 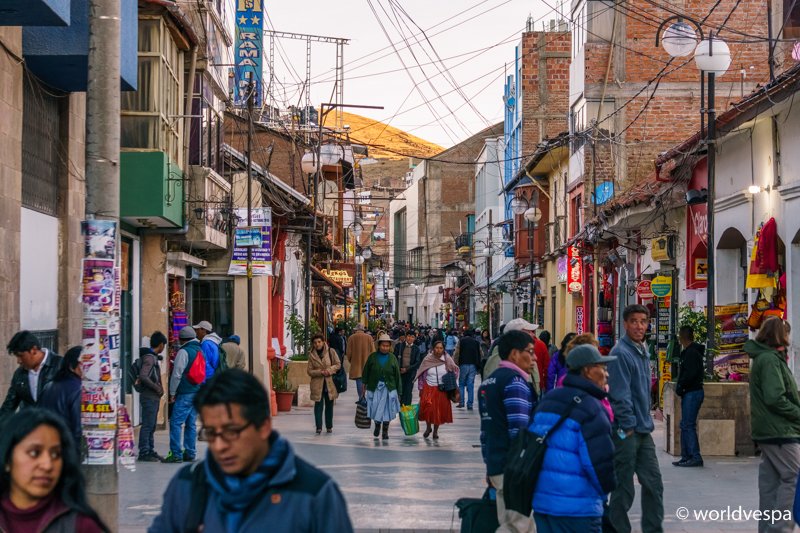 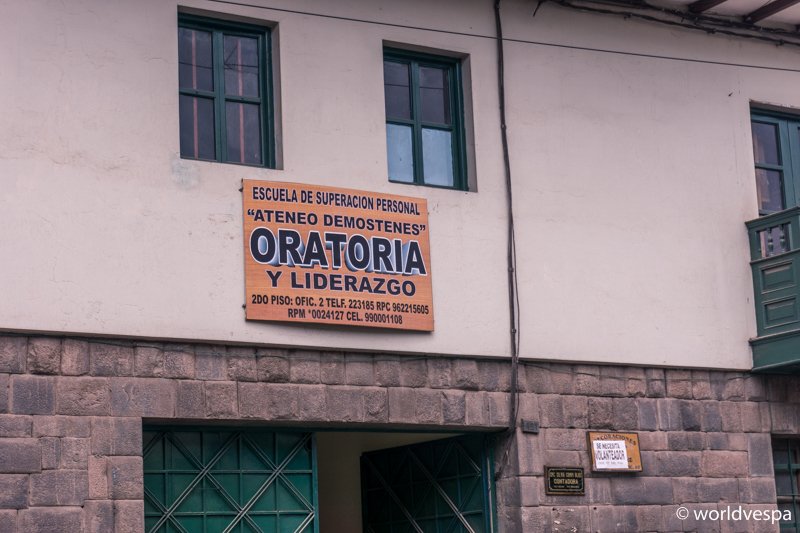 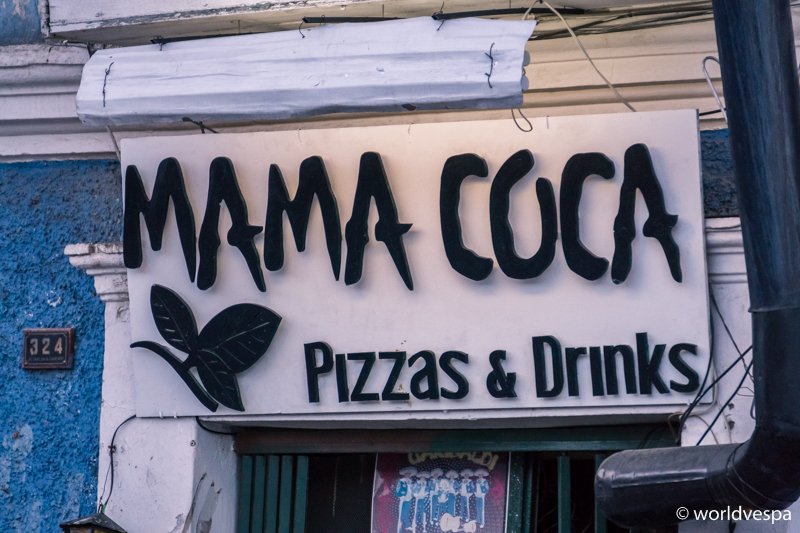 Our next destination was Cusco, the capital of the Inca Empire! We left Puno early that morning but it was impossible to be in Cusco on the same day, so we left the main road just before sunset and went to the first village we saw. It was a really small village and judging by the reaction of its people, it was not a place that a tourist would choose to visit. However, we knew that in a small, humble place like Santa Rosa there is a high possibility of having the most unforgettable moments. 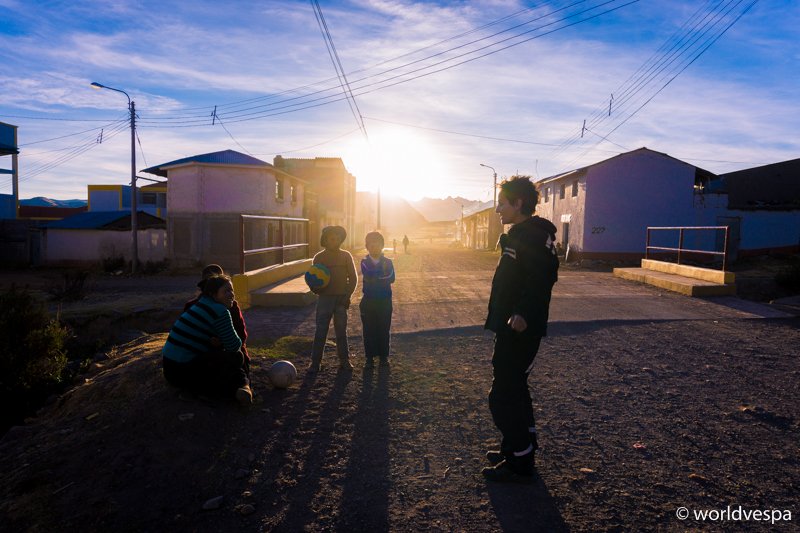 We rented a cheap but surprisingly nice room and we started walking on the main road of the village. Every single person who passed by warmly greeted us and we soon felt comfortable enough to take both our cameras and start shooting the everyday life of Santa Rosa. A woman around 45 years old was sitting on the side of the road with her teenage daughter and her two younger sons. When she saw us taking pictures of her sheep, she was really surprised. When I made a simple joke about the sheep being a photo-model, they all started laughing and the ice immediately broke! For the next 30 minutes we were talking about various things: they taught us some phrases in Quechua (the language of one of the ethnic groups of South America), we showed them where Greece is on the map and the teenage girl explained us how difficult the English language is to her. All 4 of them were really curious about us and we were curious about them. 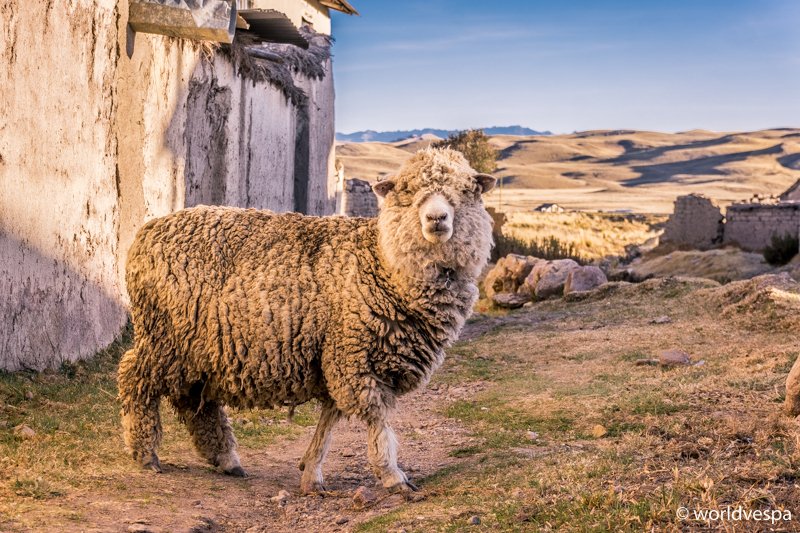 Maybe more than half an hour later, we explained to the family that we hadn’t eaten anything the whole day and that we were waiting for the local restaurant to open so we could have diner. When they heard it, the mother seemed a bit worried and she told something to her sons in Quechua. They left running and after a while they returned carrying 3 oranges. They offered us the oranges so we could eat a snack while waiting for the restaurant to open.

For once again, we saw that the real solidarity exists among people who have the less material things. We left the place carrying our oranges and thinking about all the things that made us leave the “civilized world” and we walked into the restaurant. The main course was a funny combination of rice, pasta and potatoes all boiled in meat broth, which gave them an interesting taste but not enough “moisture” to be easy to gulp! One tasty herbal infusion was included in the menu and off we went to have some rest and be ready to travel to Cusco the next morning. 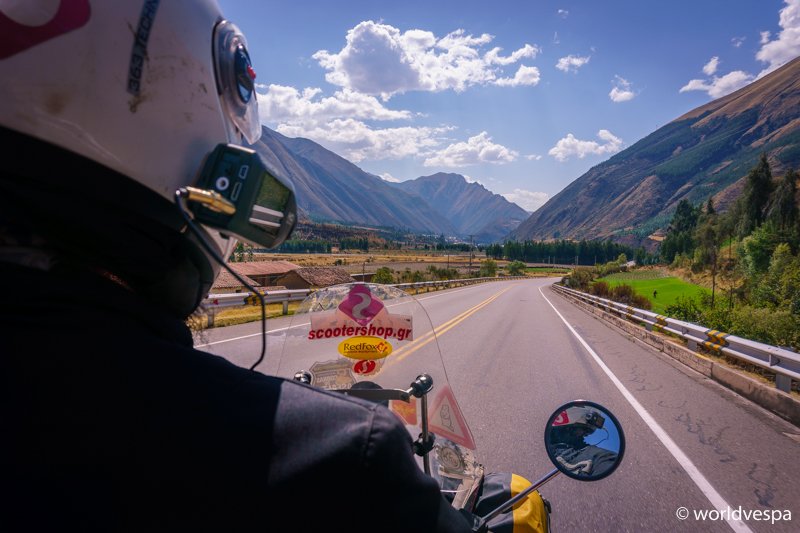 On our way to Cusco we didn’t have any unexpected surprises. The only thing that worried us a little, were the Peruvian drivers who seemed even worse than the Bolivian ones, but our first thought was to give them some time to prove us wrong. We had read a lot about Cusco and we knew that it is a well known city where all the tourists gather to start their trip to Machu-Picchu. However, we were in some kind of denial and we were expecting to find a small picturesque village ready to be discovered by us!

The city was of course bigger than that (some 500,000 people live there) and to get from its entrance to the historical center, we had to go through a nightmare of chaotic traffic and out of control drivers. We soon realized that in Peru there are absolutely no rules for any type of vehicle and the next moment a bus came into our lane with no prior warning! We only needed one second to be sure that we were miraculously alive and Stergios immediately started kicking the bus being completely furious! “Let’s leave this f**king place!” was his suggestion but I insisted that he should keep driving (he had enough experience to survive roads like these) and get to the historical city center. We didn’t regret it! The historical center of Cusco was really beautiful. Of course, there were thousands of tourists walking in its streets, but it didn’t bother us at all. 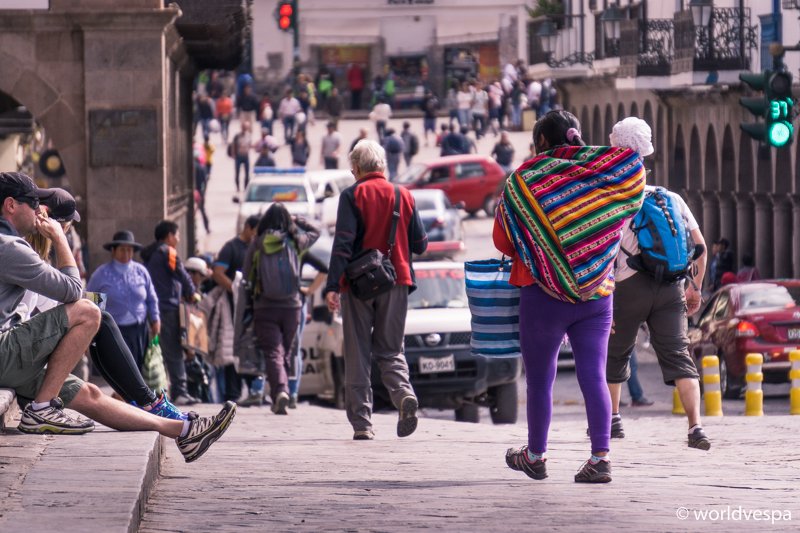 When we started looking for a hostel in Cusco, we found everything a bit overpriced but just before taking the final decision to find a place outside the city, we asked the price for a room at a small guesthouse which seemed very cozy. We were lucky! We found the price for a double room very reasonable and we decided to stay there for some days. It was an old building (18th century), constructed according to the traditional architecture of the region, with an internal patio. On the store, there were balconies and the whole construction was based on thick stonewalls and wood. Its owners were really hospitable and everyday, they were waiting us for a small chat.

We found all those things we usually look for at a new place: colorful marketplaces, kind ladies who sell various products unknown to us, nice narrow streets to walk on…Of course, we accompanied our stay at Cusco with some interesting culinary discoveries! For Stergios, it was the discovery of the Chinese cuisine (there are plenty of Chinese restaurants in Peru) and for me, it was the unexpected pleasure of eating “mazamorra morada”, a south American desert – a “purple pudding” made of purple corn and fruits served in a bowl with some rice pudding, too. Divine! 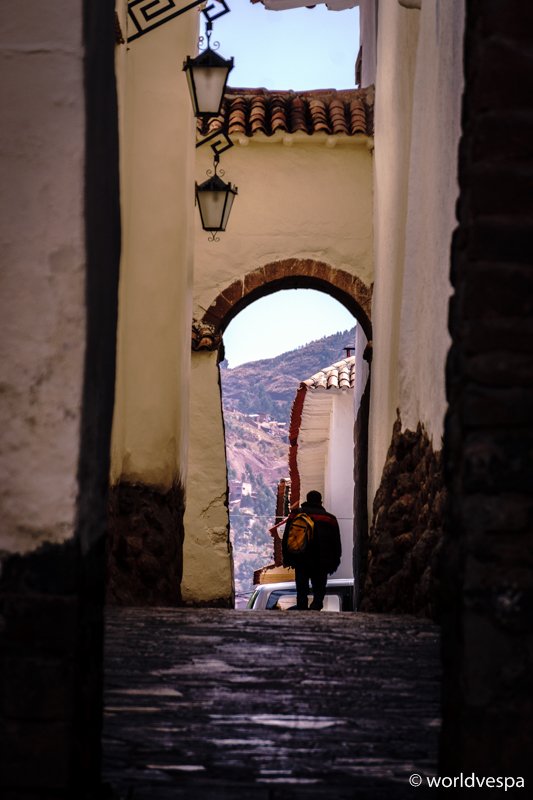 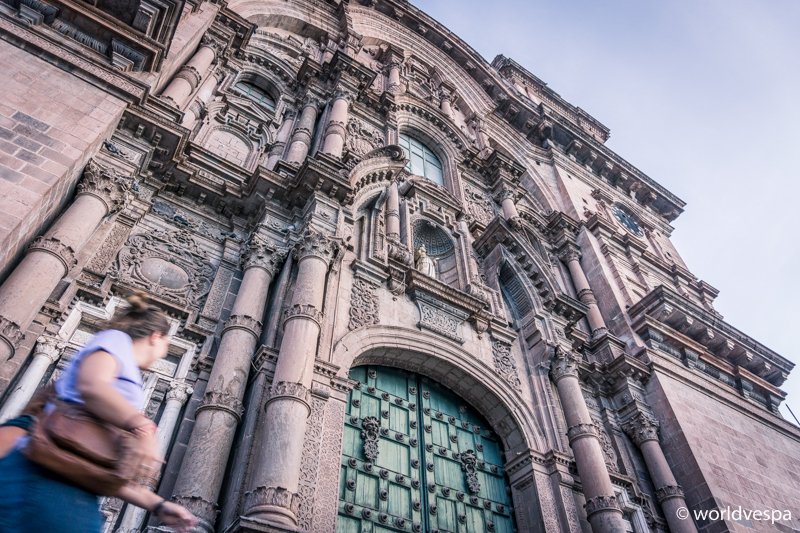 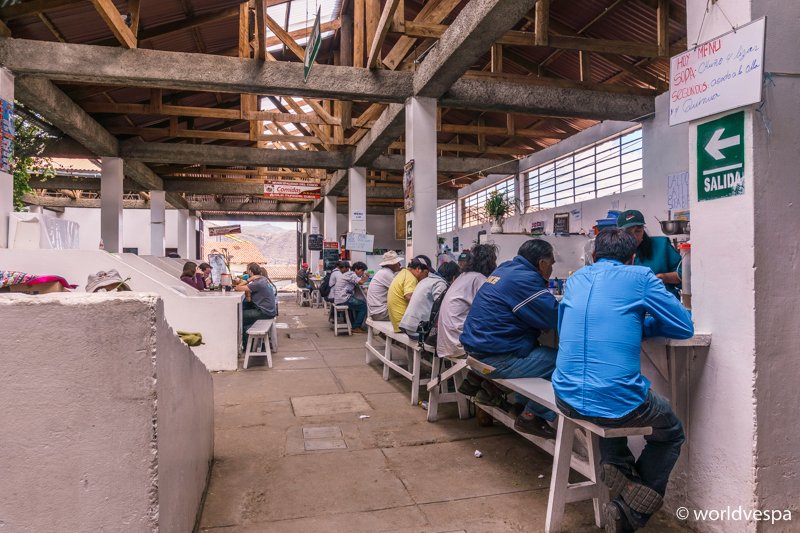 Peru is a well known tourist destination, so we were not surprised when we were meeting people from all around the world strolling in Cusco’s narrow streets. What we hadn’t imagined though, was that someone so far from Greece could recognize what the logo “SOS Halkidiki” on Stergios’ jacket means. Andrei, a young man from Romania approached and asked us if we were Greeks. He then explained us that he was aware of all the environmental and social issues at the Halkidiki region. The huge problems caused by massive mining exploitation and the corrupt politics behind all these. He had stand for “Roșia Montană” in Romania, when its people gave the same fights as the people of Halkidiki do now. It’s a small planet after all and we were happy to meet a person with whom we shared so many things in common.

However, the most important meeting we had, proved to be that with Galia and Doron, the couple from Israel we had befriended some time ago. We had first met them in the North of Argentina some months ago and we had been in touch since then. When you are on the road, friendships can be way deeper and we were really lucky to be in the same place with our friends again. We spent a day together, we laughed, we shared our new experiences and late at night, we said goodbye and promised to meet again. However, life hides some nasty surprises…After some months, Galia unexpectedly died from heart attack and this left us shocked but determined: we wouldn’t let even one day pass without making the best out of our lives! This is Galia’s legacy…

We spent some days of relaxation in Cusco and we were feeling ready to continue with the next part of our trip in Peru. We had decided to ignore Machu-Picchu and visit its undiscovered (at least, not that over-exploited) sibling: Choquequirao… 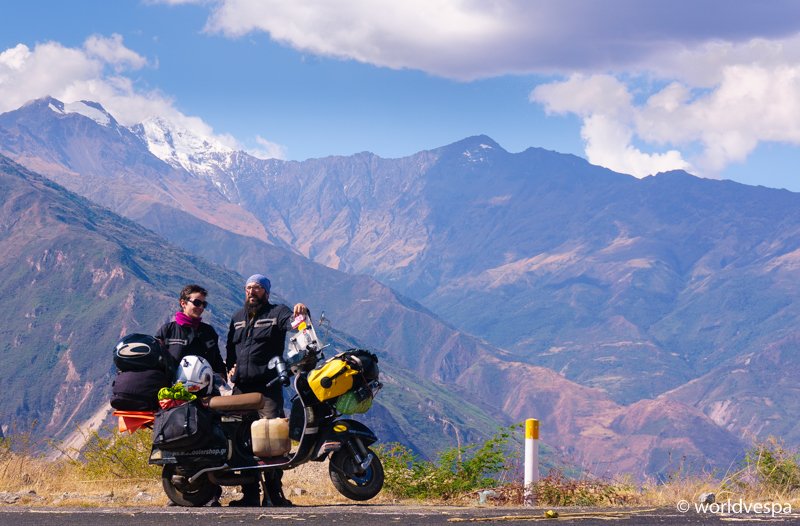 On our way to Choquequirao / Στον δρόμο για το Τσοκεκιράο