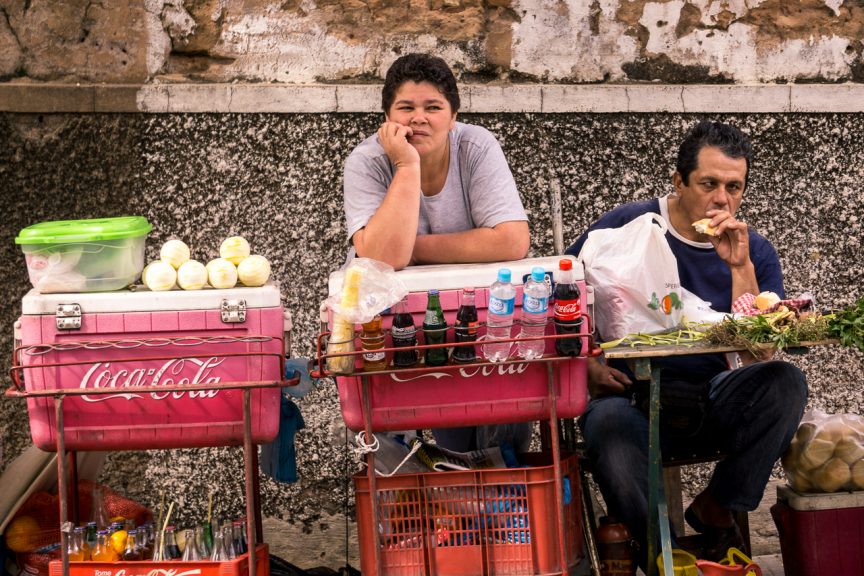 The cuisine of Paraguay is a unique fusion of Guarani, Spanish and other culinary cultures coming from the immigration received by the nearby countries. The result is delicious, so here are our favorite recipes!

Some time ago, when I was writing about Paraguay, I promised you that one day we would publish more details about our whole six months in that amazing country. And since we all have our priorities in life, I chose to start with...food!

It wasn't very easy to choose which recipes we'd include and we sure have left some outside. But we decided that it's more interesting to write down the foods that we liked the most, than to just make a list with popular Paraguayan recipes.

So, here you'll find some famous and some not so famous recipes, with one thing in common: our love for them!

Mbejú – Our favorite! I don't think that the phrase: “I've had enough mbejú” can exist. This is a starchy cake-like patty made with mandioca starch, crumbled cheese (queso Paraguay), pork fat (or oil, or butter) and milk (optional) and then sautéed in a pan. If you're wondering how much we liked it, I dare to say that we could ride all the way back from Tierra del Fueago just for a freshly baked mbejú. You can find variations with different types of stuffing, such as the “chipa so'o”, which means chipa stuffed with minced meat. Traditionally, it used to be a Holy Week recipe, but fortunately nowadays it can be found everywhere all year round. The best moment of the day is when the van with the loudspeaker approaches and you hear: ““Chipachipachipachipa...chipa calentita...chipa recién salida del horno...chipa almidón, chipa so'o...” and you run down the stairs to stop the van and buy one or to bags of chipa! Our friend Analia, preparing chipas in the oven, during the Holy Week.

Mandioca – In Paraguay it's called madioca, but you'll probably know it as “cassava”. It's the starchy tuberous root that accompanies literally every Paraguayan dish. The root resembles a potato, but it has sweeter taste and smoother texture, if it's freshly cooked. Meat broth with pasta and mandioca on the side. (Santa Rosa del Aguaray)

Paraguayans take mandioca for granted and tend to laugh when we mention how much we enjoy eating it plain. It's so simple and at the same time, really tasty (note: we love it with a pinch of salt or some hot sauce).

Pastel mandi'o – An “improved” empanada. This is the pastel mandi'o. We take mandioca flour, we make a dough, we stuff it with whatever we want (minced meat, mainly) and we fry it! How can it be sooooo delicious?!

Mandi'o chyryry – If for some reason you didn't eat your plain mandioca and after one or two days in the fridge it now has a “fridgy” taste you don't like, here's how you can bring it back to life (and tastiness): cut it in pieces, add cheese (queso Paraguay), onion and whatever herbs you have and throw them all in a pan along with whisked eggs. Now you have scrambled eggs “a la Paraguaya”!

Surubí – This is a very suspicious looking freshwater fish that unfortunately for it, it has the bad luck to be delicious! We have tried it as a “milanesa de surubí” (schnitzel-like recipe) and as “sopa de surubí” (soup). And we liked it in both recipes, but the strange thing for us in this particular soup, is that it is made with milk and cheese. Weird but tasty! Waiting for the food... (Mercadito, Asuncion)

Chipa Guazú & Sopa Paraguaya – We put these two in the same category, as they're both savory cakes and their only apparent difference is that the first one is made with corn kernels, while the second one is made with corn flour. The rest of the ingredients are: onion, cheese (queso Paraguay) eggs, oil (or fat) and of course, they're oven baked. You'll be lucky if you try these, or other Paraguayan recipes in the “tatacuá”, the mud ovens that can be found in almost every house in rural Paraguay.

Tortilla – In every country, “tortilla” is a different thing. In Paraguay it's a fried dough made with milk, eggs, flour, cheese, scallions, salt and pepper and it's as simple as that! And now that I mentioned it, I think I need to eat at least half a dozen... Menu on the wall, with some popular Paraguayan dishes. (San Pedro del Yucuamandiyú)

There are more dishes that we tried and liked: soups, stews, oven-baked and fried goodies. There is also the famous “asado”, the widely popular barbecue of which all Paraguayans are proud. And if you're wondering about the names of most of the dishes and why it's so difficult to be pronounced, that's because of the great Guaraní influence in the Paraguayan cuisine.

Enough with the main courses and the snacks. Let's go to the dessert now:

Torta hû (torta negra) – We bumped into this cake in some supermarket and we reluctantly put it in our basket. And when we cut a piece and tried it next to our morning coffee... Oh, yes! It's a very simple cake, made with flour, oil and sugarcane honey. How the hell can it be so delicious, I don't know!

Ka'í ladrillo (dulce de maní) – Sugarcane honey and peanuts. This. In a pot, you put the peanuts and the honey and you stir until it hardens. Then, you put it in a recipient and when it's cold you cut it in bricks (ladrillos). Tasty and nutritious and you can carry it around in your scooter's saddlebags for days.

And if you got thirsty with all the above, here are some beverages:

Tereré – The ideal beverage for the infernal summer heat of Paraguay. It's the classic Latin American mate, but cold! Usually, the herbs used to make tereré are fresh and you can buy them from stalls that you can find literally, in every corner. Extra advantage: the ladies who sell the fresh herbs, know all their medicinal properties and they'll make you the right mix for whatever is that you may suffer from. 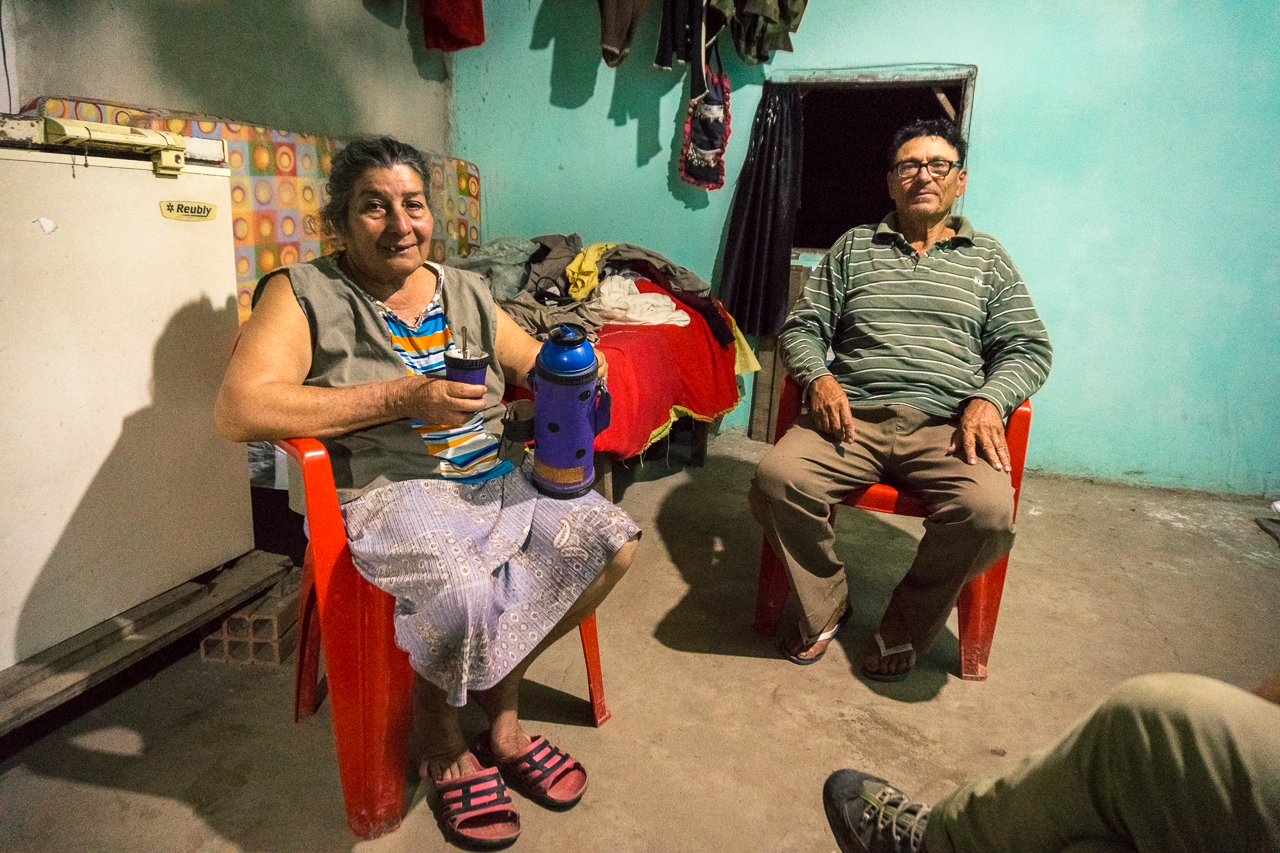 Mate cocido quemado – Our favorite! Unique! This is the weirdest hot beverage we've drunk and loved until now! You take dried mate leaves, you throw them in a pot along with sugar and a piece of burning charcoal and you start stirring them all. When it starts getting smoked, you pour hot water, the charcoal goes out and you pass the beverage through a fine strainer. The result: a divine sweet and smoked mate!

Well, that's it and if you know the Paraguayan cuisine, you might say that there are dozens of recipes missing from our list. And you're right, of course. That's only one of the reasons why we'll return to Paraguay: to try the rest of them. But for us, Paraguay will always have the sweet smoked smell of cocido quemado and the taste of anise and cheese of a freshly baked chipa...