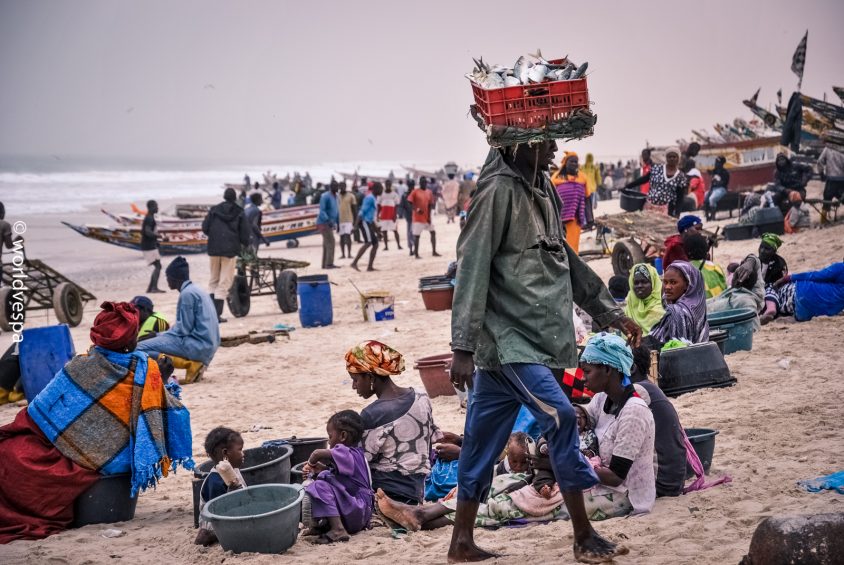 Two weeks ago, we entered Mauritania. The procedure we had to follow in order to cross the borders was much simpler than we expected according to what we had read. It took us less than 2.5 hours and that, only because we had to drive in a very low speed through “no man’s land” – the zone that divides the two countries – where no-one has taken the responsibility to construct a road. We drove through dirt, rocks and stones to reach Mauritania.

We also earned some time because we were on motorcycles. The police officers and the other drivers let us pass without waiting in the queue for ever. In the region of Western Sahara, a police officer asked Thanos to give him his sunglasses but we pretended not to understand what he said, so Thanos kept his sunglasses! When we entered Mauritania the police officers tried to convince us that the only place to park our vespas was on a sand dune! We tried to explain them that it is impossible for the vespas to climb there, but they wouldn’t believe it. They were convinced only after we tried – with no luck – and sank in the sand!

We were surprised that everyone was trying to give us directions about where to park, where to go, even where to…breathe! In our case they were just trying in vain…Before we even got off our motorcycles, a bunch of people circled us! They wanted to sell us currency, cigarets, insurance and of course they claimed to be “fixers” (those people who you can “hire” to help you with the documents and the bureaucracy). One of them, who had shown us where to park, almost took the documents from our hands but we were faster than him and we managed to avoid them all! Thanos went into the building first, as I stayed outside keeping an eye on the vespas. We had read that we should pay for an insurance for the motorcycles (1 euro per day) and that they wouldn’t accept our “carnets de passage” because Mauritania is not on the list and that we should pay 10 euros each for the vehicles, but we wanted to see which of these information were true or at least try to avoid some costs. And it worked! We didn’t pay for insurance and to everyone who asked we said that we already have one. Let’s see how it goes…

Our first stop in the country is Duadibou. What a mess! No one drives properly, old cars, goats and sheep in the middle of the streets. Horses, donkeys, Mercedes, carriages…everything in a chaotic situation! In this town we stayed only for one night, at the only campsite we found through our GPS and at a cost of around 10 euros for both of us. Here in Mauritania we realized that the prices for anything you want to buy are totally negotiable! For some simple grocery you may want to buy, (some tomatoes, cucumber. onions) they ask you for 4-5 euros (that happened to Thanos at a grocery shop). So, the only way to survive without paying a small fortune, is the endless negotiations… 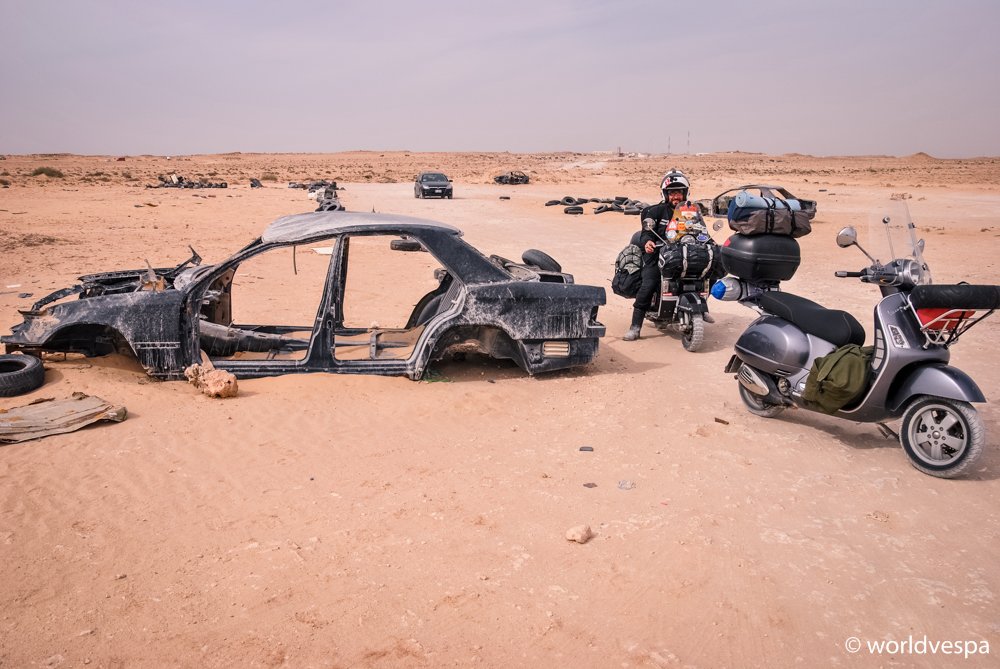 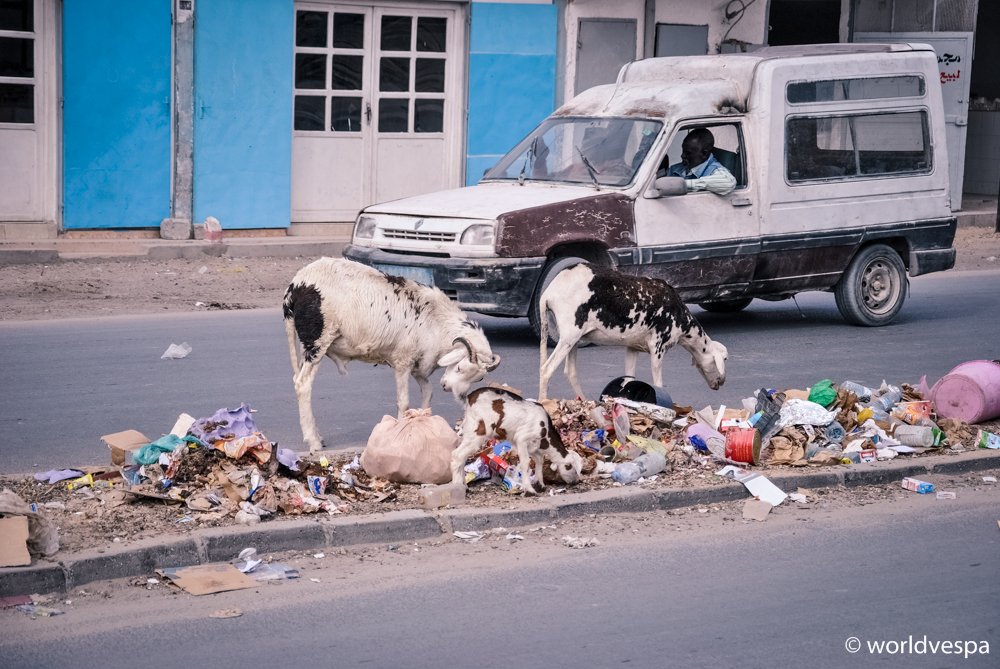 Eating from the garbage makes their meat tender and tasty! 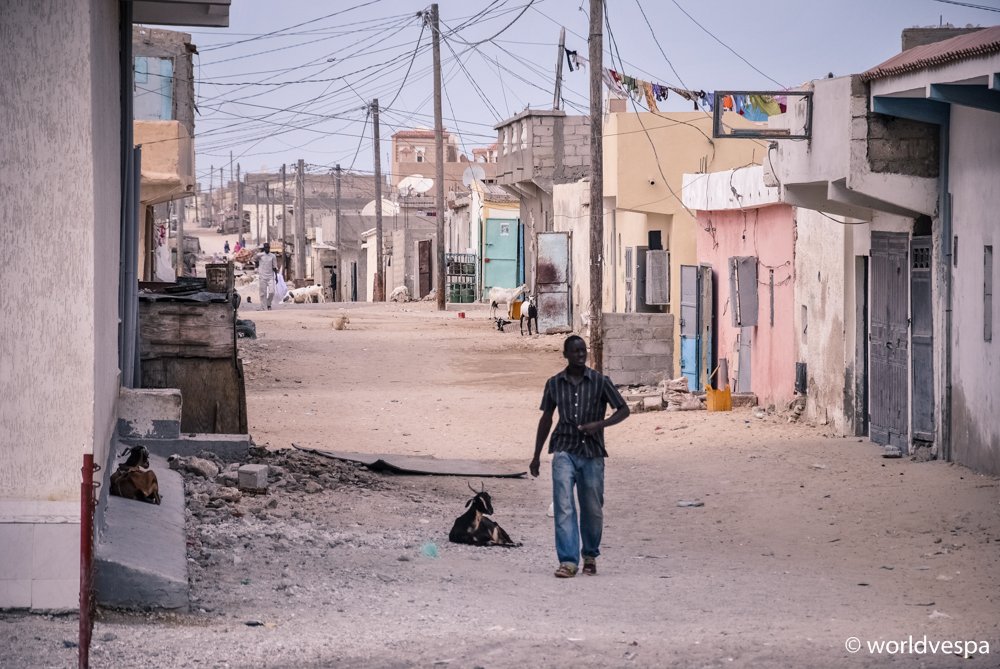 In every town there is only one central tar road. 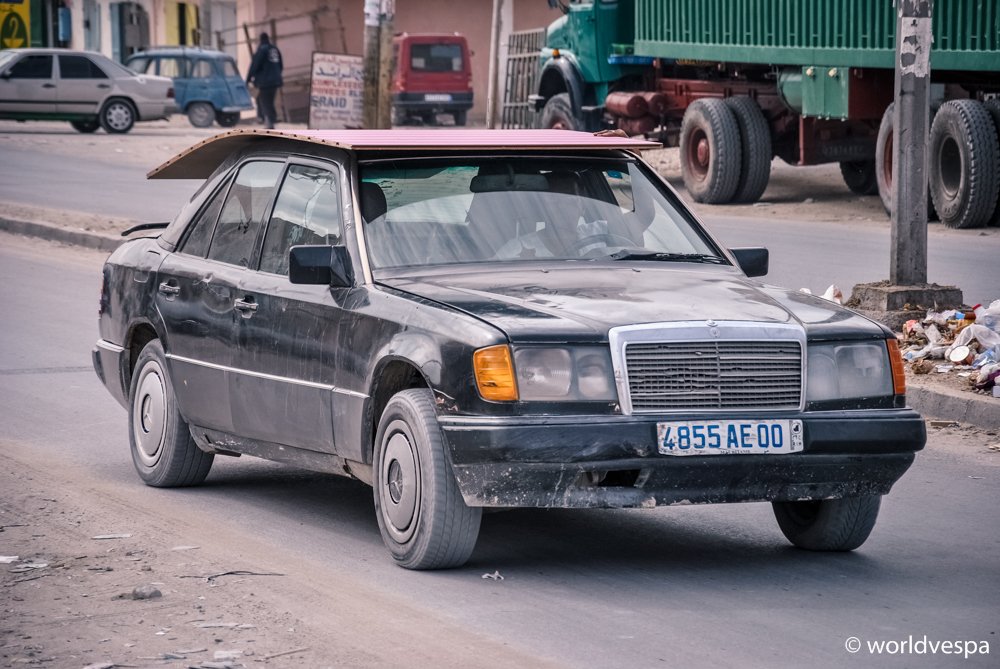 Attention to the Mercedes and also to the Toyota!

Next stop: Nouakchott, the town from were we would take our visas for Senegal. For 450kms distance until there, only straight lines and boring scenery. But here, we had our first true adventure. When we stopped at the first gas station, they told us that they do not have any petrol and the next one was at 90kms distance. That was not a very serious problem because we had an extra tank with us for any case of emergency. The actual problem was that there wasn’t any petrol at the next gas station either, so the only thing we had to do was to pitch our tents next to it and wait until the truck they had been waiting for, would come to refill the gas station. The owner of the neighboring motel came to ask for some money but he was so polite to us, that we didn’t get too concerned about it.

Next morning we got up early to go to the gas station and wait for the truck to arrive. The truck never arrived…Now we had a real problem! The remaining petrol in our tanks wouldn’t take us further than 85kms. And what if we would continue only to find that at the next gas station there is no petrol either? So, we decided to split: Thanos would continue further and if he could find petrol, he would bring some to me. If he couldn’t find any, he would call me so I would go back, in case I could find some petrol at the previous gas station. After waiting for two hours, a man approached me with a note: “Impossible to call you. Go find some petrol”!

Thanos’ vespa had run out of petrol around 30kms from where I was. The owner of the gas station advised me to stay there and wait so that he could made some phone-calls and find us some petrol. For some reason I wasn’t convinced to follow his advice, so I stack with the first plan. At around 12.00 I started going back from where we came wishing that I could find something. Highest speed at 45kms/h so that I wouldn’t run out of petrol very fast. I was hoping to get at least to the previous gas station where I could find something to drink or eat while trying to figure out what I could do.

After 2.5 hours I managed to get to the previous gas station. I had been driving for 100kms with less than 3 liters. Now, in my tank there were about 3…drops of petrol! Also nothing but diesel there. But many people were interested in my story and a” non-english non-french only-arabian” speaking bus driver (more of a 9-seats van driver who could put more than 20 people inside it and pretend it’s a bus!), promised me that around 21.00 he could bring me 20lt of petrol! He just asked me to wait there, so I did. (the body language is an international language very useful in situations like that!)

This kind man gave to one of his colleagues a 20lt tank which he filled up and at around 19.00 I was happy again. I hadn’t asked for the price, I just needed some petrol. Luckily, I paid 30 euros for 20lt of magic potion and left! At the capital, the only thing we had to do was to take our visas from the embassy of Senegal. We were a bit pressed by the deadline we had been given from the Mauritanians (only 7 days time – regardless of what was written on our visas) so we didn’t feel like staying there for more days, even if we could do that. 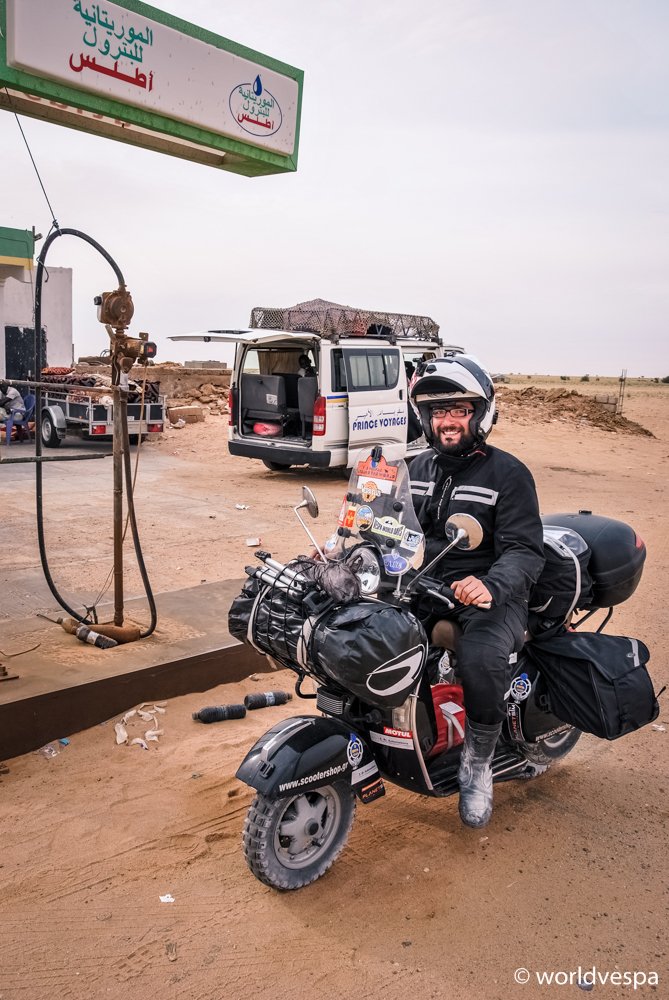 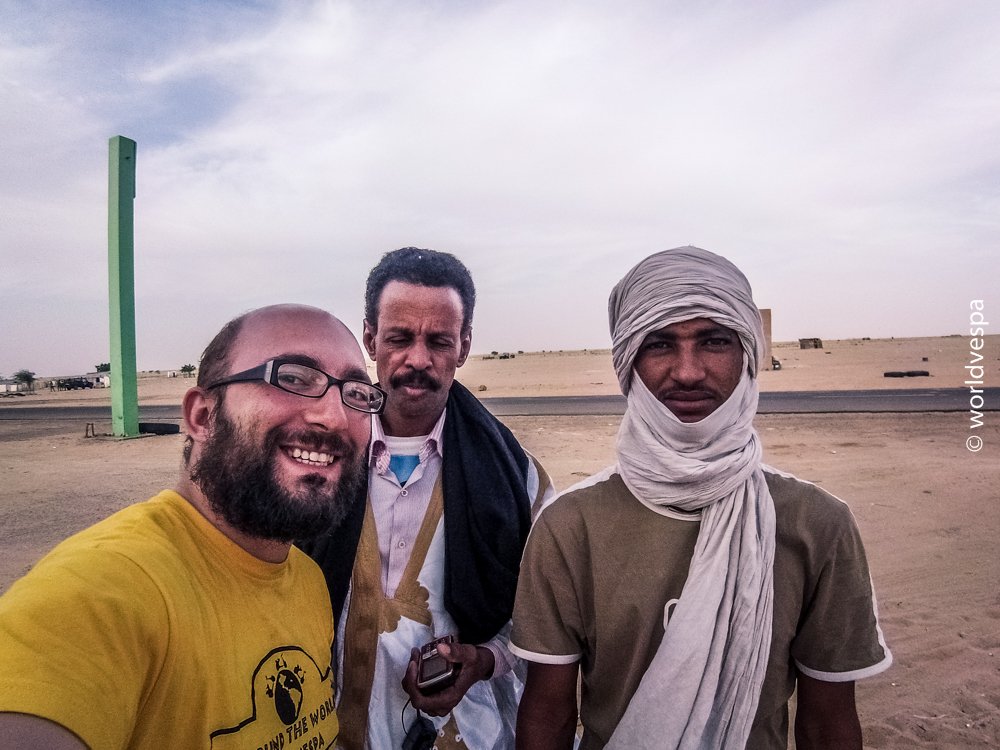 At the inn (“auberge” -en français) where we were staying, we met an amazing Spanish guy who was traveling with a KTM with the intention to go around Africa in 5 months. He had been staying there for a week so he knew thee place. He had a problem with the ignition and he had been waiting to receive the spare part to be able to continue his trip. We went with him for a walk around the city, extended our visas for some more days (with no extra charge) and ate the most delicious pizza until that time (Says Thanos – for me it was the first pizza for the trip). Apparently, our stay at Nouakchott got a bit prolonged. 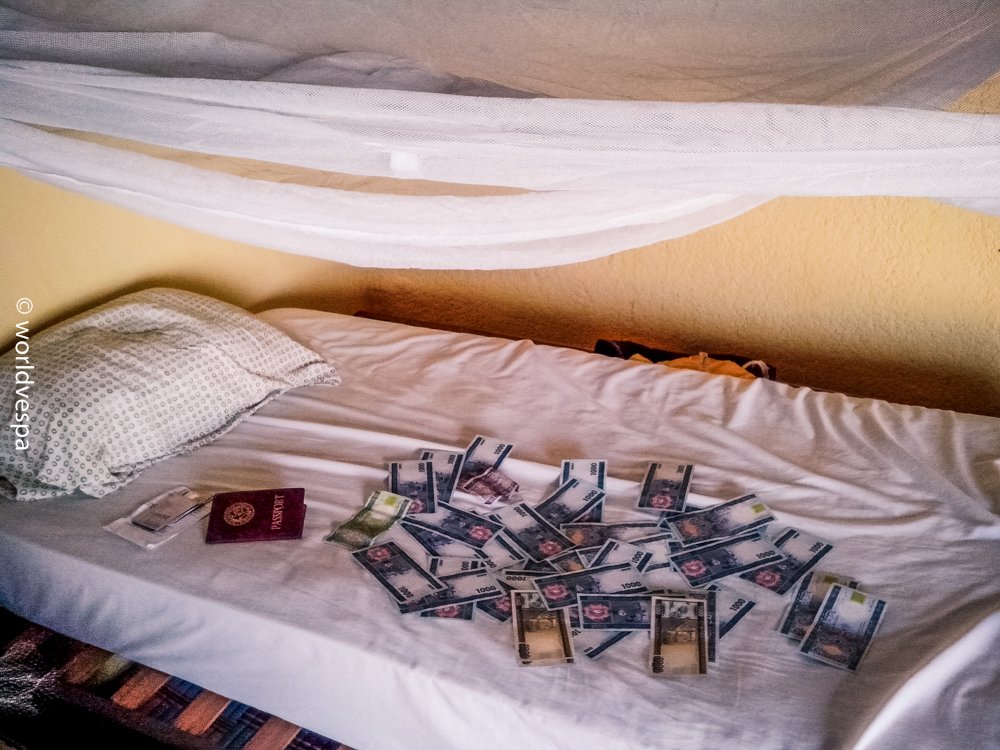 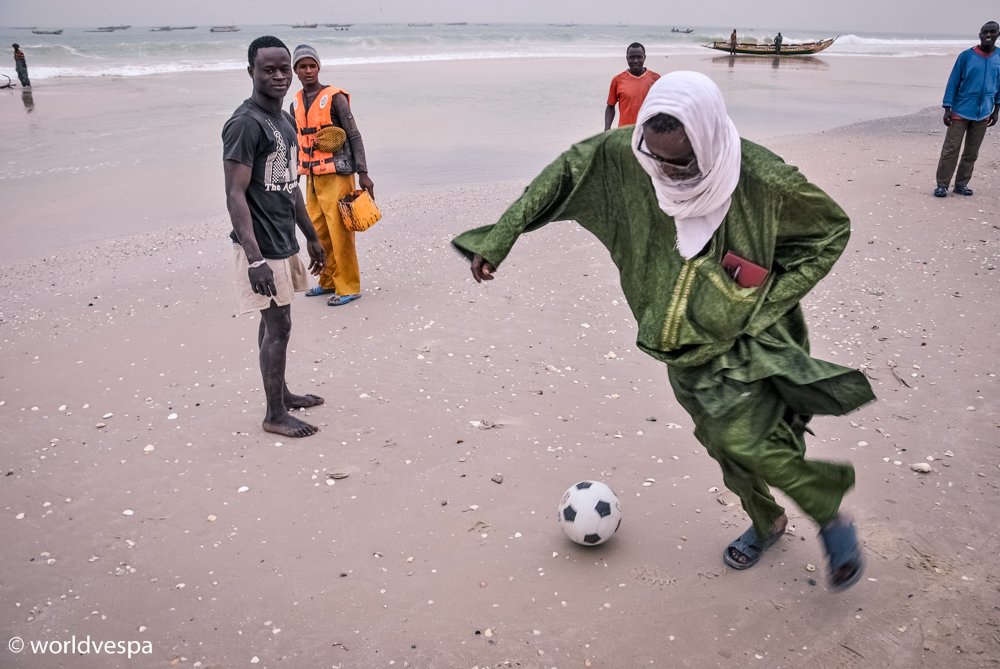 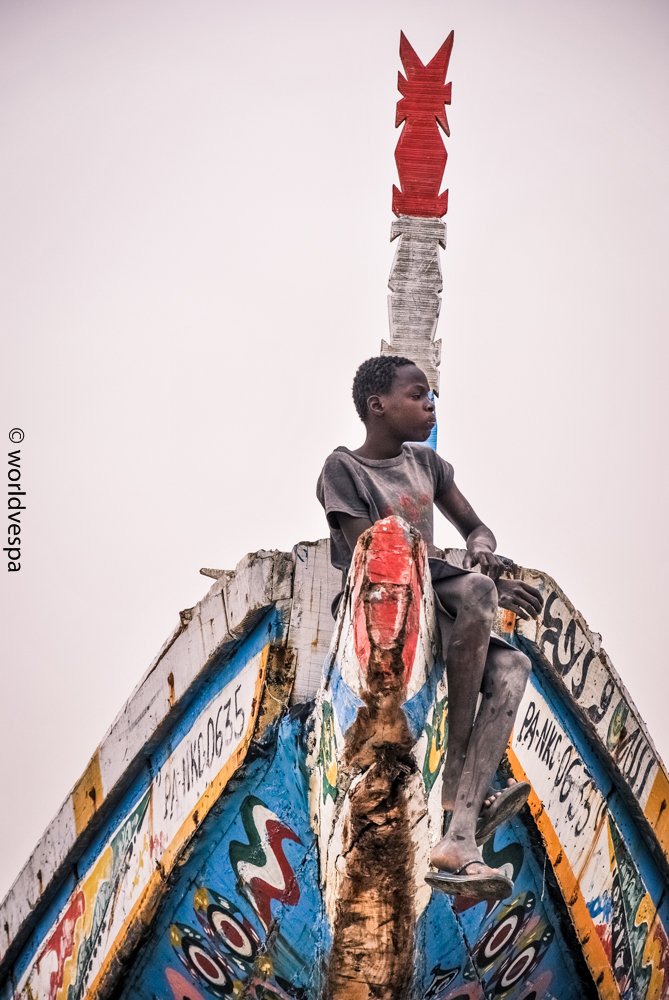 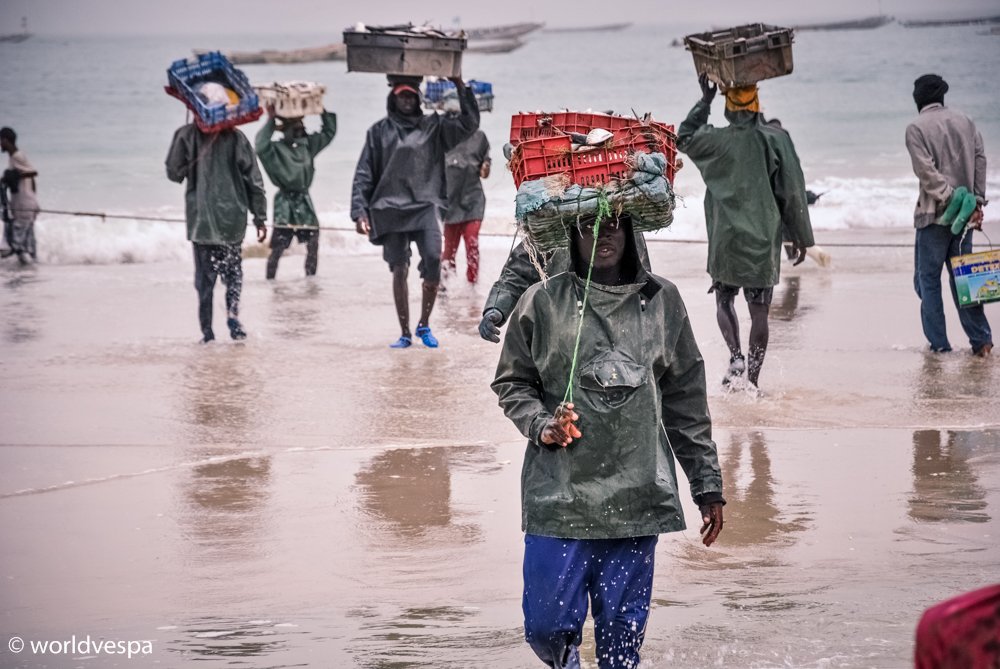 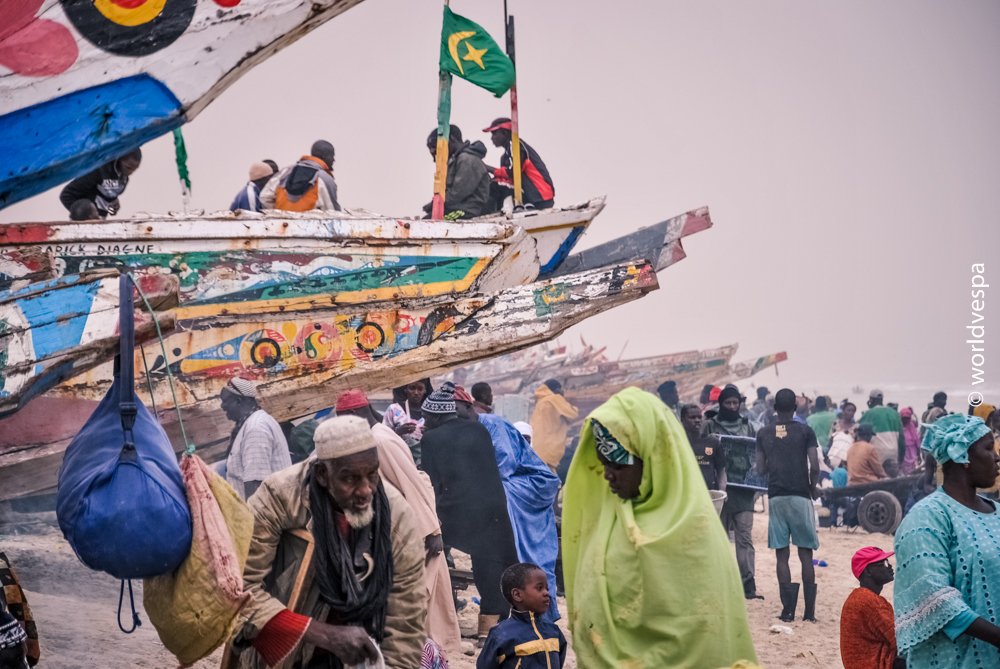 The next day, we met at the “auberge” an English guy on a Cub 90. He had it on a caravan from Nouadhibou to Nouakchott. Luckily! There wouldn’t be any possibility to meet us with the speed he had been traveling. Looks like we are going south together: 2 vespas and a Cub 90! At the hostel we were staying, we met Katarina from Slovenia. A nurse who is traveling alone on a bicycle(!) and wants to get to Madagascar…Suddenly, what we do seems too easy!