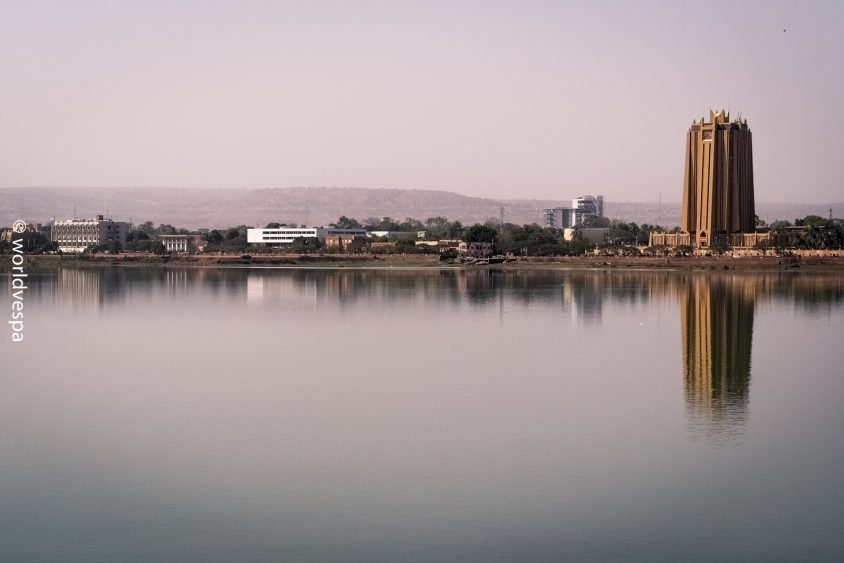 Bamako at last! After a long journey that lasted 9 days, after 8 night sleeping in our tents in forests, rivers and mountains, after 1520kms, we were there! They were the most intense, the most adventurous, the most real 9 days of journey until now! One more thing is that Thanos, after traveling together for about 2 months, decided to go back to Greece. He had his reasons. So, now I am traveling with Liam and we are planning to go until South Africa together.

The way Liam travels is very similar to mine and we have many things in common, especially our philosophy on traveling. He’s open minded and he lives every moment without worrying for the details. He likes adventure and he is open to every kind of challenge! We have already started to make some crazy plans for our route over the maps of central and south Africa (especially if someone takes into consideration what types of motorcycles we are on!).

I enjoyed every single day before our big stop in Bamako! It was something completely new to me. Every morning we used to wake up at around 7:00, coffee and breakfast, packing and riding for 100kms (or sometimes for 200kms so that we could find a nice place to pitch our tents before sunset). Always staying in our tents, hidden somewhere away from the eyes of the passing-by (or at least that was our intention), next to a river or in any place we found nice. Just arrived at "The Sleeping Camel”. 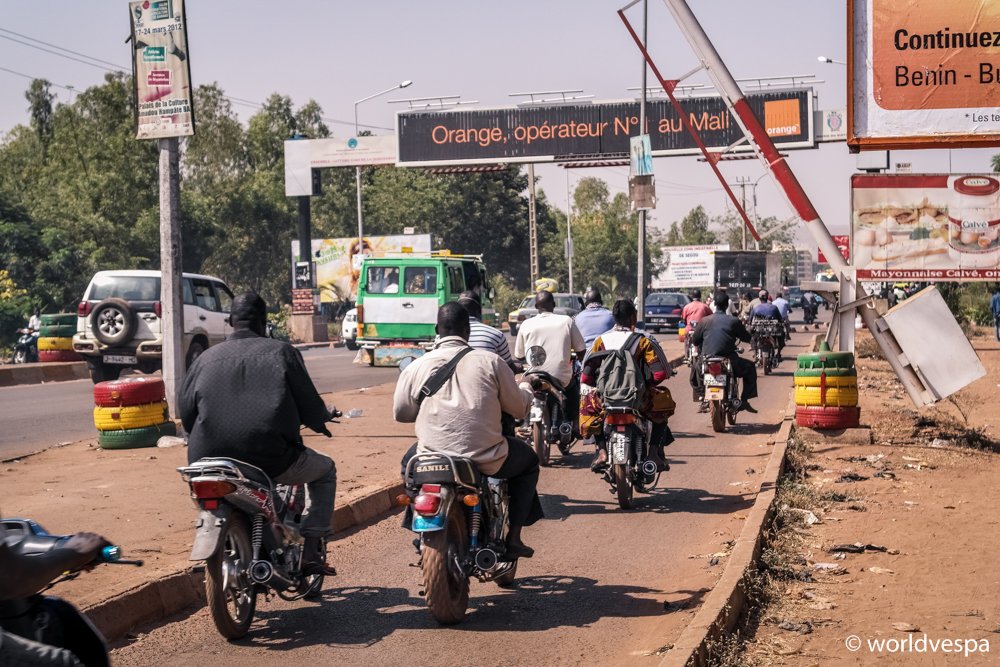 I don’t know why but I really like Bamako. Maybe because it reminds me of my hometown, Thessaloniki, back at the good old days. 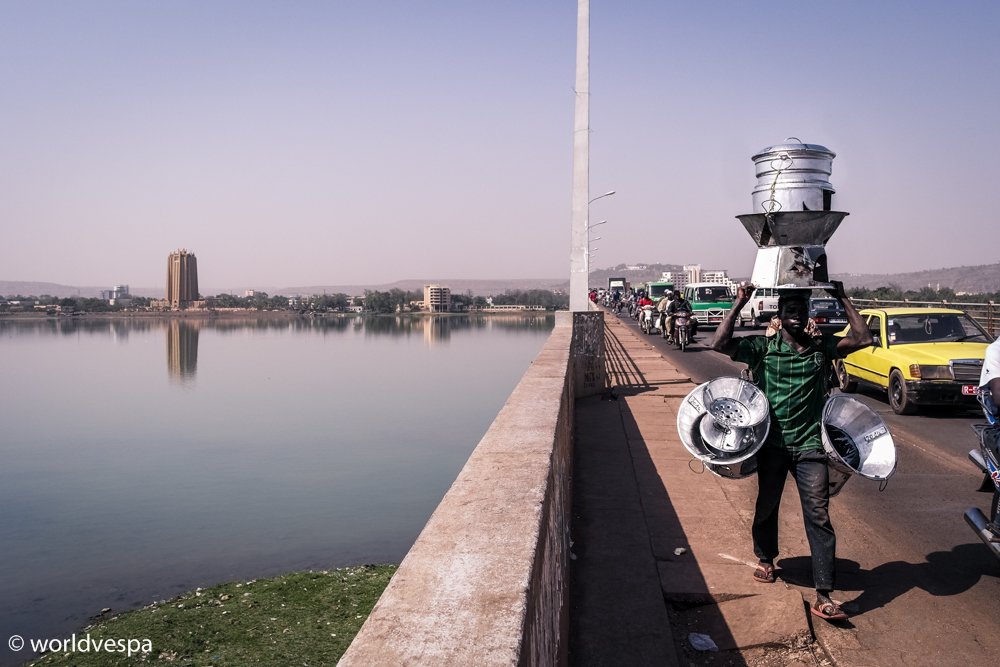 A view of Bamako from the old bridge.

Despite the tiredness and all the dirt I had on me the first days, I had made it! We both had made it! We had figured out ways to make our trip more comfortable. For example, we took with us as much water as we could carry (I carried 13lts of water on my vespa), and after leaving it in the sun for some hours, we had hot water to take a bath…It was just a bath but it was so relieving after a long, difficult day on the road. We could also wash our clothes and cook our meals.

When it comes to people, I don’t want to repeat myself: our entrance to Mali (border-crossing is a procedure that no one considers as easy) was fast and without any problems. We spent less than an hour from the one passport control to the other and I paid nothing at all for my vespa because I had the “carnet de passage”. However, Liam had to pay 15 euros for a temporary permit for his motorcycle even if this time we decided that he should go first, so that the officers could let him pass before seeing that only I had a “carnet de passage”.

After Liam came back holding a proof of payment, I took my “carnet de passage” and entered the office (it was more of a wooden hut!). The officer asked me what was the thing (the carnet de passage) I was holding and before I started to try to explain him, he showed me that Mali wasn’t anywhere on the list of countries written on its last page. I was ready to pay the amount he asked me but then I realized that his question was not to pay, but if I agree to pay. I gave him a very serious look and in a way that showed that I know exactly what I’m saying, I started with my story: that I had asked at the embassy and I had been officially reassured that the “carnet de passage” is for every country in Africa regardless what is written on it. 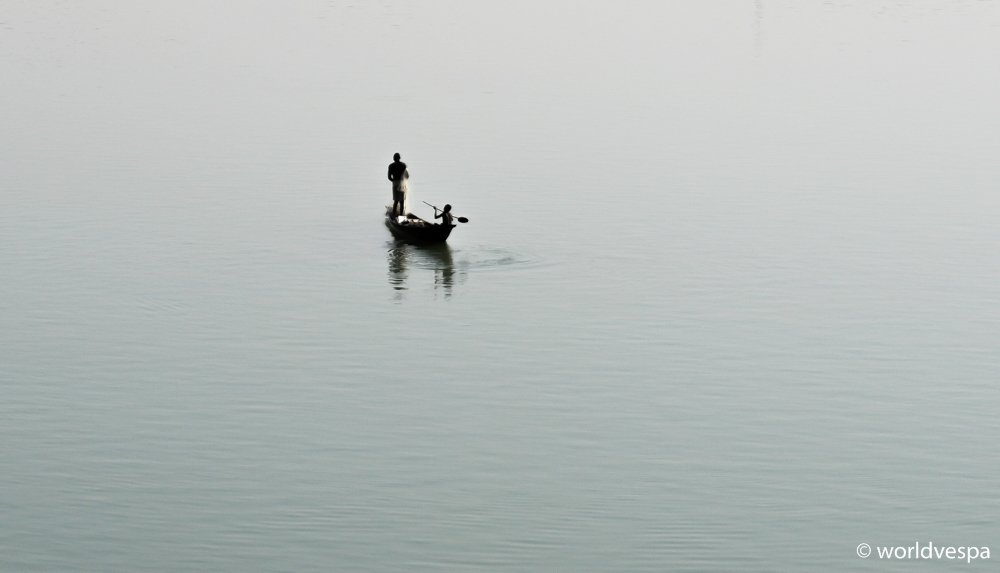 Fishing at the Niger River. In Bamako, we didn’t use our stoves. The choices for a meal were endless. The sandwich in this photo has: minced meat, french-fries, fried bananas(!), tomato, cucumber, onions, sweet and hot tomato sauce, salt, oil and some spices and it costs 0.75 euros! It’s difficult not to gain some weight! 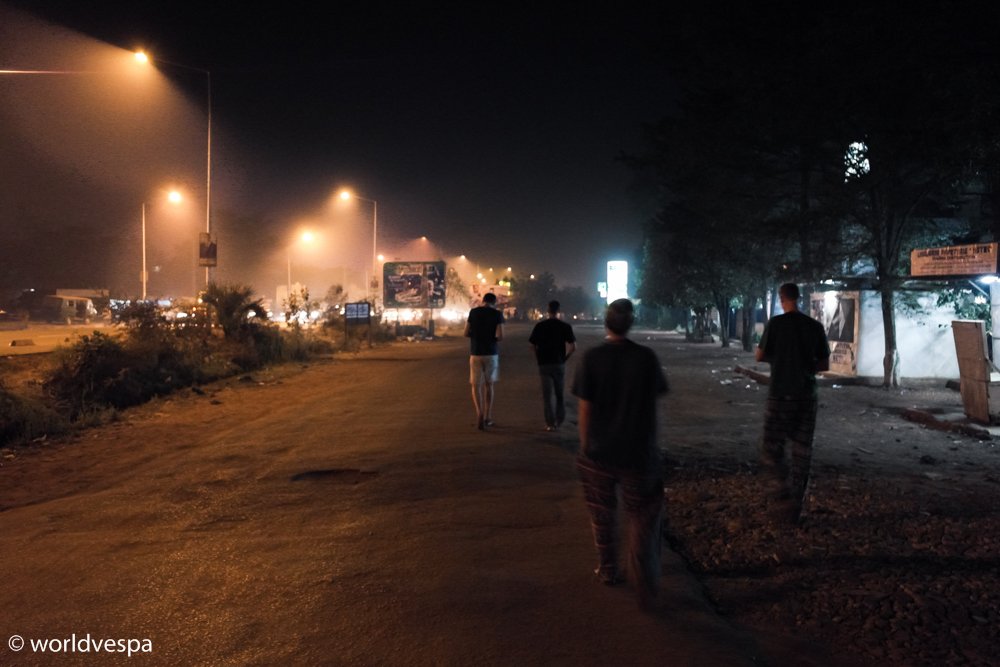 Just having a night walk... 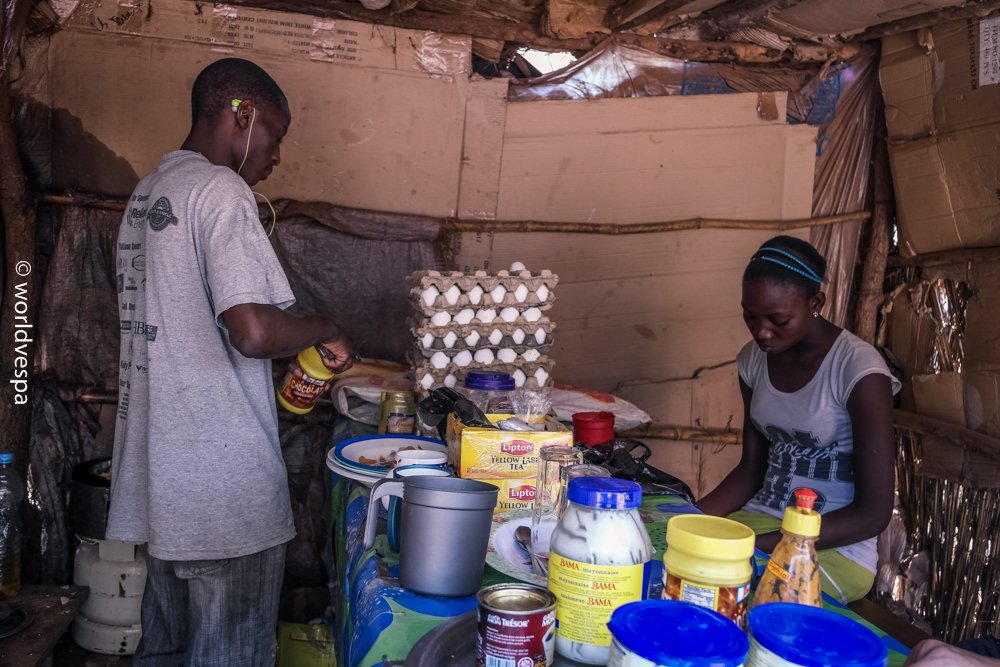 Street food next to the embassy of Ghana. 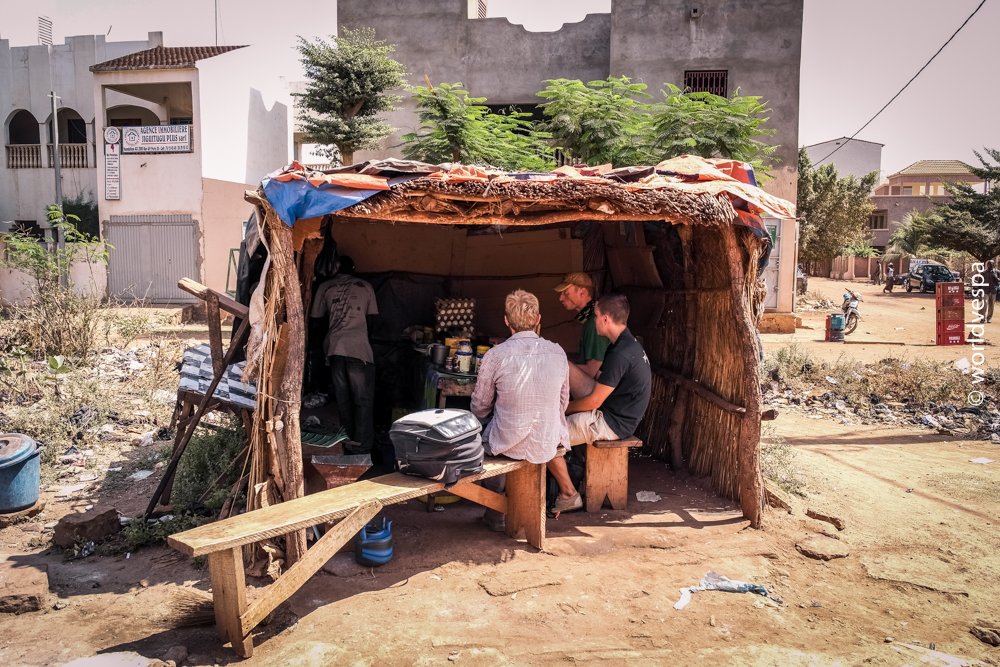 Street food next to the embassy of Ghana.

And as I was ready to confront him with more arguments, he just asked me where should he put the stamp! So, this is how we entered Mali. From the south of the country we took the small, quiet road from Kanieba and Kita, following the wise advice from a French guy who was traveling on a bicycle – Took this road and not the central one from Kayes to avoid the obligatory military escort and its huge cost (around 70 euros).

Bamako is something else! It’s not a very large city, with a population of about 2,000,000 people and a really chaotic way of life! Every single moment of the day the only thing you hear is the sound of car horns. The traffic problem is an everyday routine and even trying to walk on the streets is difficult. No-one respects the circulation rules, they are just trying to survive among a chaos between cars, motorcycles, dust and car fumes. The best choice in order to see the city is to take a taxi and if you want some kind of adventure, you hop-on in one of the green mini-buses with a man hanging out of every each of them yelling their destination (in a mini-bus like that, even if there is space for 9-10 people, they manage to put 20 passengers!).

The cost is less then 0.3 euros and you have the experience of seeing the city without worrying about your vehicle! (of course, we Greeks are a bit used in chaotic circulation, but for the rest of the Europeans, it would be such an experience!). Food is also very cheap here in Bamako. We could find a decent meal and very big portions at a cost of less than 1 euro. If you get hungry again, you can grab a delicious sandwich with fried banana from the street market and eat it while sitting on a bench. 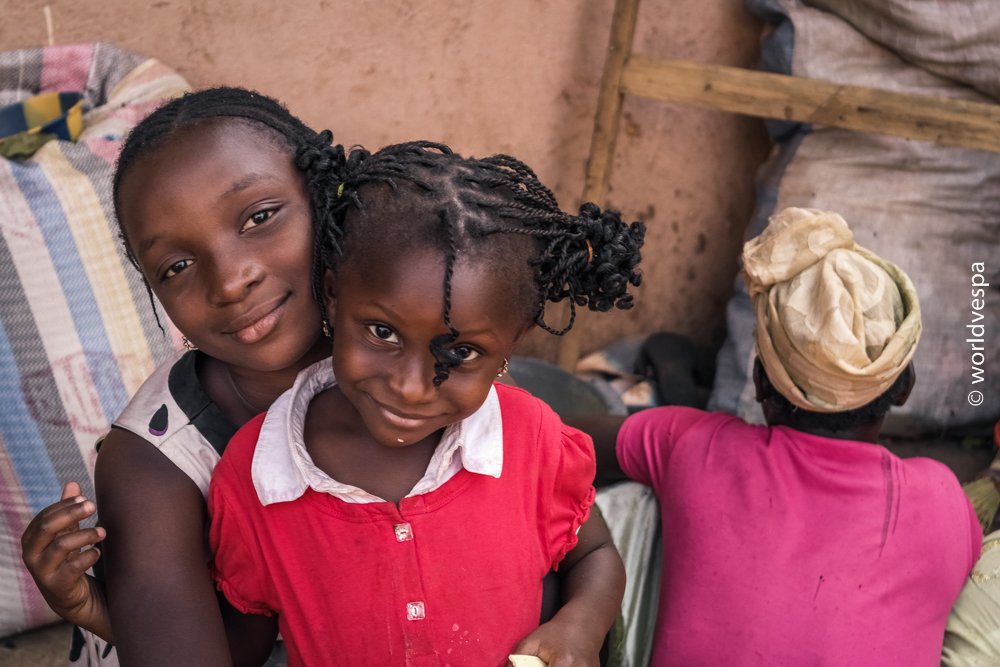 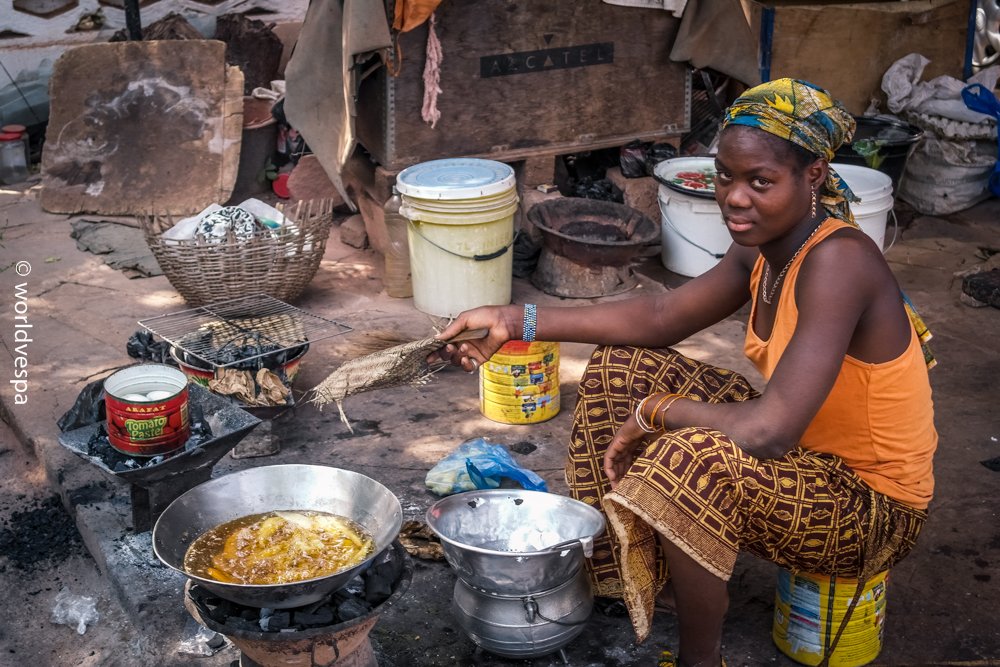 Nothing tastes better than street food! 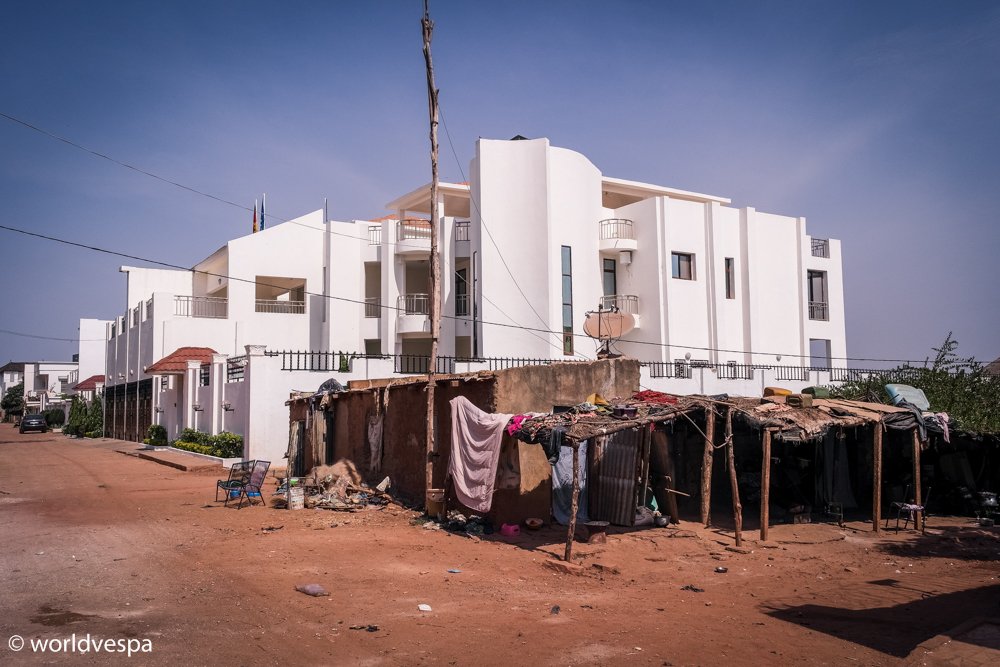 Poor neighborhoods in Bamako right next to really expensive houses, behind tall fences. 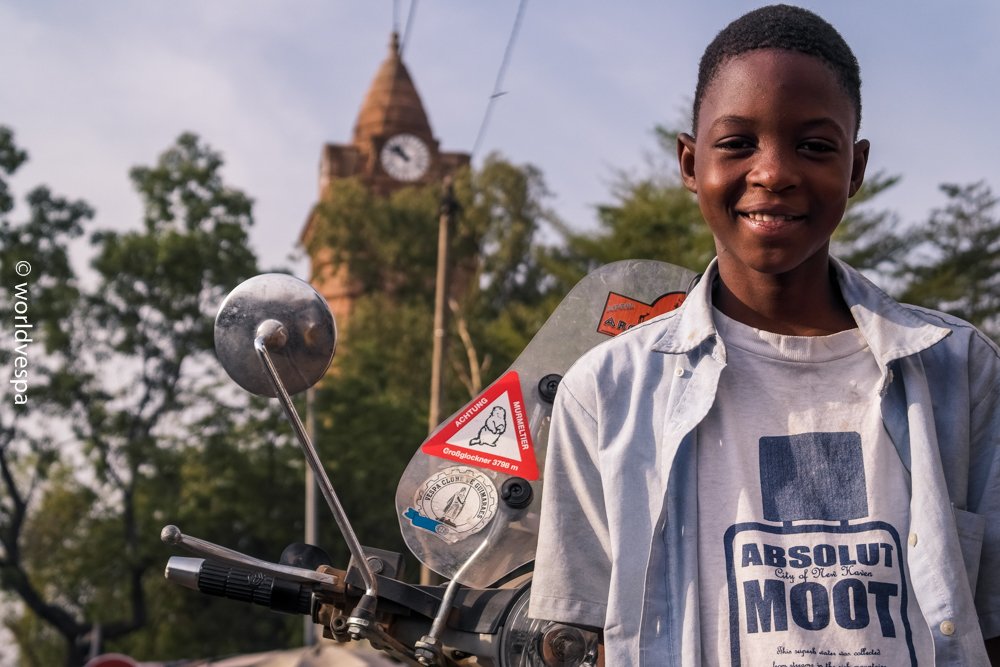 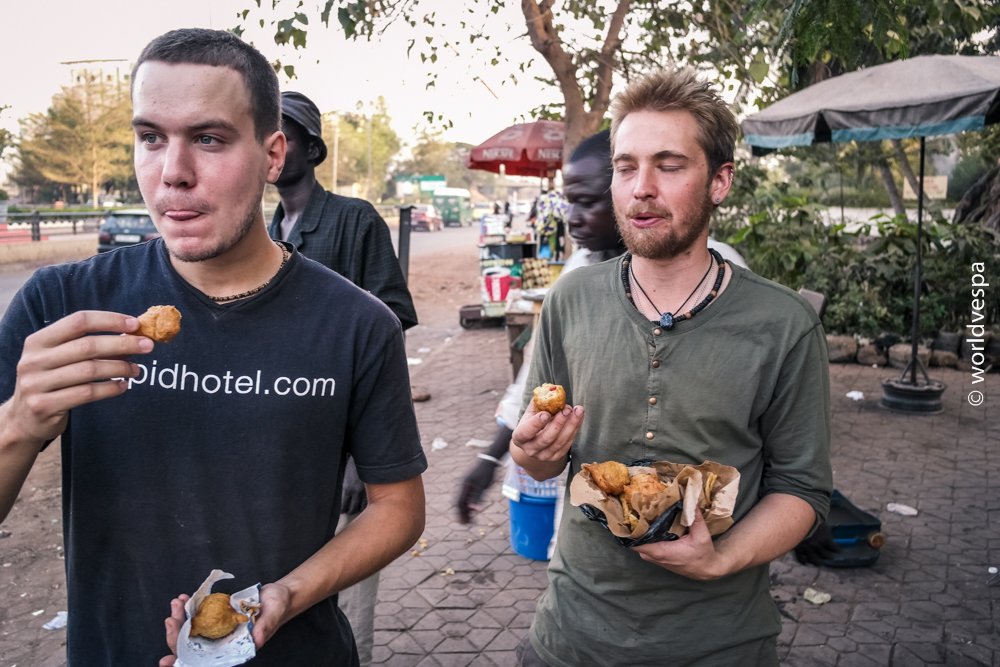 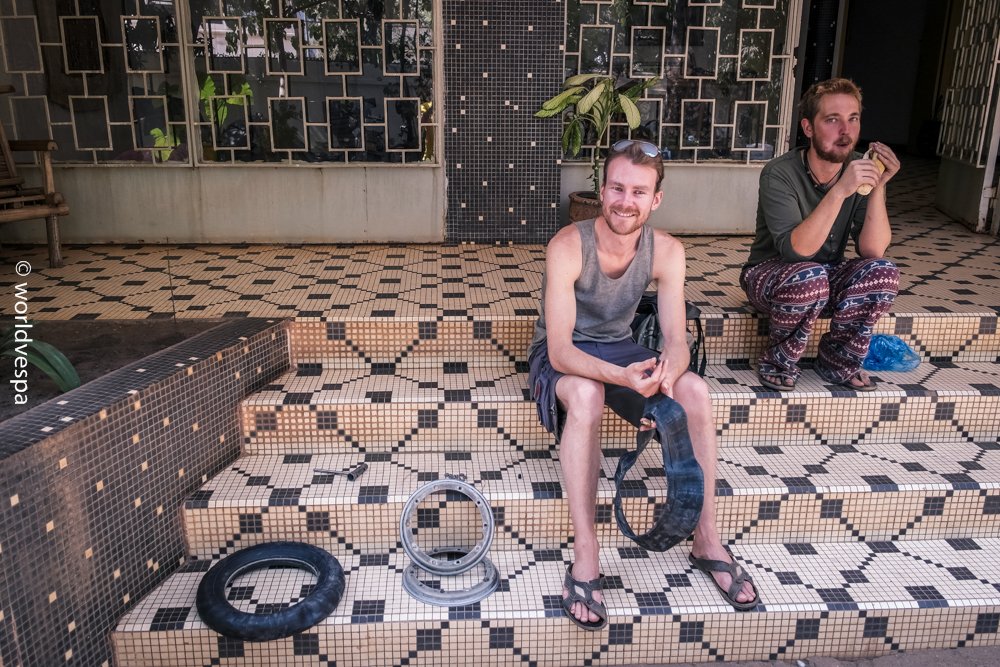 Changing tires in a Vespa is really easy!