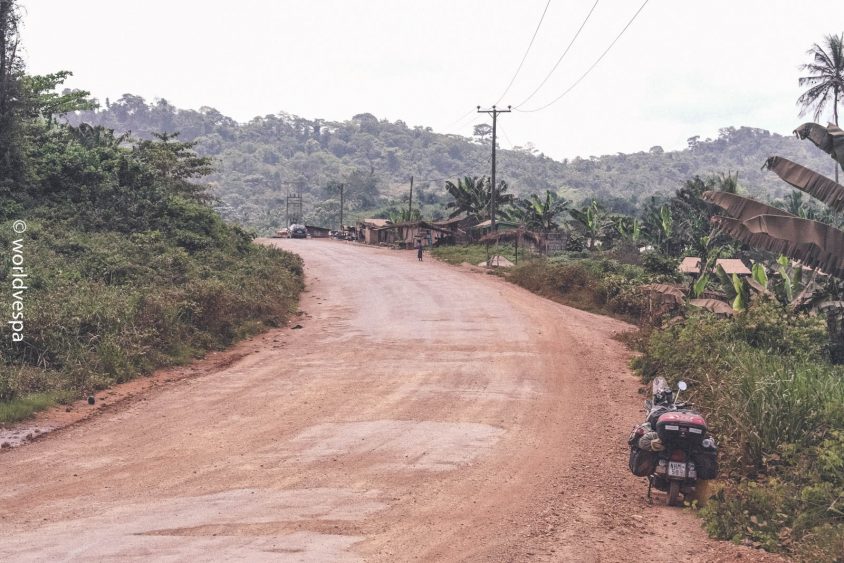 Ghana was not in our plans because we had heard many negative things about the visas and about crossing its borders, from other “travelers”. Most of them had concluded that it is impossible to enter the country unless you already have bought a visa from your country of origin and that it is also completely impossible to buy a visa from any other country. Not true at all! We bought our visas to Ghana from Mali with no problems (the only thing we had to do was to write a letter explaining why we want to go to Ghana!).

As for the border crossing, Liam had been a bit “brain-washed” by other overlanders in Burkina Faso, for his not having a “carnet de passage” and that he wouldn’t manage to enter Ghana. Luckily for me, ΕΛΠΑ (the Greek Foundation for Car&Travel) had provided me with the “Carnet de Passage en Douane” and I didn’t have any concerns. However, all the things Liam had been told and due to the differences between our cultures – he was a bit more anxious than me about laws, documents etc – he had lost his sleep trying to find out what he would do. He had been reading every information he could find on the internet and he was trying to prepare himself for any kind of problems he thought he would face at the borders. 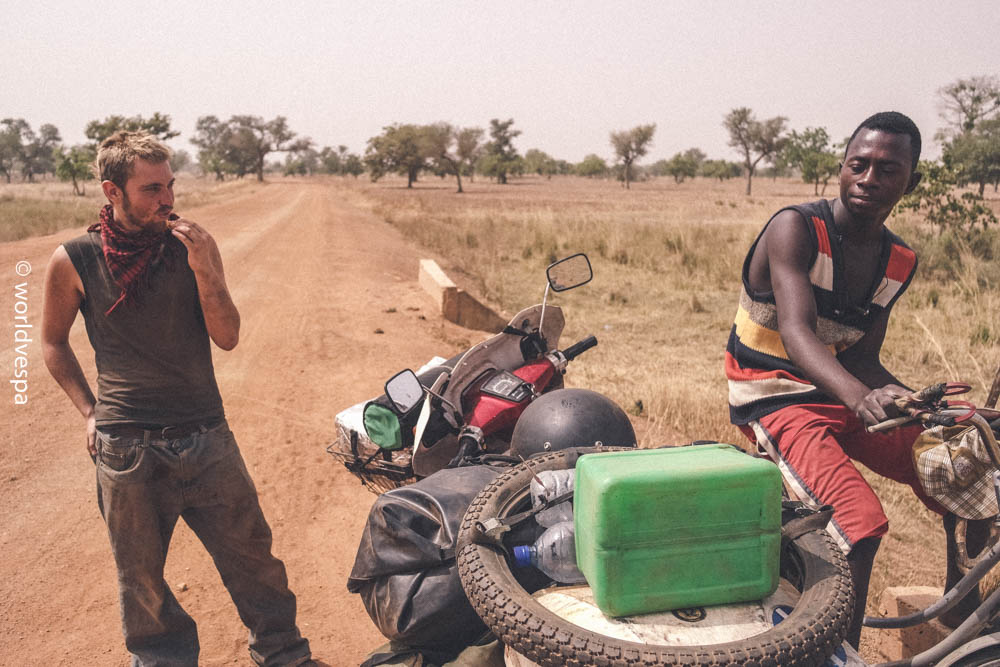 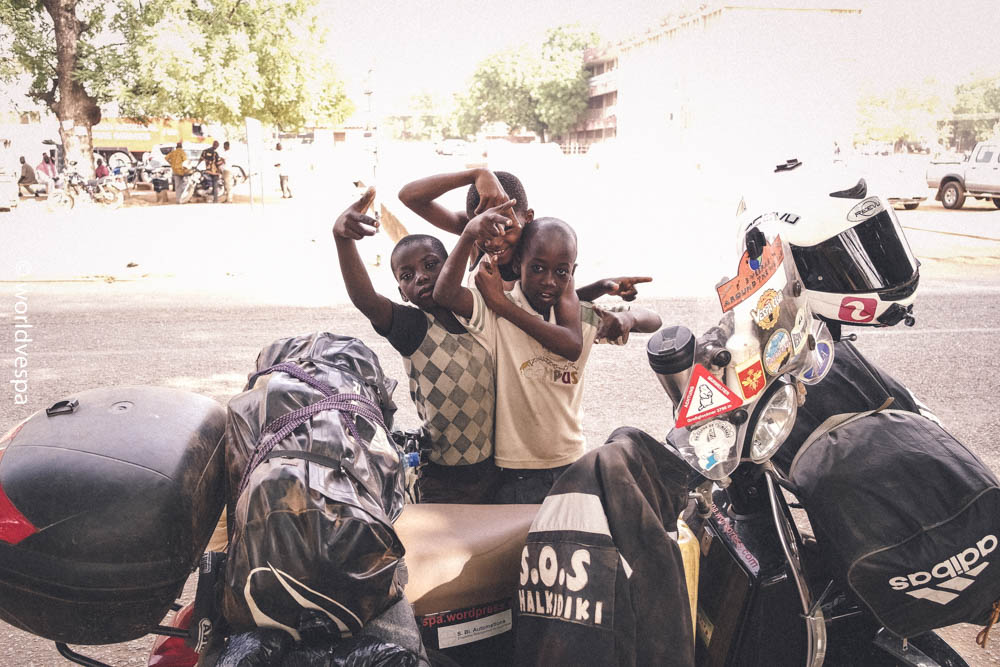 These kids know how to pose! 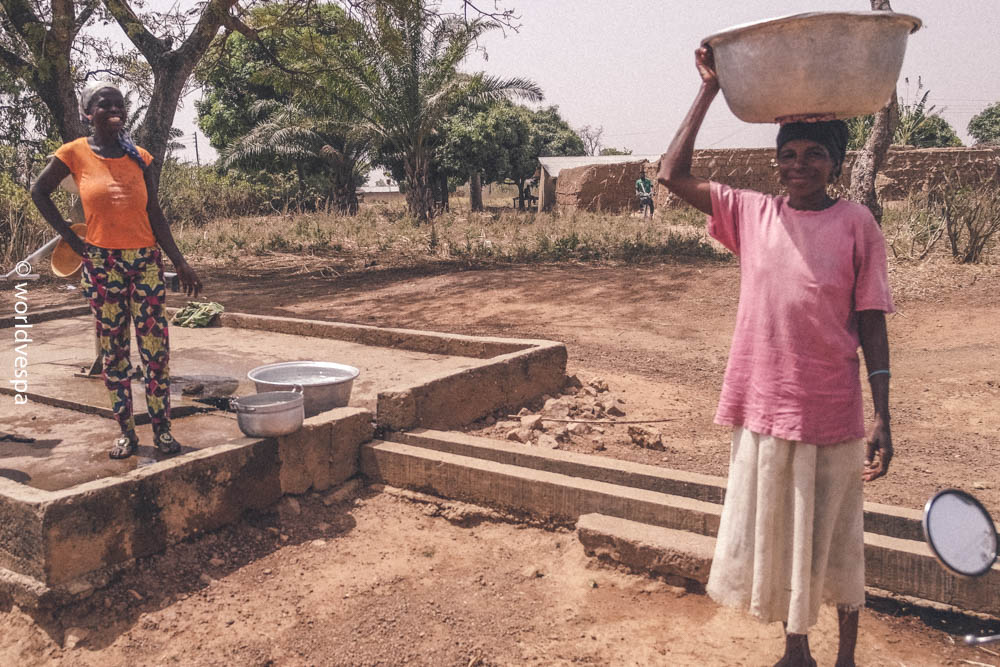 Quick stop for water from the well

AFRICA: THE COST OF THE TRIPSHIPPING THE VESPA FROM AFRICA TO AMERICAAFRICA: BEST & WORST

We left Ouagadougou and directed to the town Leo, where we turned right to the small town Hamale which is near the border. Liam thought that it would be easier for him to cross the border from this town as he didn’t have the “carnet de passage”. Some kilometers after Leo and just before sunset, I saw the figure of a motorcycle coming from the distance. It was too big to be a local’s motorcycle. Then I realized that it was Elias and Christina the “madnomad” team! A couple from Greece riding 2 Honda XR250 with the plan to travel through Africa and continue to Middle East in (?) days! We had talked on the phone and we had tried to meet but we hadn’t found the chance until now! Pure luck! For the next 2 days, the only thing we did was sharing our stories as well as the delicious meals prepared by Christina!

The day we were ready to continue our trip and while I had put all my stuff on the vespa, I noticed that the front suspension was not working properly. It was totally flat. That was the first problem I had after four months of traveling and apparently I was not ready at all for something like that (even if I said that I was dying for some adventure!). The only thing I could do at the moment was to put all the weight at the rear seat of the vespa and drive carefully. After that, the problem was not so bad anymore but I had to pay attention on the potholes! 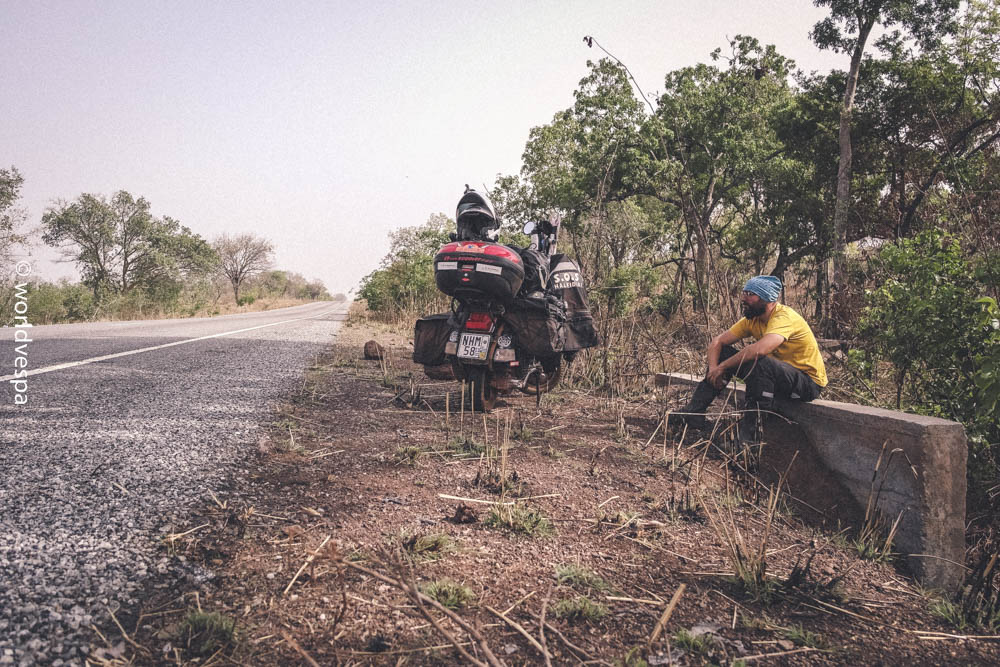 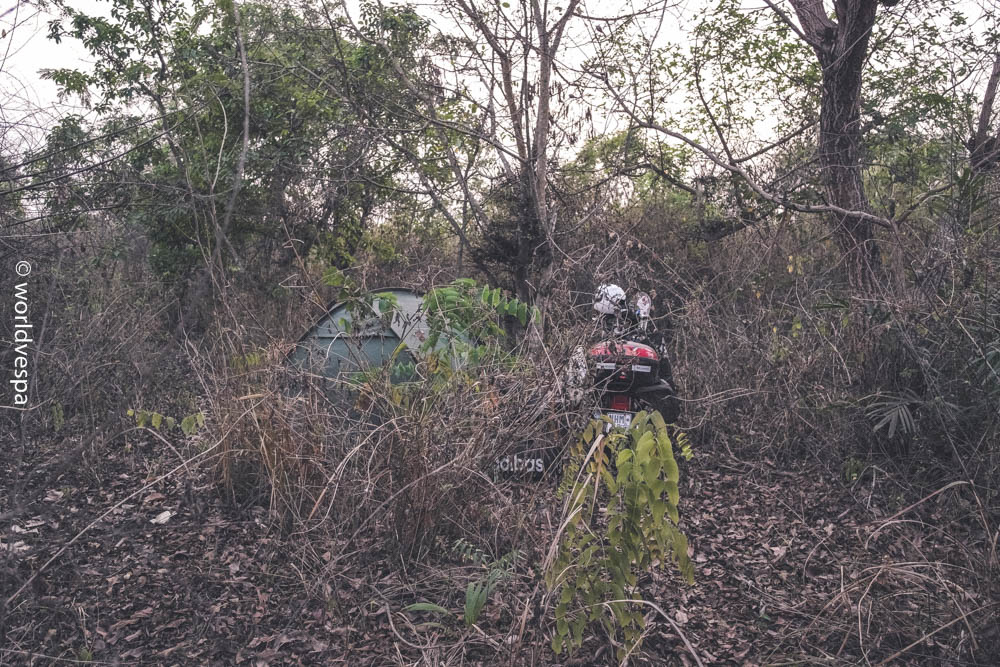 Am I well-hidden? (wild camping) 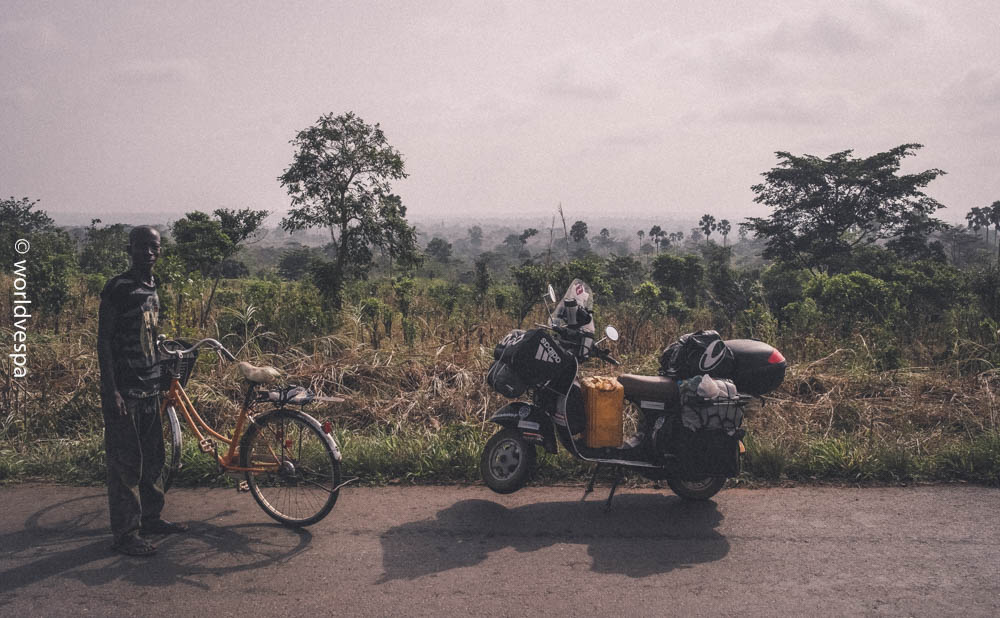 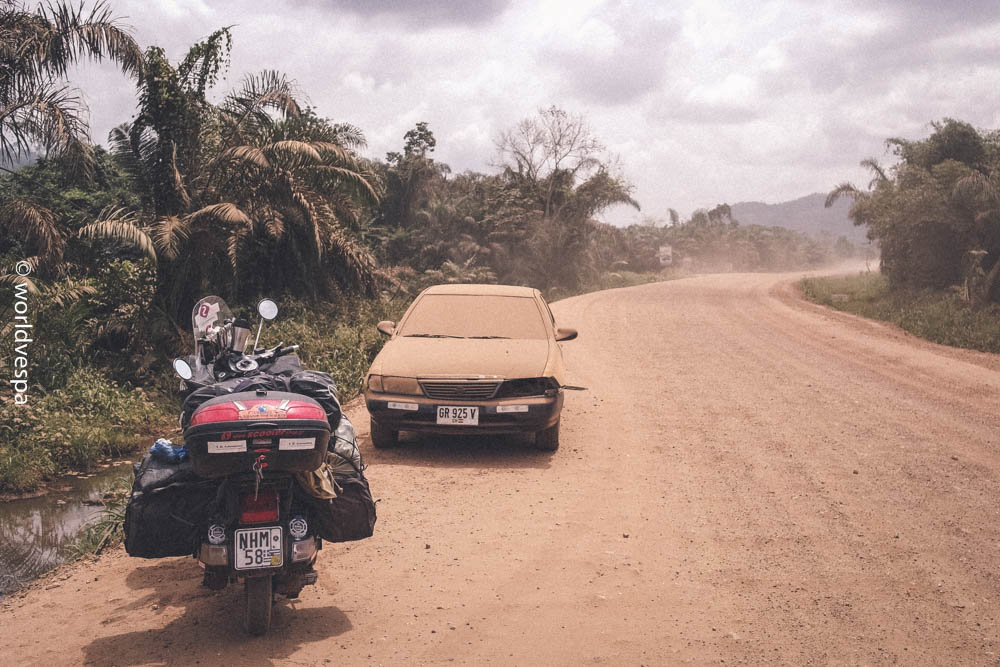 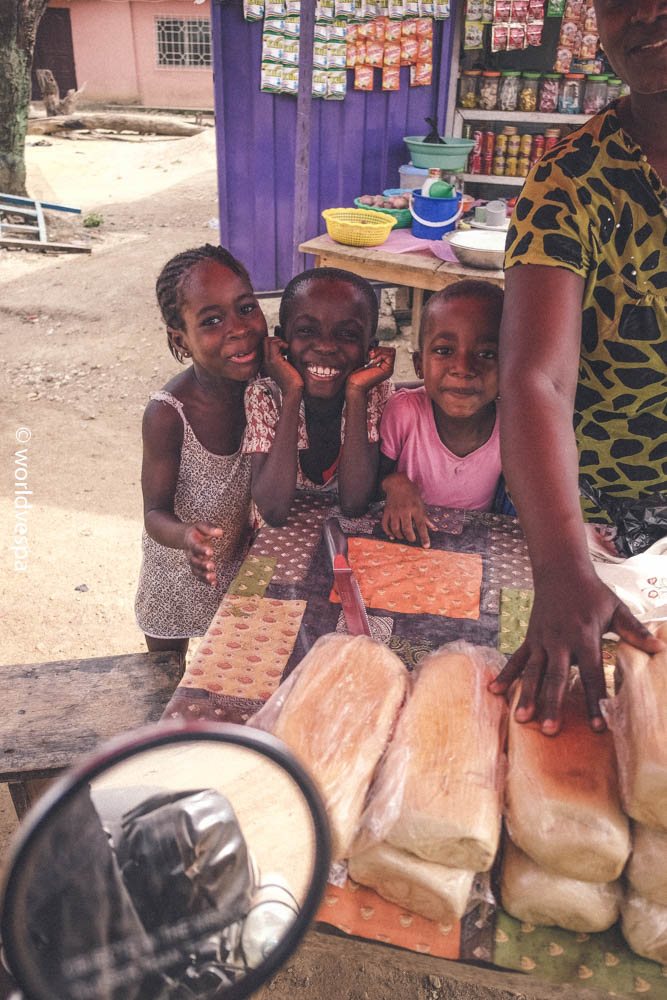 Look at these loaves of bread and those smiley faces

The passage through Hamale was really quiet, there was almost no one there. We also couldn’t see any gas station so it was the first time we bought petrol in a bottle! As for the procedures at the borders, the only thing I have to mention is that I went back for 10 kilometers to find the last village in Burkina Faso and put a stamp on my carnet de passage. And that, because we hadn’t noticed that the customs office was there. The stamps on our passports, on my carnet de passage, on Liam’s pass avant and the check on our yellow fever cards (for the first time!), took us approximately 40 minutes and then we were in Ghana!

We were so happy that everything had gone well, contrary to what we had heard, but things changed suddenly…and that because of the conditions of the streets. For more than 500 kilometers we were on not well maintained dirt roads with no other choice. The worst part was that those streets were the main ones so there was too much traffic that caused too much dust and our lives had become difficult!

Not far from the town Wa, I lost Liam!

Not due to the dust, but for once more due to a technical problem. We had started again our trip after a stop for lunch and as we were now on tar road for the first time after some days, I accelerated a bit. Apparently, Liam didn’t, and that happened because he could hear a strange noise coming from his motorcycle. I stopped and waited for him for hours but he stopped and waited for a new engine! 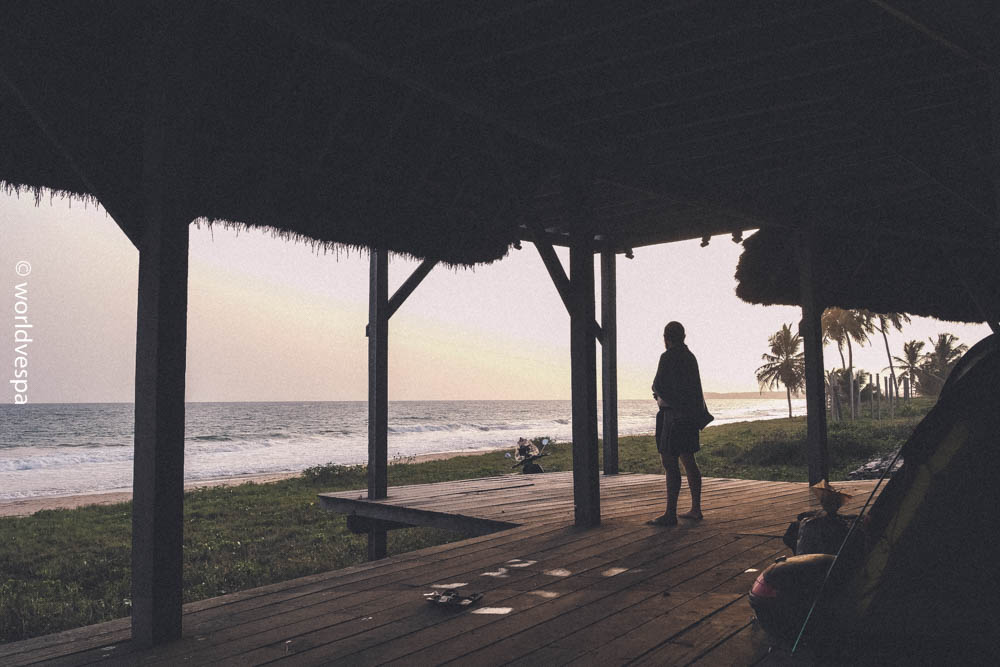 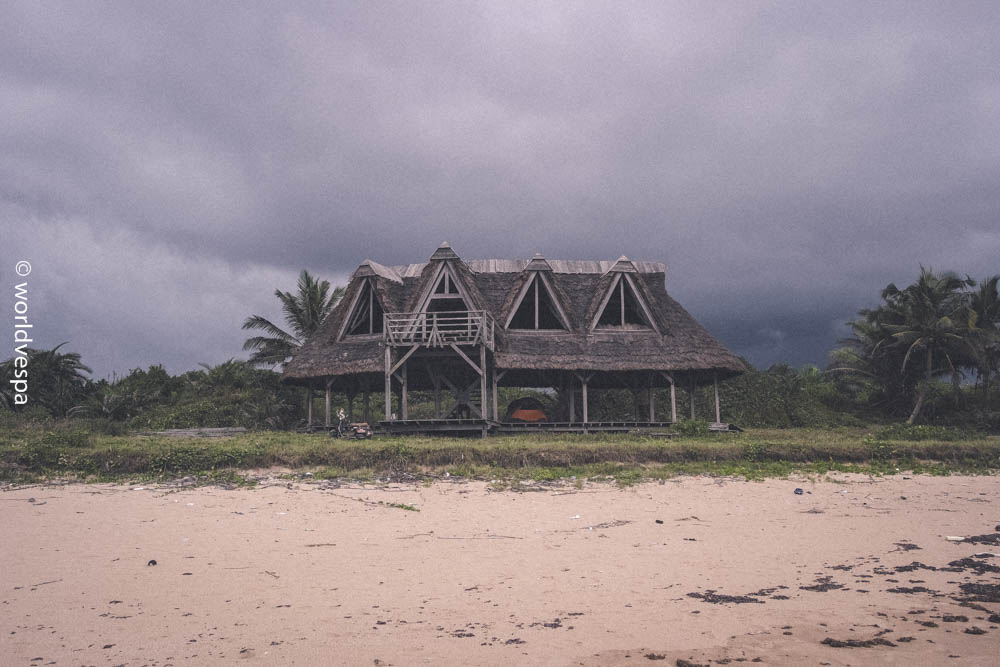 I spent 2 nights alone in this abandoned house... 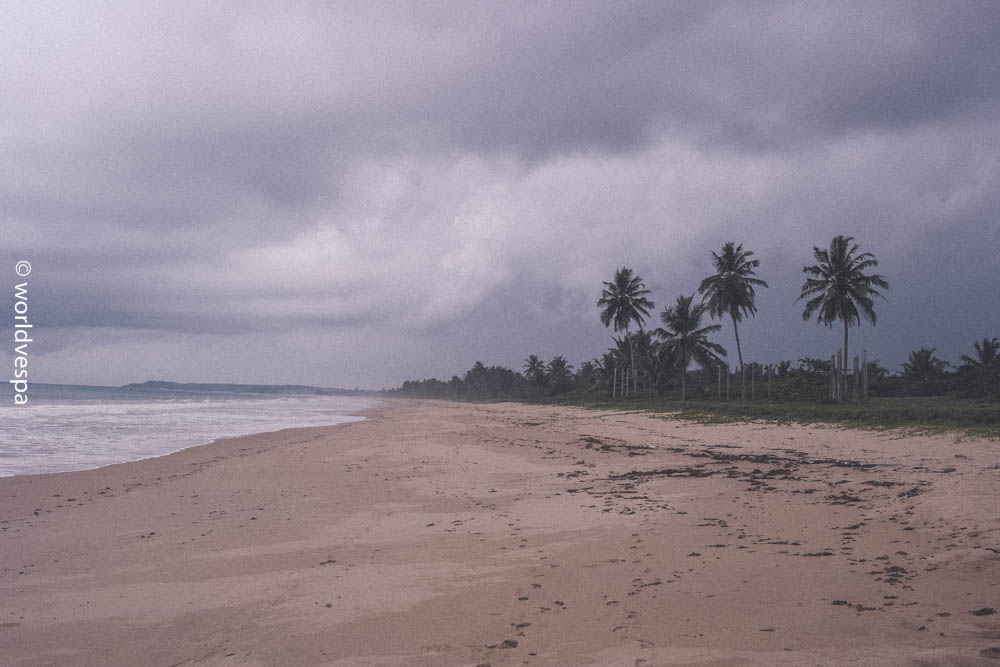 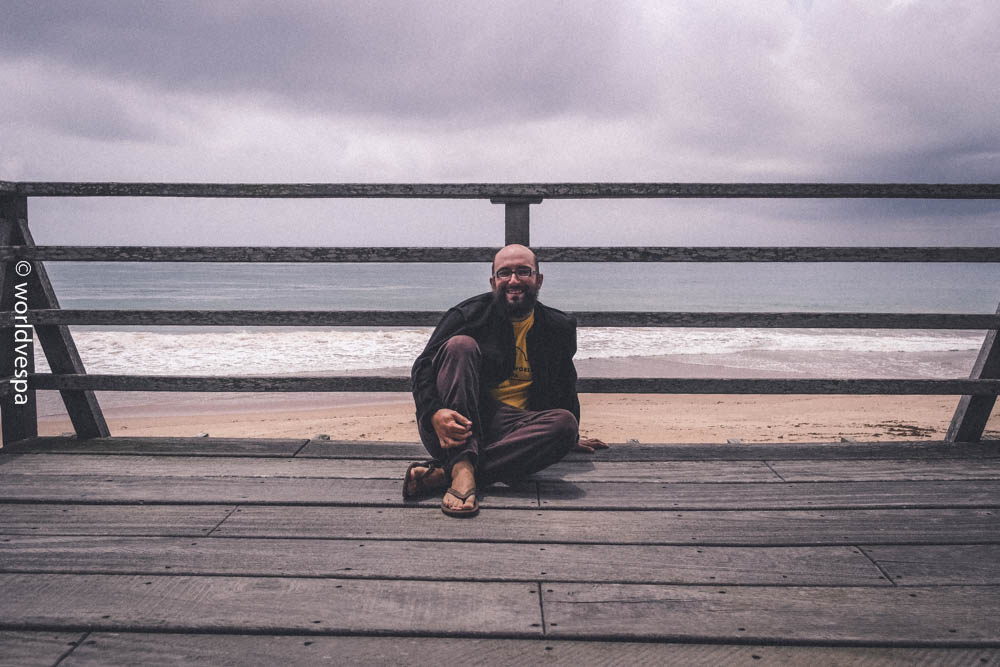 ...and I had plenty of time for some pictures 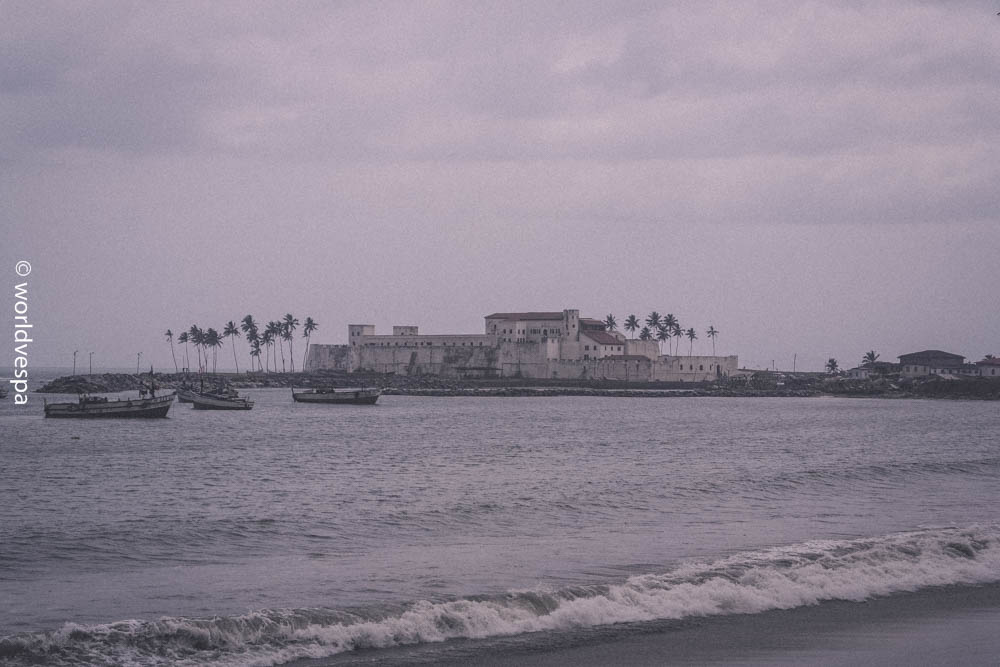 Elmina Castle, the place where 30,000 people per year were sold as slaves to the Old and the New World 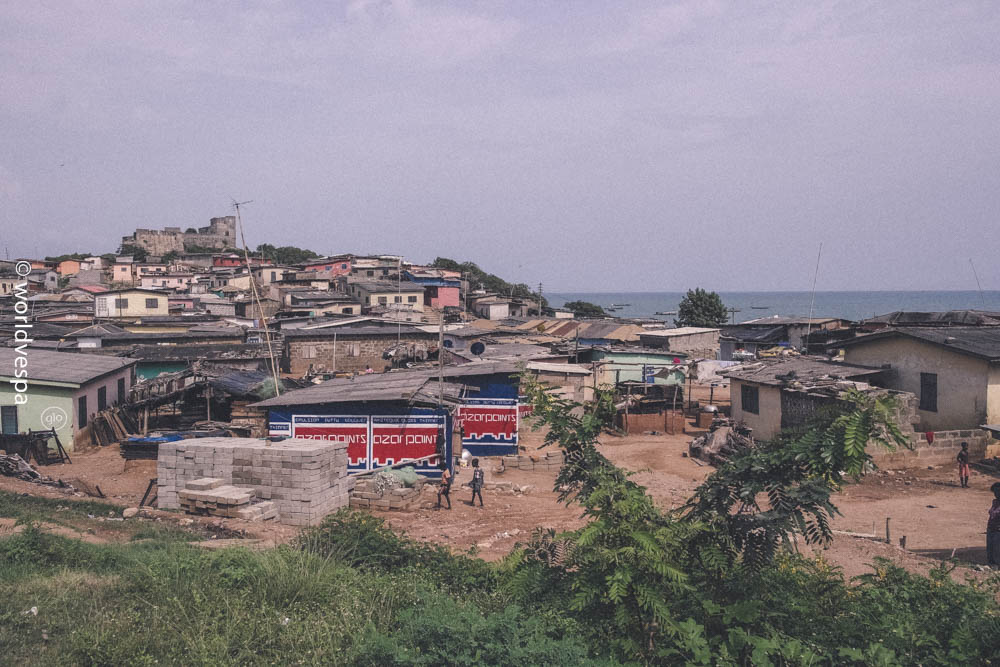 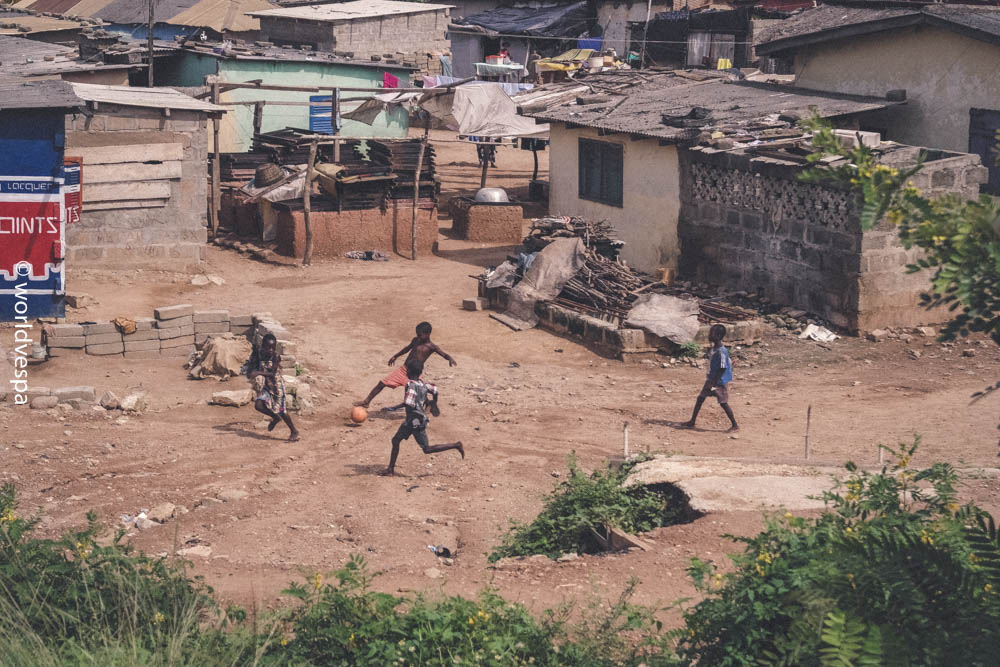 It was the first time I had to travel alone after 4 months traveling with company. At first I had mixed feelings about, it but as the days passed and I started talking to myself(!) it was clear that traveling alone was not the best thing for me. Of course we had talked with Liam on the phone and we had arranged our next meeting. It would be in Accra. He needed some more time to find out what he would do with the engine. He was thinking to put a brand new Chinese one and get rid of the Japanese nightmare!

After a 3 days’ rest at Kumasi (Guestline Hostel – 4.5 euros per night), where I slept in a proper bed for the first time after 2.5 months (the last time was in Nouakchott, Mauritania), I headed south to find Elias’ and Christina’s “holiday house” (Elias had sent me the exact location on the GPS) and water their garden! The “holiday house” was an abandoned house on the beach. A beautiful exotic beach like those we see on the movies. They had found that nice spot as they were riding their motorcycles…off-raad (and they had forgotten to mention it!). My little vespa with all the luggage and the broken suspension finally did it! I found the house and stayed there for 2 days all alone talking to the walls and the sea…

“It’s good to have some good company”, I repeated to myself…

I was a few kilometers away from Accra (about 300kms)- but Before Accra, there was the town Elmina with a long history and a castle on the beach. This castle was the prison for thousands of Africans who were sold and sent as slaves to the United States and to Europe. My plan was to stop there and see the town and the monuments but the heavy rain made me change my mind, take some quick pictures in the town and drive as fast as I could to go to Accra (for about 150kms and raining!).

I managed to get to the hotel I had found on the GPS in the city center of Accra at around 20:00. The traffic was too heavy and the “tro-tro” (the mini buses) were only making it worse. I spent 1.5 hour for the last 25 kilometers! The first hotel I found was too expensive (43 euros), the price at the second one was lower but still not for me (31.5 euros), so when I found “Pink Hostel” I was very happy. A brand new hostel, very clean which only cost 19 Cedi (5.5 euros). I would share the dorm with 2 Indians, 1 Ghanaian, 1 Swedish and 1 American. However, the 3rd day when it was time to pay, all of a sudden I realized that the currency was wrong: nobody had mentioned that it was not 19 Cedi, but 19 USD! So I abandoned the place running…

While I’m writing this text, I’m at a couchsurfer’s house who is been hosting me for 10 days now. I’m staying here with Steven, the German guy I had met in Bamako. On Tuesday morning we are leaving for Togo and now the plan is to travel all together: Liam, Steven and I, so that we will help each other cross the “difficult” – as we’ve heard – countries that follow (Nigeria, Congo, D.R.C.). 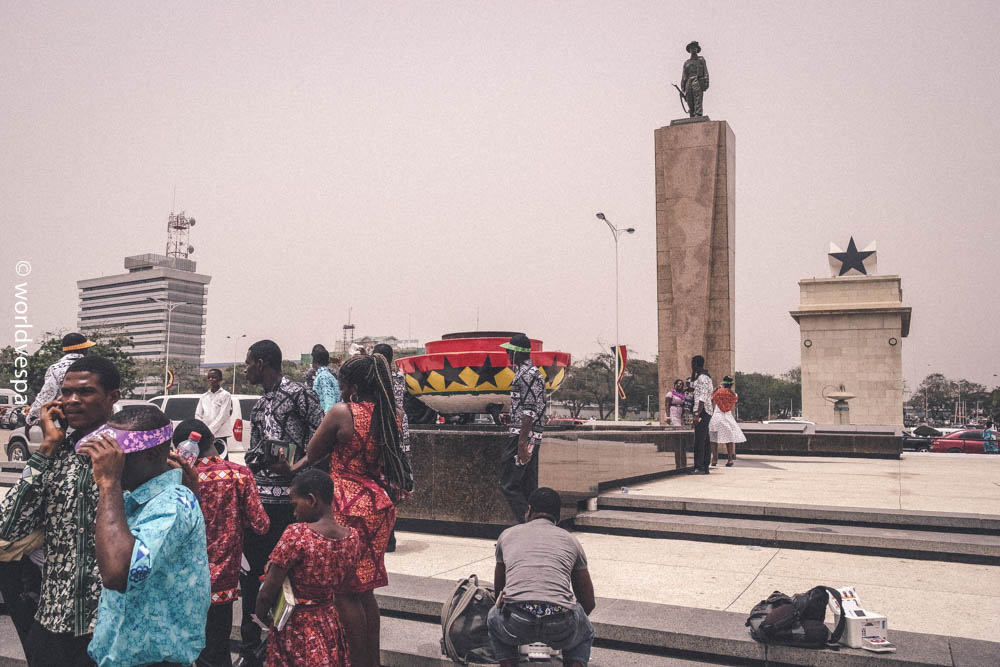 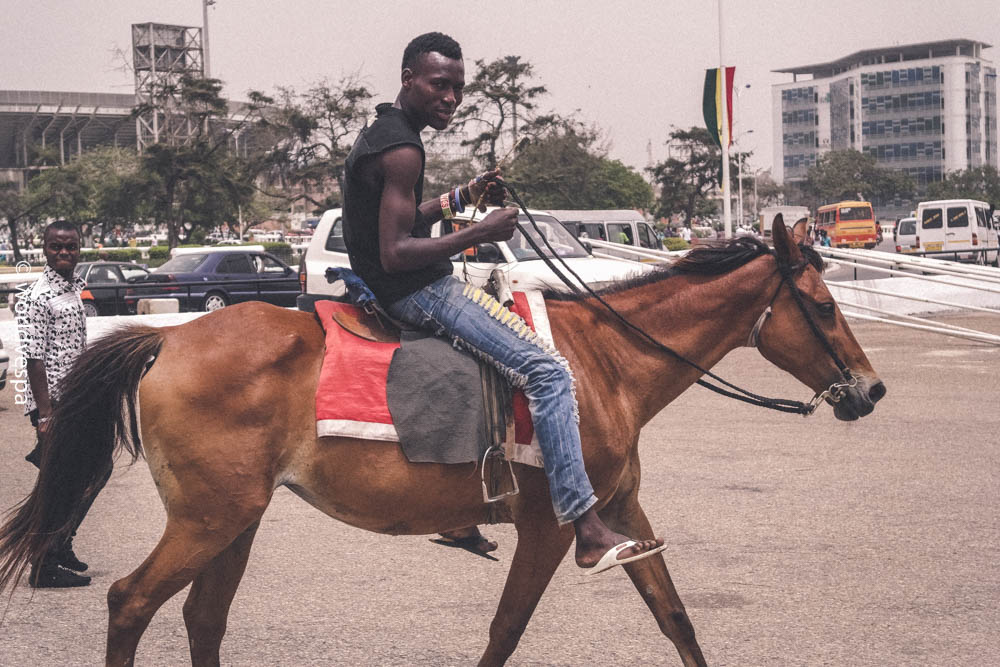 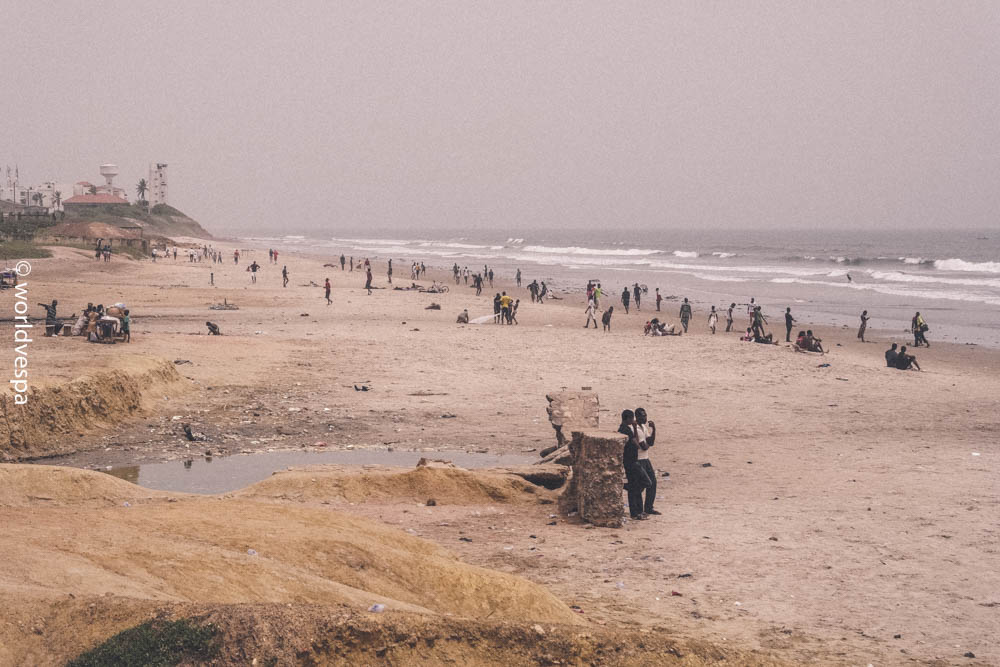 Everyone goes for a stroll to the beach 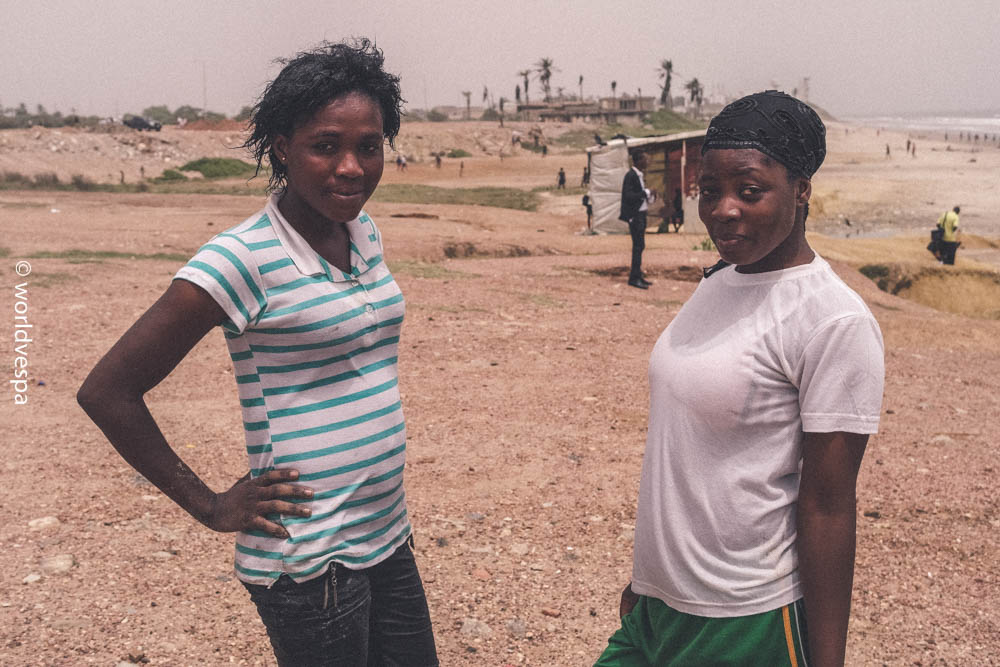 I met these two girls on the beach. They both wanted to marry me! 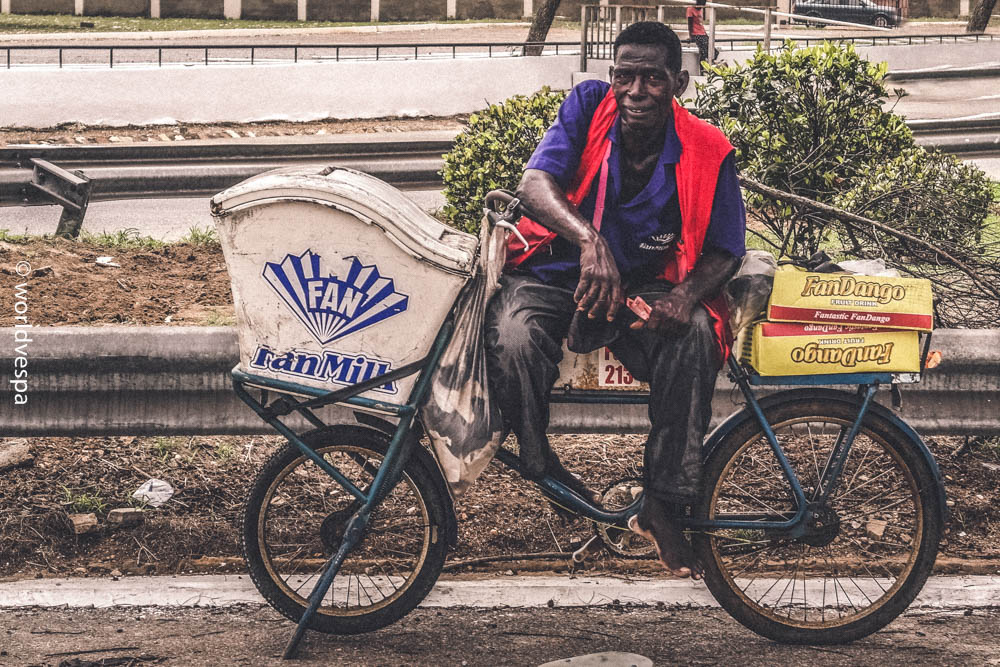 Every time I saw a “fan milk” ice cream man, I couldn't resist 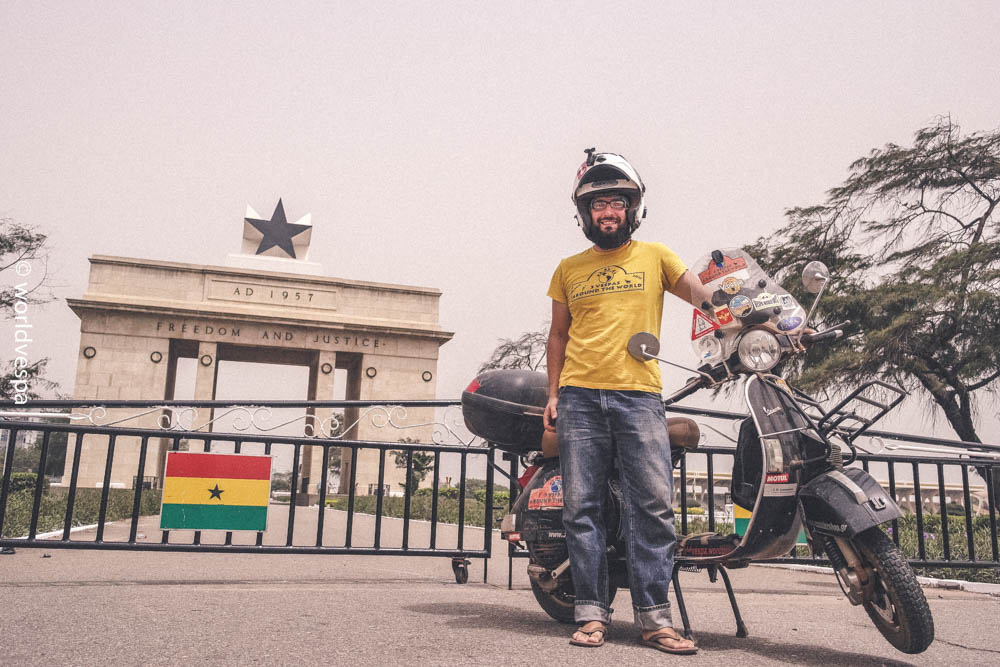 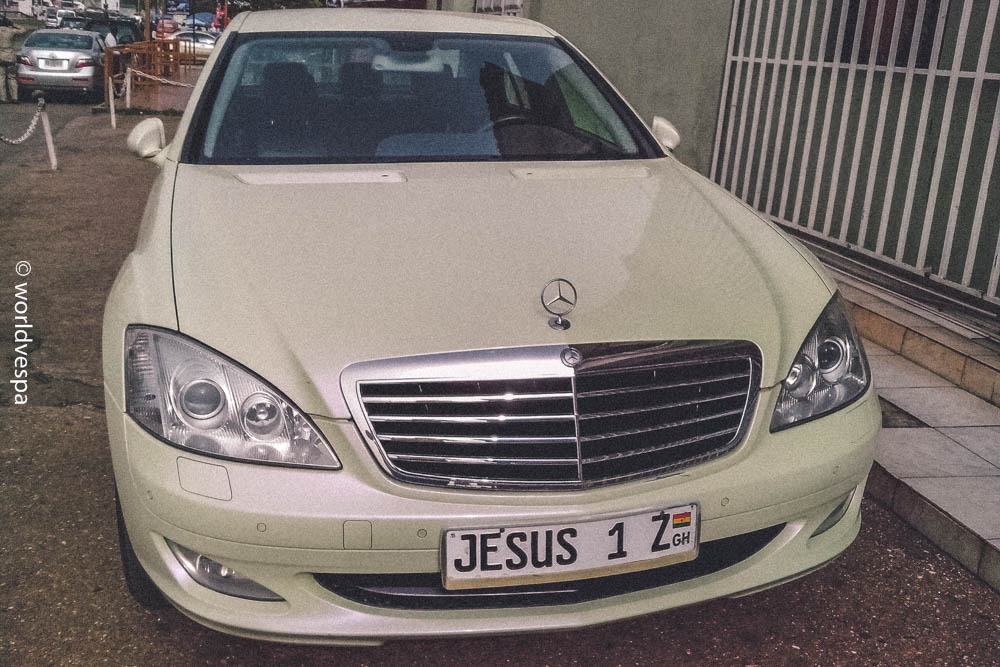 Whose car is this? Oh, Jesus'!