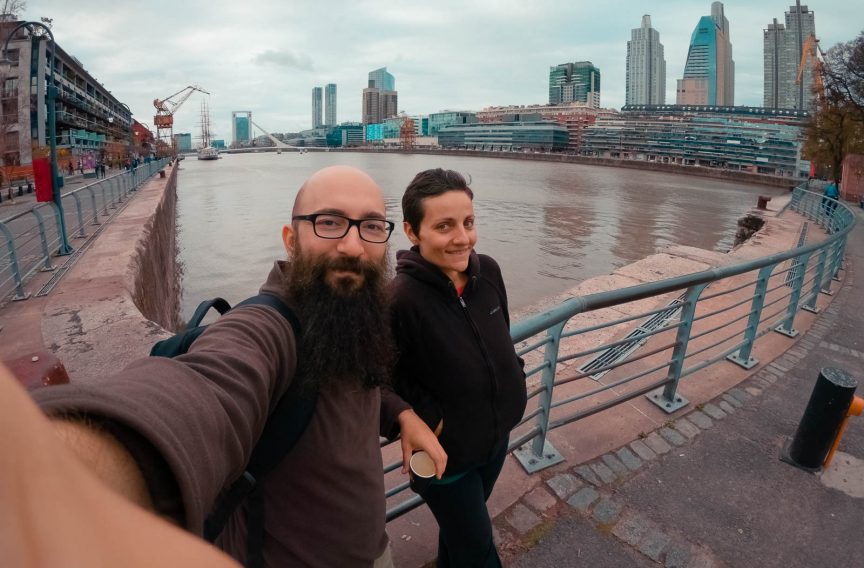 Buenos Aires is definitely our favorite city! It's a city that has everything we want. And during our second visit there, we had enough time to discover more of its amazing life!

We said goodbye to Uruguay with mixed feelings and crossed the border to Argentina. From there, we went directly to a familiar place: it was the campsite of Gualeguaychú (or better, one of the campsites) where we had stayed exactly 4 years ago. It was back in 2015 when we spent the first night of the previous leg of our trip in that campsite, leaving from Buenos Aires headed north towards Iguazú. The place was exactly as we had left it. After two quiet days, we rode the approximately 300kms to Buenos Aires and we were finally there! The city we loved was waiting for us to discover it again.

Buenos Aires is our favorite city! Many people who visit it say that it's “too European” and that it lacks the “exotic” Latin American atmosphere they were looking for. Well, I have to disagree with them for many reasons. Mainly because I believe that whoever says this, hasn't scratched beneath the surface to discover the heart of this unique city. Sure, Buenos Aires' architecture is characterized by its eclectic nature, with elements resembling Paris and Madrid and this is the interesting result of the European immigration. Above all, Buenos Aires is a metropolis, a multicultural city that is home to multiple ethnic and religious groups. And this is because it has been a major recipient of millions of immigrants from all over the world. Buenos Aires is a melting pot, where several ethnic groups live together and what's more, it's being considered one of the most diverse cities of the Americas.

Oh, and for those who say that the Porteños – the people of Buenos Aires (derives from the word puerto, which means port) – are a bit cocky... Well, they live in one of the best cities in the world, give them a break!

If you're not convinced yet, maybe I need to add two or three more facts about this wonderful city:

There are many more interesting facts about life in Buenos Aires, but those were the first ones to grab our attention.

The first time in Buenos Aires (back in 2015) we stayed in San Telmo, but this time we found a place in one of the less touristic neighborhoods, Colegiales. We preferred to get to know other parts of this amazing city than staying somewhere we already knew. And guess what? It was a great idea! According to a 2009 study by the University of La Plata, Colegiales is the neighborhood with the best quality of life in the city of Buenos Aires. It has numerous restaurants and bars, it's safe, peaceful and there are numerous parks and plazas to fulfill the people's “outdoorsy” lifestyle). But, in our case, our extraordinary luck was to spend a whole month hosted by a wonderful person, Gabriela, with whom we had endless conversations about life in Buenos Aires, its history, its culture etc. Gabriela also took us to a peña – a gathering with folkloric music and dances from the inland as well as traditional recipes – where we even tried to dance the traditional chacarera and zamba. She also introduced us to Río Abierto, an expressive movement / dance therapy (check out rioabierto.org.ar) invented in Argentina years ago. Nope, tango is not the only Argentinian dance... 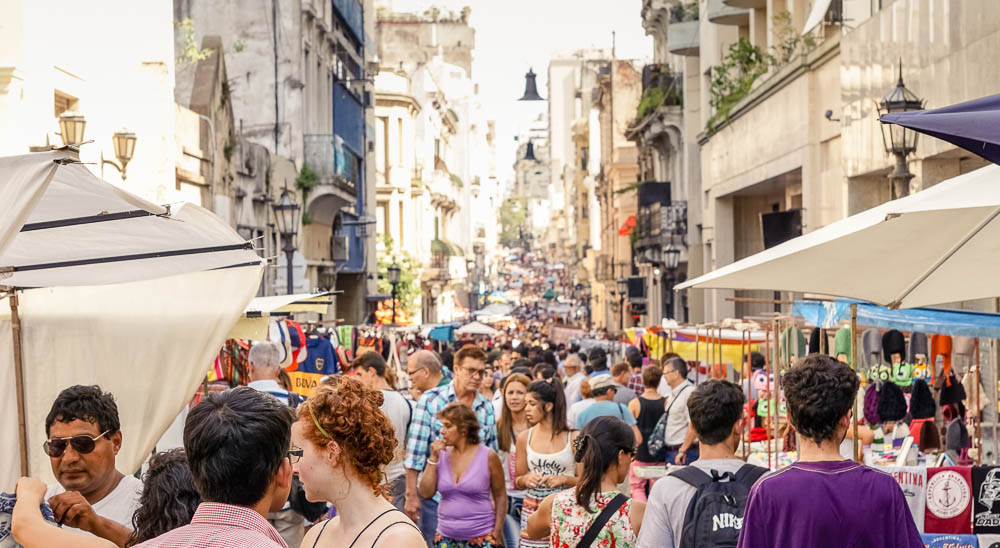 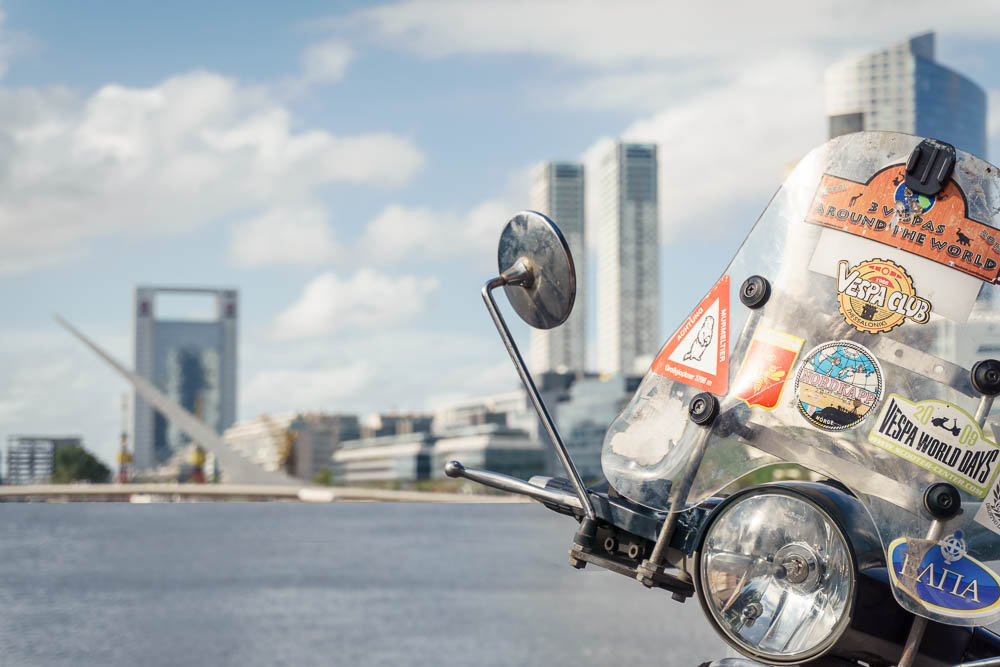 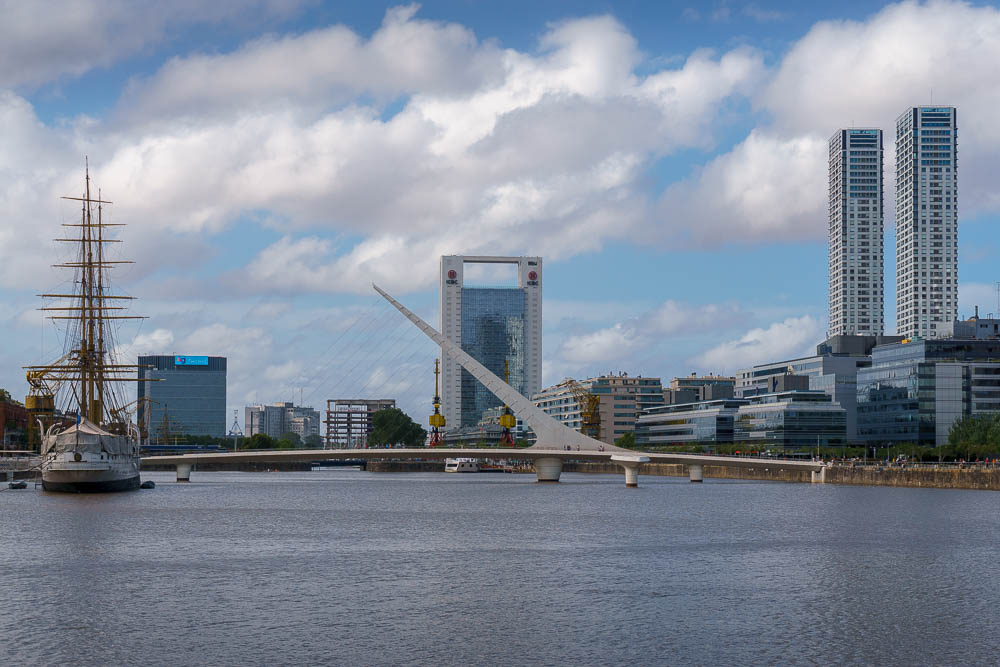 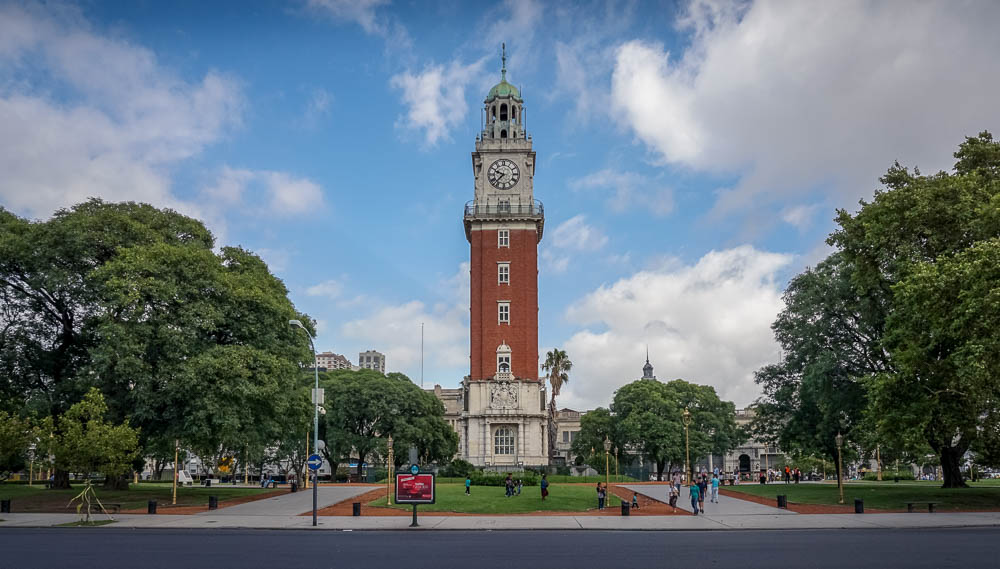 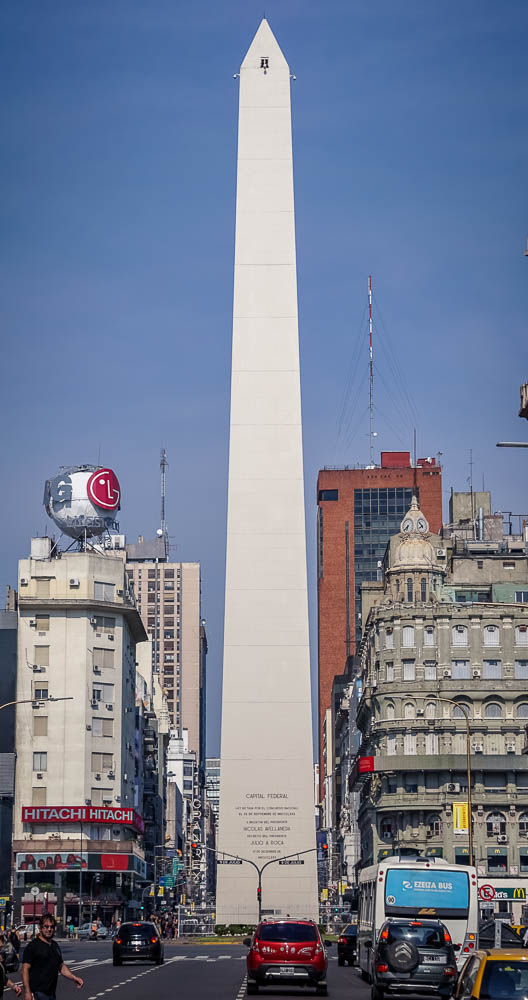 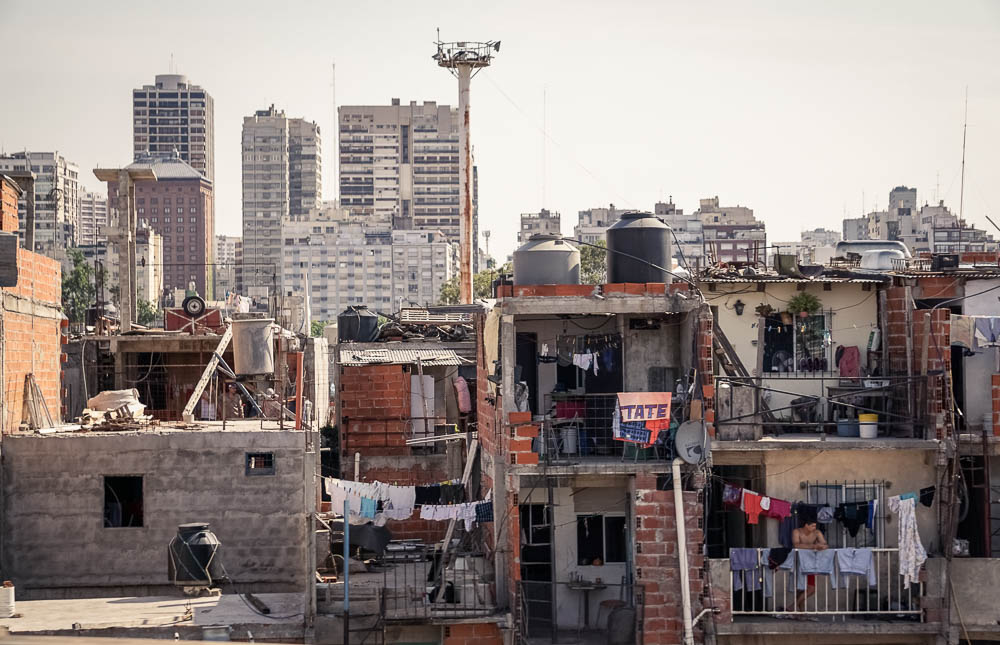 This time in Buenos Aires, our cultural “wanderings” went far more deeply into the history of the city and they were far more interesting than the last time there. The aforementioned peña took place in a historic building, important in the people's collective memory: the Escuela Superior de Mecánica de la Armada (Higher School of Mechanics of the Navy) which was originally an educational facility. However, during the military dictatorship it was used as an illegal detention center, where about 5,000 abducted people were held between 1976-1983; all except 150 were killed during or after interrogation and torture... Nowadays, part of the place has become a cultural center, that manages to keep the memories alive but at the same time, it transforms the nightmare into a lesson for the next generations.

And this was only the beginning! The two months we stayed in the area of Buenos Aires, we attended various events and as the day of the national elections was approaching, it was a great opportunity to be around Porteños, who passionately discuss about politics.

Buenos Aires also has a deep love for what is “classic”. The old restaurants, pizzerias, bars etc remain until today exactly as they used to be in the 20th century. This love for “classic” though, has managed to embrace the modern, with new bars in every neighborhood, selling cerveza artesanal – beer from microbreweries.

What else? I can write endless pages about that Thursday, when we walked with the Mothers of the Plaza de Mayo, the women who are a living part of the Argentine History. The mothers who never stopped looking for their disappeared children, those children who were tortured during the cruel military dictatorship. We saw them and most importantly we heard them talking about human rights, about persistence and the endless fight for justice. I can also fill pages with the colors of the rainbow, writing about the day when we danced with the LGBTIQ+ community at Buenos Aires' Marcha del Orgullo (Pride). As we learned later, the first march in Argentina took place in 1992 and it is usually held at the start of November to commemorate the founding of Nuestro Mundo, Argentina's first gay association, which was founded in 1967. The space is not enough to describe our feelings and our gratefulness for being there. Both experiences were unique, each one for what it is and for what it brings to the people who have the luck to attend them. 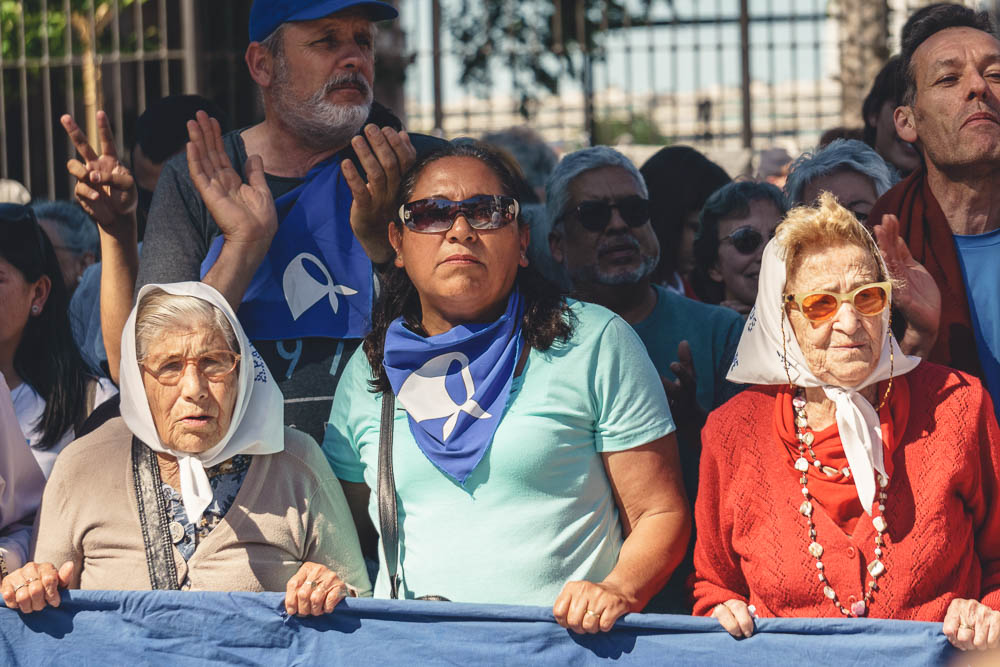 Mothers of the Plaza de Mayo 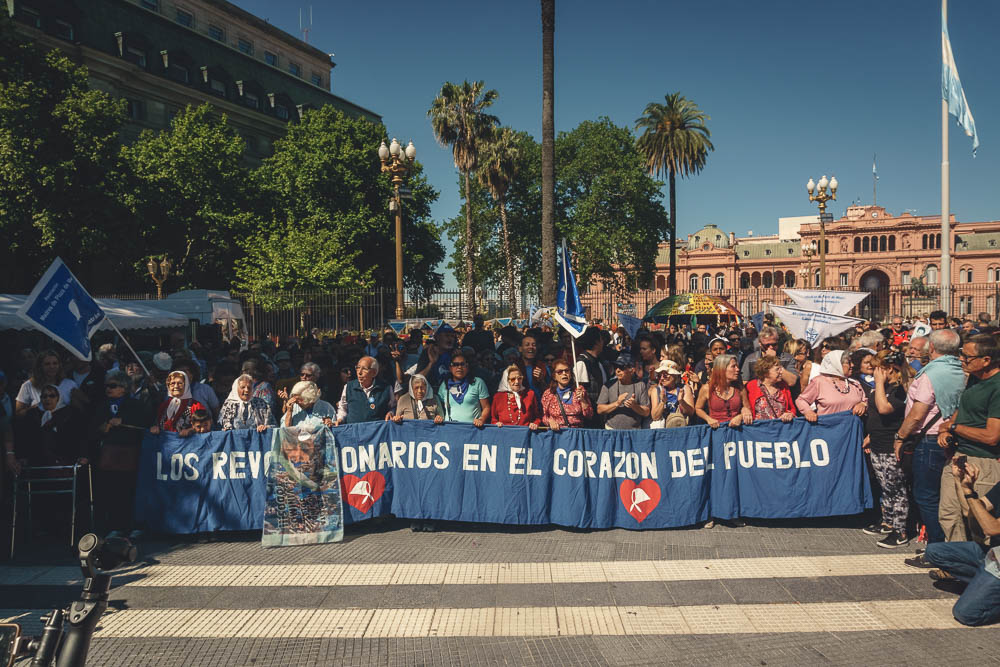 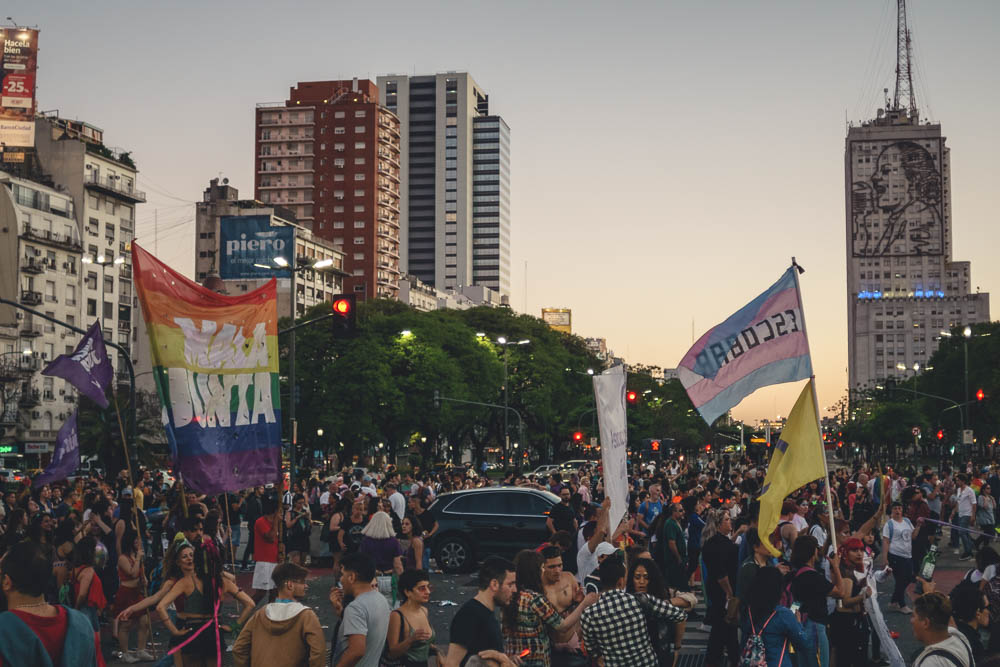 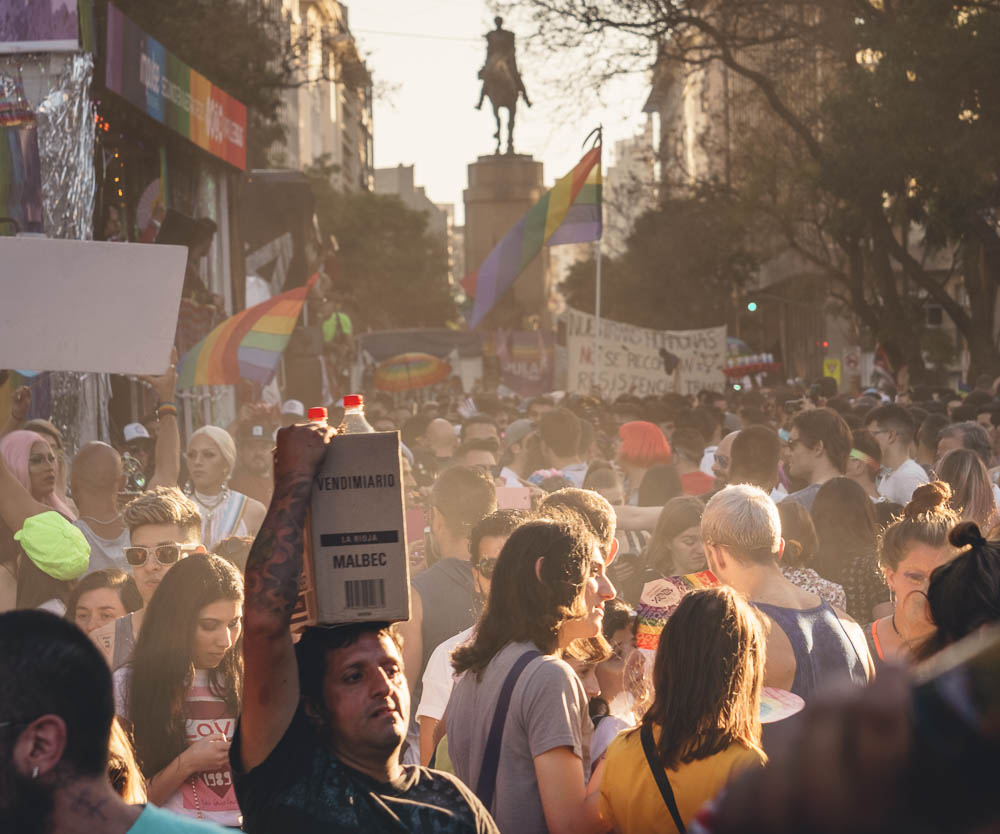 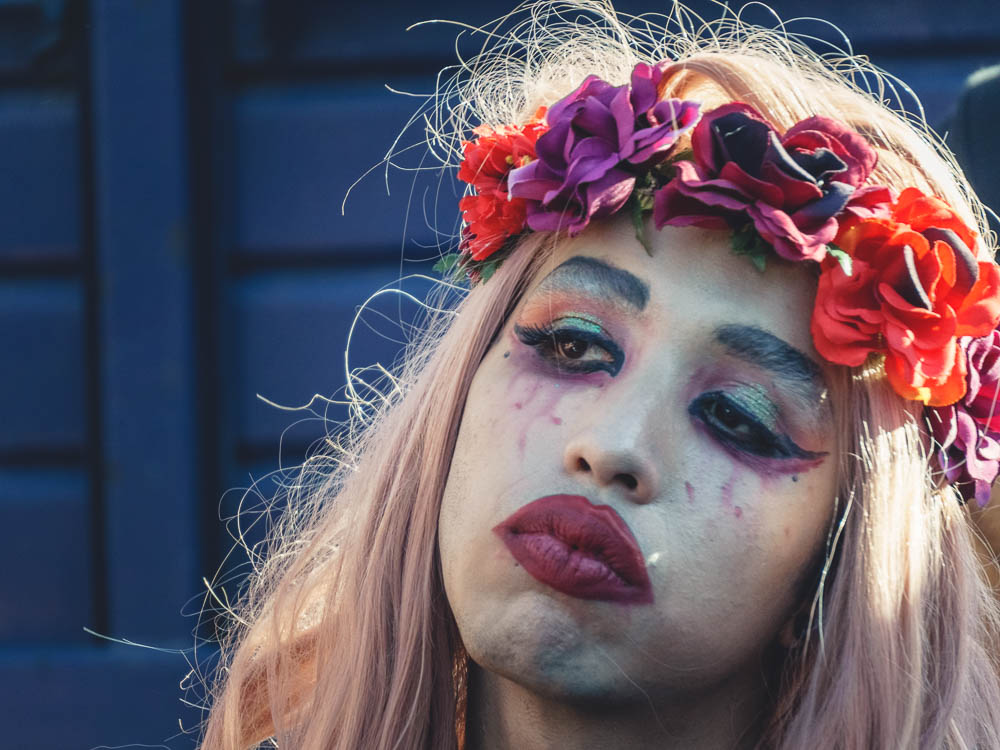 I've already written a lot, but I couldn't leave outside our visit(s) to the Feria de Mataderos. The famous open-air market takes place every Sunday opposite the old Mercado Nacional de Hacienda (National Livestock Market, where cattle arrived from the Pampas to be checked and sold for consumption), and attracts thousands of people who come not only for shopping, but also for the folkloric music and dances. And of course, for the tasty traditional dishes, such as the locro (a meat and corn stew), the tamales (corn and meat steamed in a corn husk) and the empanadas (baked or fried pasties). Until today, it remains far less touristic and far more original than the Feria de San Telmo.

I think I already mentioned that we spent two months in Buenos Aires. This happened for two main reasons. First, because we had to take Kitsos to the garage for some engine repairs (which proved to be a really bad idea, as you can see in this video) and second, because...who wants to leave from Buenos Aires?!

So, after one month at Gabriela's peaceful home in Colegiales, we went downtown and stayed at the famous neighborhood “Once” for 10 days. The apartment this time was in a big building on the noisy Pueyrredón av., just one block from the even noisier Corrientes av. that leads directly to the famous 9 de Julio av. and the even more famous Obelisk. Everyday we had to thrust our way through street vendors, pickpockets and literally thousands of people from all around the world going up and down the main avenues. Maybe it wasn't the most relaxing time we could have in Buenos Aires, but it was a new experience which we didn't regret at all. 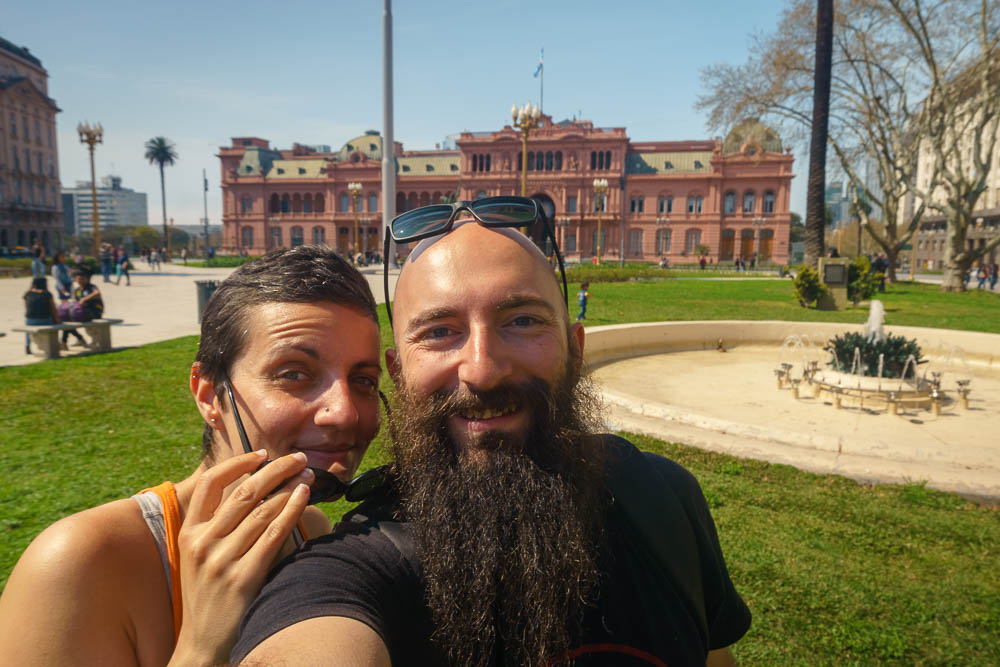 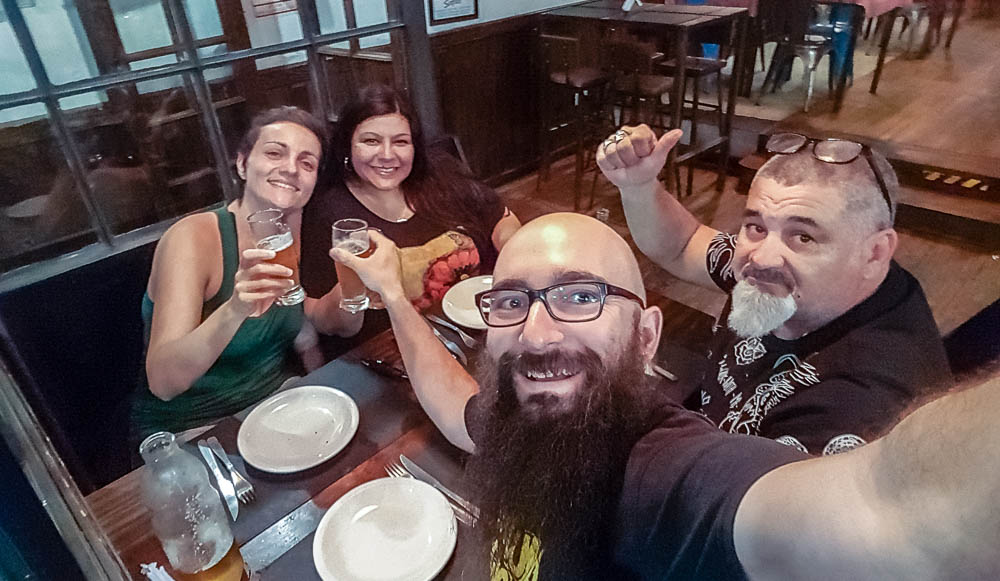 Dinner with our friends Silvina & Cefe

And while we were thinking which could be our next destination (always around our favorite city), an invitation came from our friends Silvina and Cefe, whom we had first met in 2015. They live in Quilmes, a city in Greater Buenos Aires (Gran Buenos Aires), about 20 kilometers away from the Autonomous City of Buenos Aires (CABA). Quilmes is a place that has everything, including its own beer (Cerveza Quilmes). It has its own center, cultural activity, social and political life, but at the same time it still has neighborhoods with unpaved roads, gardens and a semiurban lifestyle. Silvina, Cefe and Sofia (Silvina's mother) showed us once more the true, warm and unforgettable hospitality of the Argentinians.

Around mid-November, we realized that it was time for us to go. Summer was just around the corner and we didn't want to be “trapped” in Patagonia during the high season, when everything is packed with tourists and the prices are high.