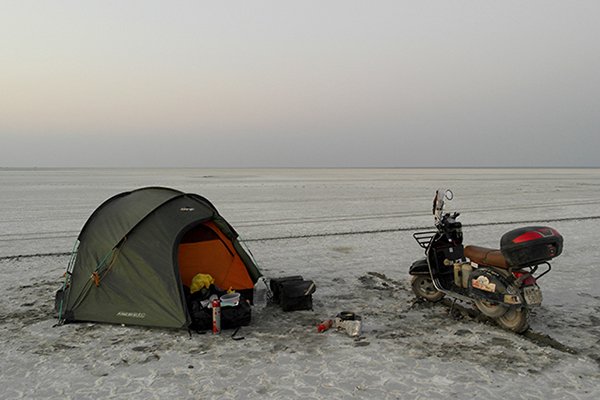 The differences between 2 travelers can be huge! Before I left from Livingstone, I talked with a tourist from the USA (a girl about 24 years old) who warned me that I would find difficulties in crossing the borders between Zambia and Botswana (annoying guys who would try to sell me things etc). For one moment, I started considering it as a problem but when she told me that it would take me about 1 hour to cross the borders, I realized that the word “difficult” is not the same for everyone…6 hours is a difficulty, 1 hour is not!

Crossing the borders of Zambia to enter Botswana was the easiest thing to do (the boat took me some time, but everything else was quick and easy). No one caused me any problems and even the guys who were selling currency wouldn’t come towards me unless I had called them. I don’t know, maybe it’s the beard that has grown too long and people are afraid of me! Or maybe I’ve become so used to the way of life in Africa that I don’t take any notice of these things. 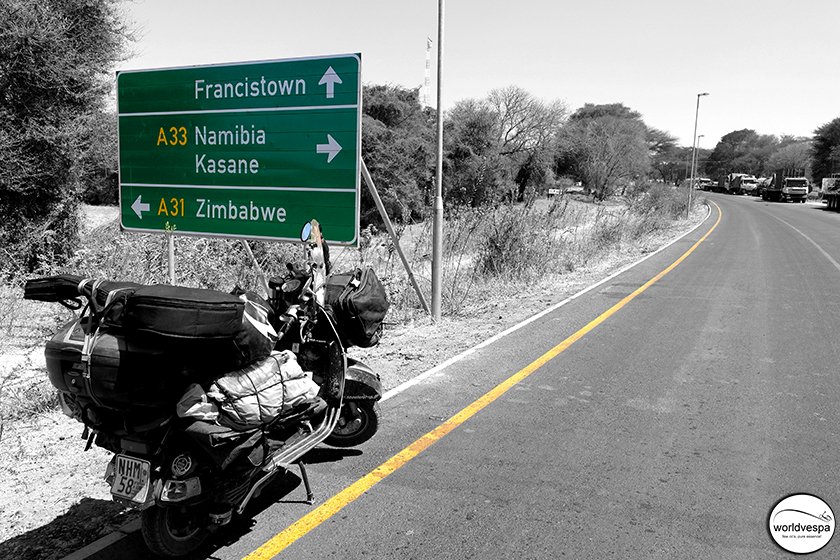 My goal was to get to Nata. I wouldn’t visit the National Park of Chobe because the cost for the entrance to the park is very high, as everyone told me. My plan was only to visit Etosha National Park in Namibia. I was informed that about 50kms before Nata, there was a nice campsite where I could stay and very close to that campsite, there was a waterhole where elephants came to drink water. It is nice to be able to take as many pictures as you want from a close distance! Only 1-2 kms after Pandamatenga and as I was ready for the last 160kms, I chose to go a bit faster so that I would be at my destination before the night fell. The last few hours, I had been hearing a metallic sound coming from the engine and the moment I accelerated, the sound became louder and the engine suddenly stopped. After some minutes, I started the engine again and it worked without a problem. However, I was scared to continue with the risk of having to stop again in some remote place and as I didn’t want any lion to rip my tent, I decided to go back for 1-2 kms and spend the night at a campsite nearby.

From the time I was in Livingstone the poor vespa was trying to tell me that something wasn’t right. I saw a petrol stamp once or twice under the engine and did nothing at all. The next morning I opened the carburetor and screwed every screw. I was hoping that I had found what was wrong: the screw that connects the fuel pipe with the carburetor was loose and the fuel was dripping out. My mechanic, Costas Kyrou was right once again and his prediction through facebook, about what was wrong was very accurate! At exactly 12.00′ I was ready to go and meet the elephants and with a speed of no more than 60km/h without any stops (there were too many warning signs that I couldn’t ignore), I managed to get there…(I should mention that I stack and fell 2-3 times in the sand, but it’s ok…I had plenty of clutch disks!) 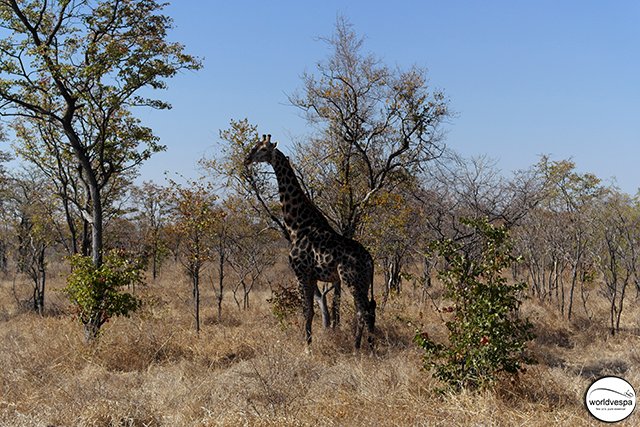 The previous day I saw a leopard and some elephants and the night I slept in that campsite (we call them “lodges” here), I could hear the lions roaring! From the moment you enter Botswana you realize how many wild animals you are about to see, because there are warning signs everywhere “You are stopping here by your own risk, this is a wildlife area” etc. 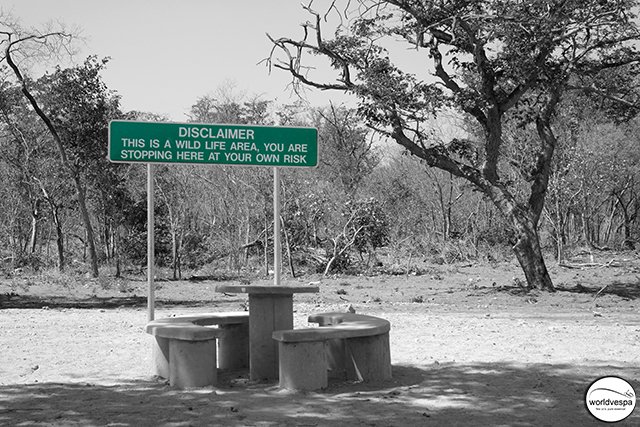 I was very lucky because at the “Elephant Sands”, the campsite close to the waterhole where the elephants gather, I met a guy from Makgadikgadi who had spent all his life in the area around Makgadikgadi Pans and the last minute before I leave to go there, he gave me some priceless advice which saved me from having to change clutch disks once more. That region I intended to visit used to be a huge lake at the size of Switzerland that dried up some thousand years ago. 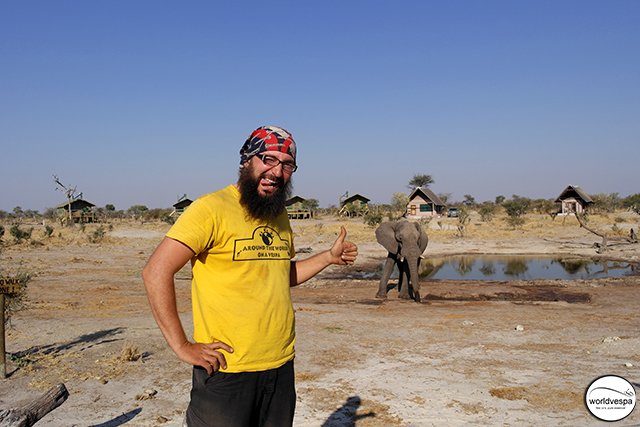 The years passed and the taxes were raised and the unemployment rates also raised and the lake dried from sadness, but at least now it is the second largest salt pan in the world, after the Salar de Uyuni in Bolivia. Same as the majority of tourists, I also decided to head to Kubu Island (“island” from the time it was surrounded by water), but without knowing anything about the condition of the road. What worse could happen than a broken clutch? I had already burnt some disks before, it’s difficult the first time but you get used to it eventually! However, I followed the wise advice given to me and chose another route to take. The road was not paved but it was in good condition and the most significant part: I was the only living organism for many kilometers! 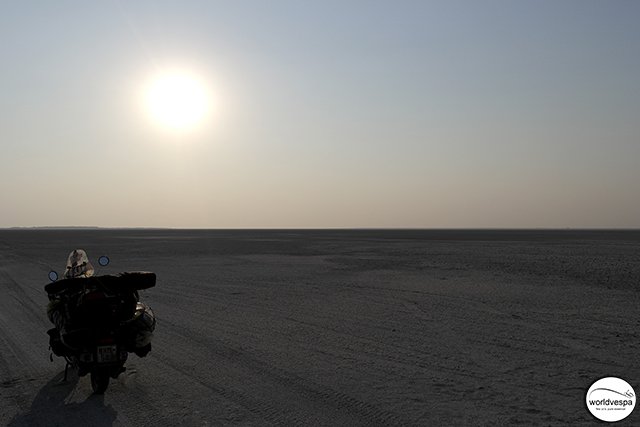 This last part about being all alone, at first was good but when I got lost, I regretted for not having marked my route with pebbles or at least, having saved it in my GPS! Thankfully, the Vespa-God helped me find it again. I tried to drive on the salty surface but as my tires were not wide enough and the vespa was loaded with some hundred kilos, it sank. So I stayed on the road and pitched my tent exactly next to it. I boiled some potatoes, and ate them with the bread and tomatoes I also had in my bag. It was one of the best dinners I had in my life. Then I slept there, in the middle of nowhere, under the sky which was full of stars and hearing nothing but the wind. 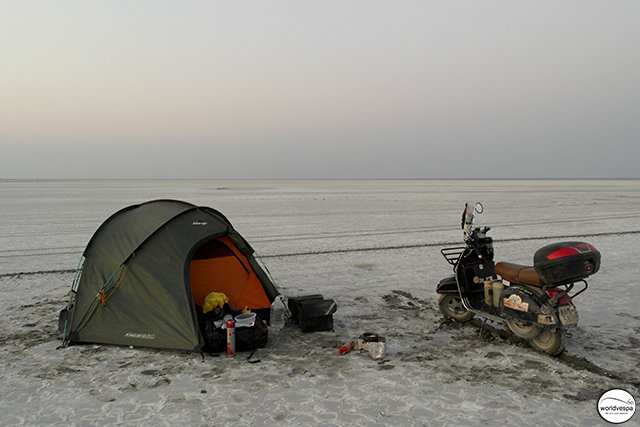 The next morning I headed to Maoun, a town which is considered to be the best place to start a walk to the delta of river Okavango. Of course, the place is full of tourists (the whole country is full of tourists) of any “type”: from backpackers or senior travelers in groups, to overlanders on fully equipped 4X4s that make the equipment for Paris-Dakar Rally look like toys for amateurs! I chose to sleep in my tent at a backpackers inn, the “Old Bridge Backpackers”. The price was really low and I had my own kitchen and laundry, as well as a variety of organized activities from which I could pick the ones I preferred. Additionally to all these, I got the chance to meet many interesting people (you should check out the story of the French guy I met there, who is traveling for the last 20 years on his bicycle!). 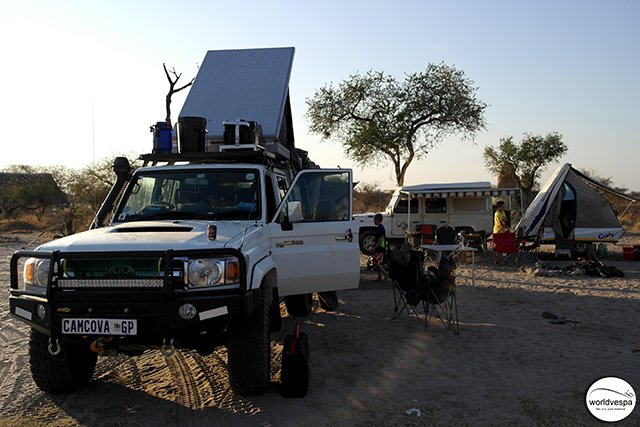 The only problem was the price of these organized activities, so I only chose a 45 minutes’ flight over the Okavango delta. The total cost was 275euros but I shared it with 4 more guys from the backpackers inn and cost 55euros per person, which was not that bad considering that there were 1 day walks on a pirogue at the cost of 80euros per person…I can’t imagine what kind of pirogues they were! 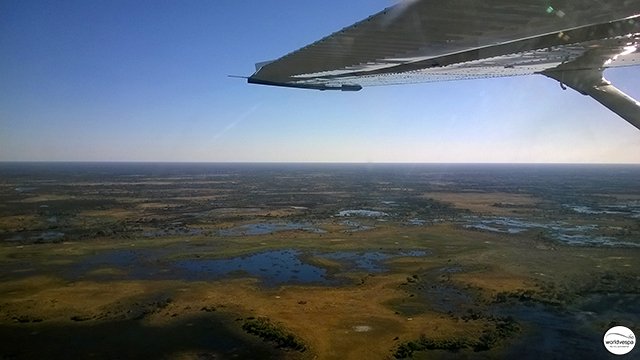 In Botswana I spent only 2 weeks. It’s not that I had nothing to do or see. On the contrary, the place is ideal for adventure, there are many national parks and you can see wild animals everywhere – even in the middle of the street. The landscape is very beautiful and as a tourist, you can find everything that you may need. There are plenty of supermarkets selling a variety of products of western origin and you can find drinks and food for every taste. 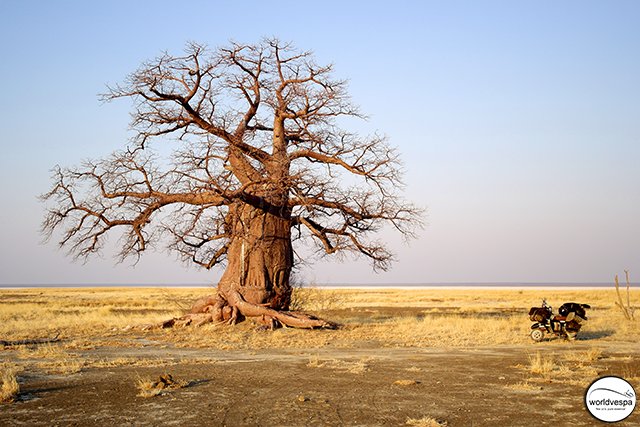 Despite all this abundance in everything, I found myself missing a lot of things in Botswana. As I already told you about Zambia also, when you have first visited countries like Nigeria, Cameroon, or the amazing two Congos, it is difficult to adjust to the huge difference. Everything seems so easy, so predictable and “normal” that you get disappointed. All the previous months I used to live in places where the ultimate chaos and craziness prevailed. But along with all these, it was the people who prevailed also. The real people! Believe it or not, there were so many similarities between all these countries and Greece that I felt like home. I always had to negotiate with someone (about just buying food or in order to get back my documents from a cop). I had to try hard in order to get to my destination and when I was there, I couldn’t find neither wi-fi, nor electricity to watch a movie on the laptop, or even just water! The other positive thing in all this lack of western products and services was that I managed to reduce the cost of my trip. If there is nothing to buy, you just don’t buy! If there is no campsite, you can just go to the next village, pitch your tent there and also make some new friends. If there is no McDonald’s, there is no problem: a nice lady who is cooking for her family is going to offer you some food. 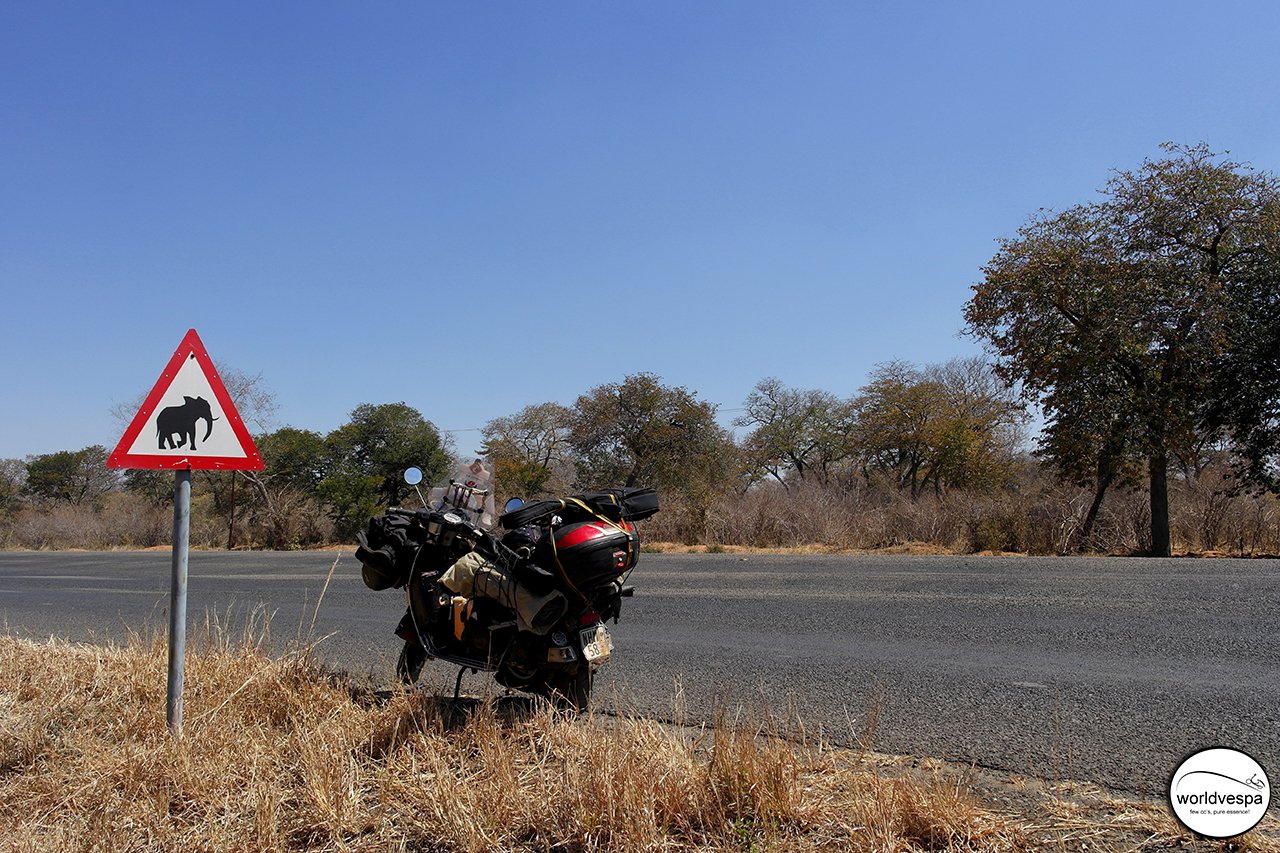 All the above, combined with the fact that I was now traveling all alone, made me speed up a little and increase the hours of riding per day! Next stop: Namibia! I was thinking not to go to Namibia and head directly to South Africa, but everyone told me that I should visit it. So, I decided to put some more oil in my engine, pay 50USD for a visa (apparently only Greek citizens have to pay for a visa to Namibia) and visit one more German ex-colony – now independent for only 24 years!