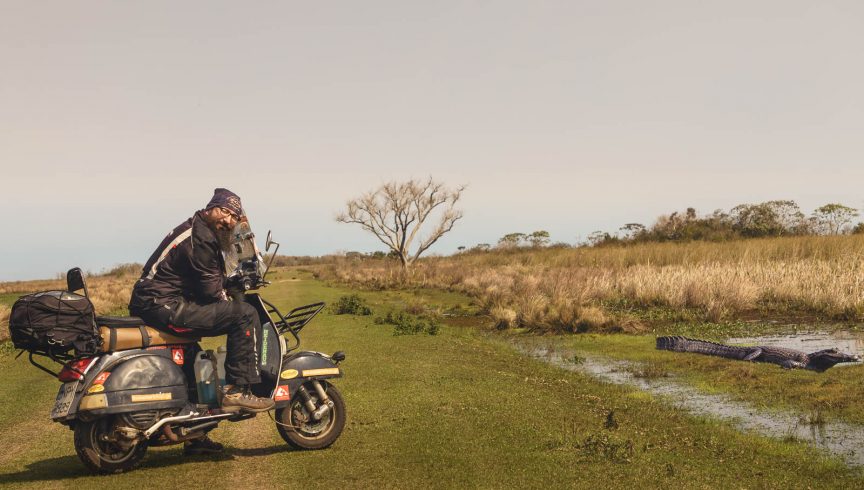 This time in Argentina, our plan was to travel following the Great Rivers from west to east, but when we heard about the amazing nature of Iberá National Park and its crazy wildlife, we knew we had to pay a visit!

On a sunny Sunday afternoon of August, we crossed the border from Asuncion (J. Falcón, PY) to Clorinda (ARG). Easy and quick procedure: immigration, stamped out, stamped in, customs and that's it, Argentina here we come! We wanted to go to Buenos Aires, but first we'd visit Uruguay. The original idea hadn't changed: travel at a slow pace and stop whenever we'd find something we liked.

We spent our first night at the campsite of Pilcomayo National Park (for free – Yay!), hoping to see at least one small yakaré (species of caiman) but unlike the birds of the area that didn't stop flying above our heads, the reptiles were playing hard to get. Slightly disappointed by the shy caimans, we continued on the NR11, following the river Paraguay towards Formosa. It didn't take long before we realized why we kept covering such large distances in Argentina in one day, just like the last time we were here. Argentina is huge! And in some parts of the country, in order to get from one town to the other, one has to cross endless parts of nothingness. 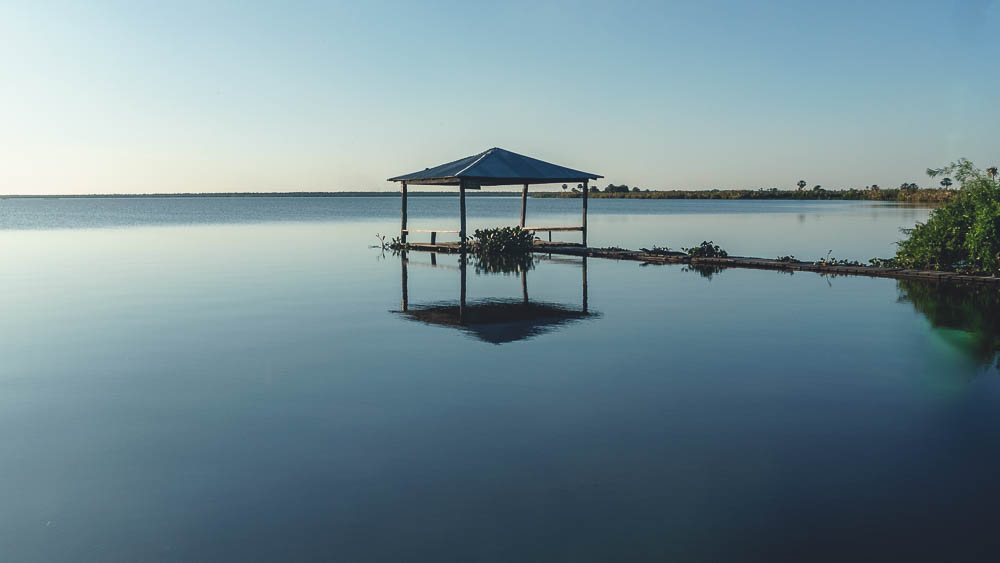 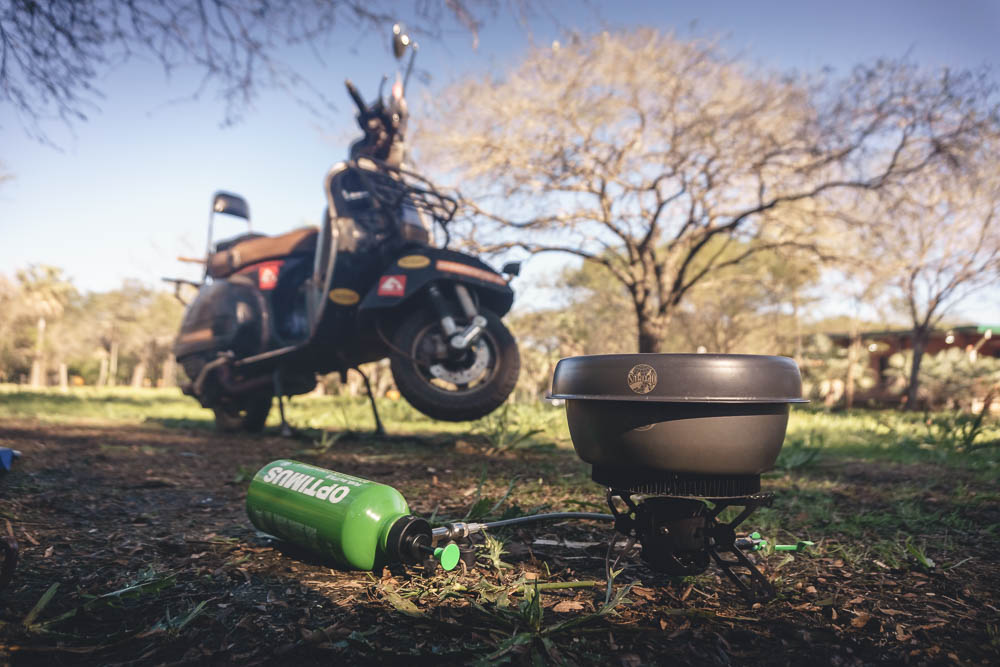 Our next destination was the Iberá National Park. We had decided to plan the route more carefully, so that we wouldn't miss potentially interesting places, this time in South America. Iberá National Park was among them, and since we had read that at some parts of its territory it's free to enter and camp, we'd be definitely paying a visit! Before we left the NR12 to take the road towards the park, we spent one day in Ituzaingó, a small town at the bank of river Paraná and we were happy to be allowed to pitch the tent inside the main hall of the municipal campsite. We love staying at the backyards of gas stations (something very common in Argentina) but the rain and the cold isn't the ideal weather for this option. 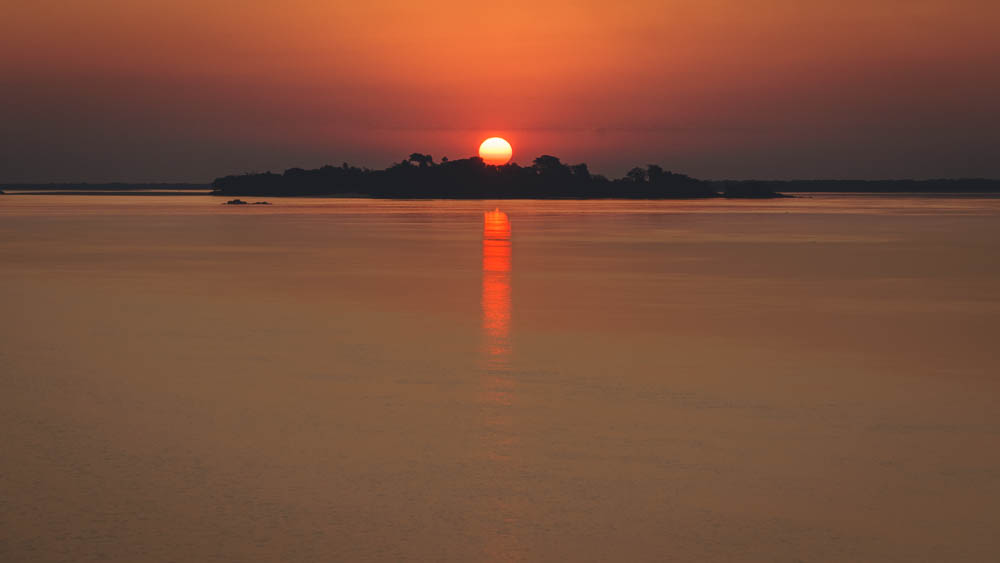 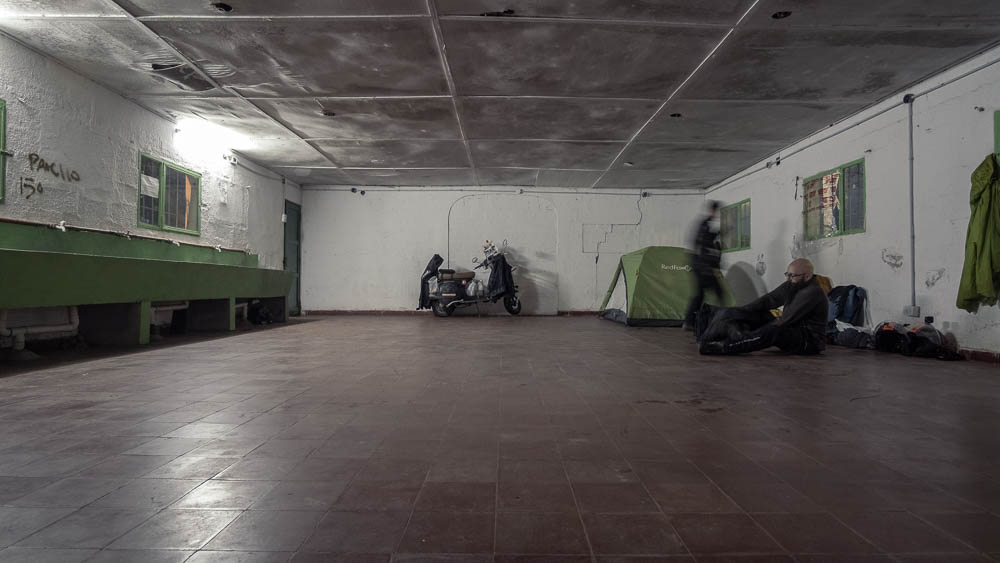 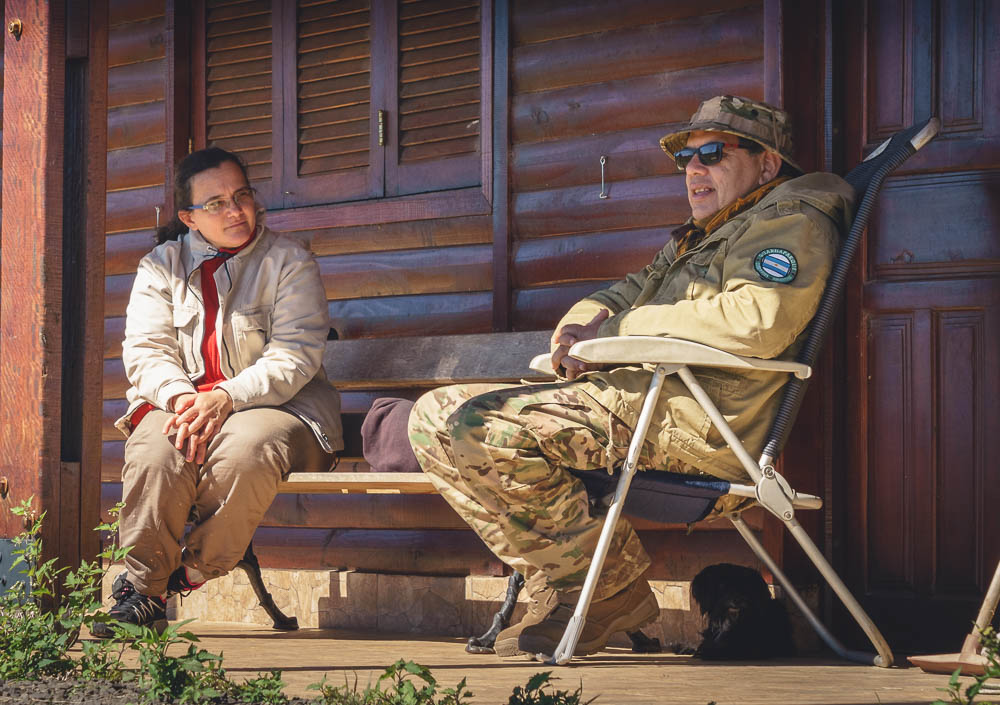 Stopping at the Park rangers' cabin before we head towards Iberá was one of the best ideas. Why? Because we met David (the park ranger) and Griselda (David's wife), who immediately invited us for some mate (the famous Argentinian beverage) and they even offered to load our stuff on their truck, so that Kitsos could move freely on the dirt road towards the Park.

The National Park was recently established (2018) and adds to the adjacent 1.3-million-acre Iberá Provincial Park that was founded in 1983. At a combined approximately 1.76-million acres, Iberá Park is now the largest nature park in Argentina and one of the most biologically diverse areas of the country. Centered on the great Iberá marshlands of Corrientes Province – one of the largest freshwater wetlands complexes in South America – Iberá Park’s diverse habitats of water, grasslands, and forest are home to some 4000 species of flora and fauna. The Park is also home of an ambitious program of “rewilding” – an effort to restore natural processes and reintroduce missing species in South America. There are several entrances to the Park, and depending on which one chooses, there are many things to do and, if you're lucky enough, to see. We entered from Cambyretá (more information HERE) which is in the north and rode for 30km on a easily doable dirt road, opening and closing gates so that the cattle of the private land around the Park's territory wouldn't leave.

The place is fantastic! The animals roam freely without the slightest sign of fear of people!

The place is fantastic! It's been maintained as natural as possible and it's so obvious that all the animals there live in peace. They roam freely without the slightest sign of fear of people. Being able to ride just next to the short-tempered capybaras, the laid-back (or that's what they want you to think) caimans and the elegant deer is surreal. There were only a few visitors who spent a couple of hours in the Park, so we actually had the whole place for ourselves. The night we slept there, in our tent was unforgettable and we would have spent more time in the Park, if it weren't for the rainy weather and the concern that we might get stuck in the mud. 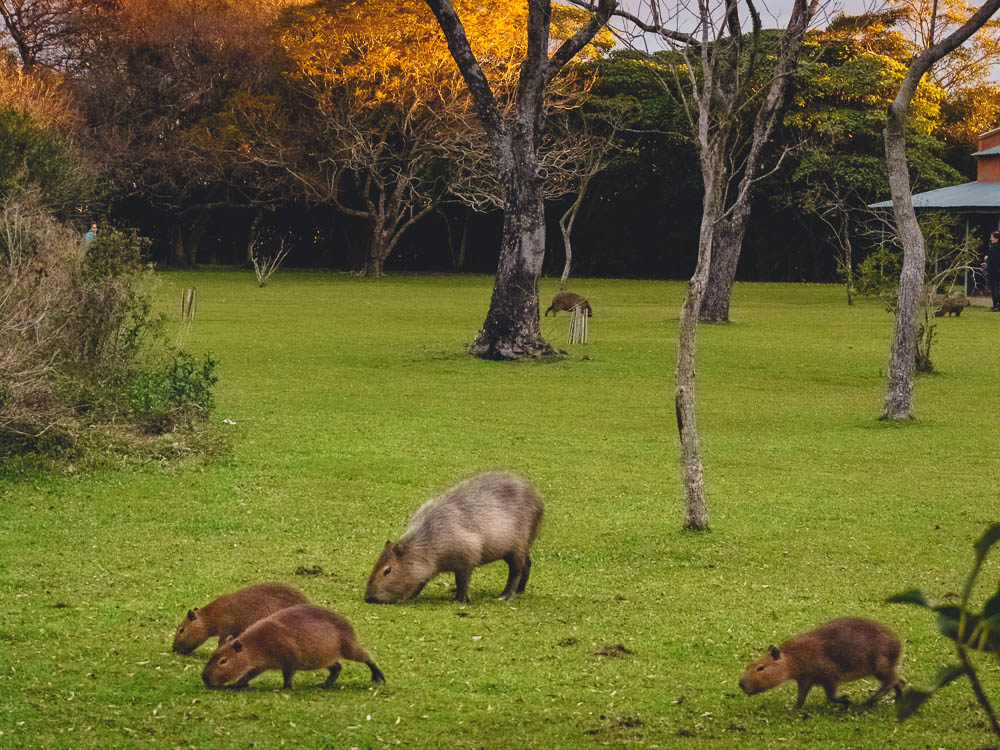 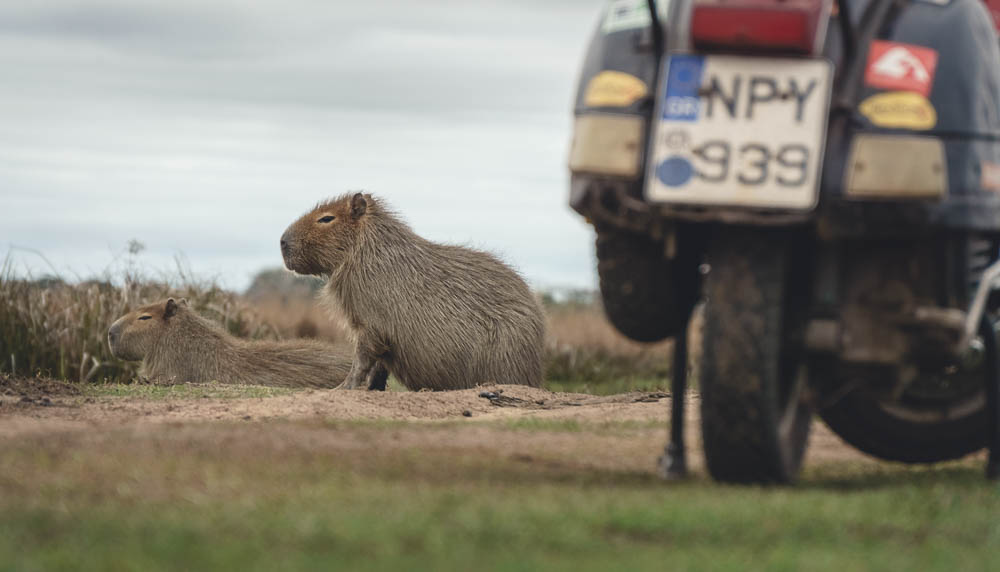 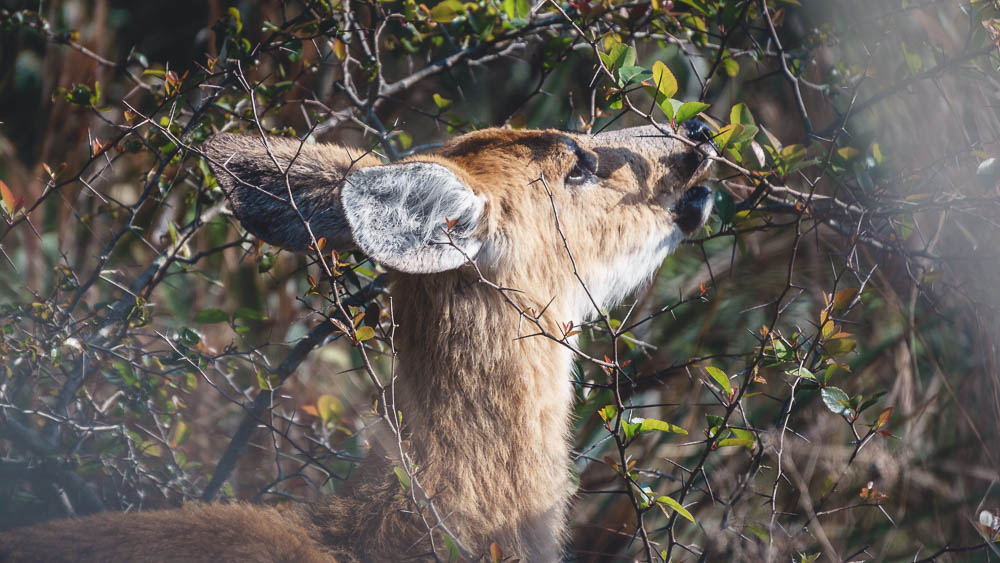 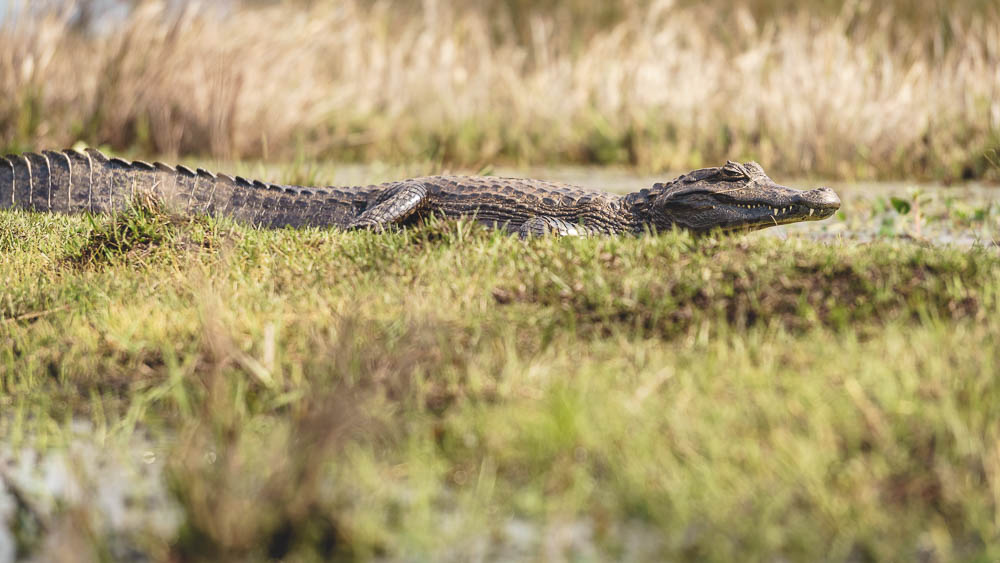 We left the next afternoon, but we didn't go far. When we stopped to say goodbye to David the park ranger and his wife, they invited us to spend some days with them. We couldn't deny! So, after two days with the lovely couple and their two adorable dogs, the skies cleared up and we were ready to hit the road again. It was mid-August and the weather in that part of the country was very cold. To be honest, we preferred this over the infernal summer heat that we had experienced 4 years ago, in 2015, when we first passed from the area.

From the moment we got on the NR14, we remembered how difficult it is to stay awake in the endless straight lines of rural Argentina – and please, remember that our average speed is about 65km/h. The road was familiar. We had done it in 2015, riding north to the Iguazu Falls. When we arrived in Santo Tomé, we went directly to the place we had camped in 2015, at the bank of the river Uruguay. Everything was pretty much the same, apart from the municipal bathroom which had slightly deteriorated (but, hey, one more night for free). We wanted to cross the border to Uruguay as soon as possible, so we kept on riding following the river, without spending more that one night in every place we'd stop. In the small town called Yapeyú, we met again with a couple of local riders, Charo and Rosendo, who had hosted us in 2015, when the river Uruguay had flooded the municipal campsite. We spent the afternoon drinking wine and eating the delicious savory cake Charo made for us. Oh, the Argentinians and their hospitality! 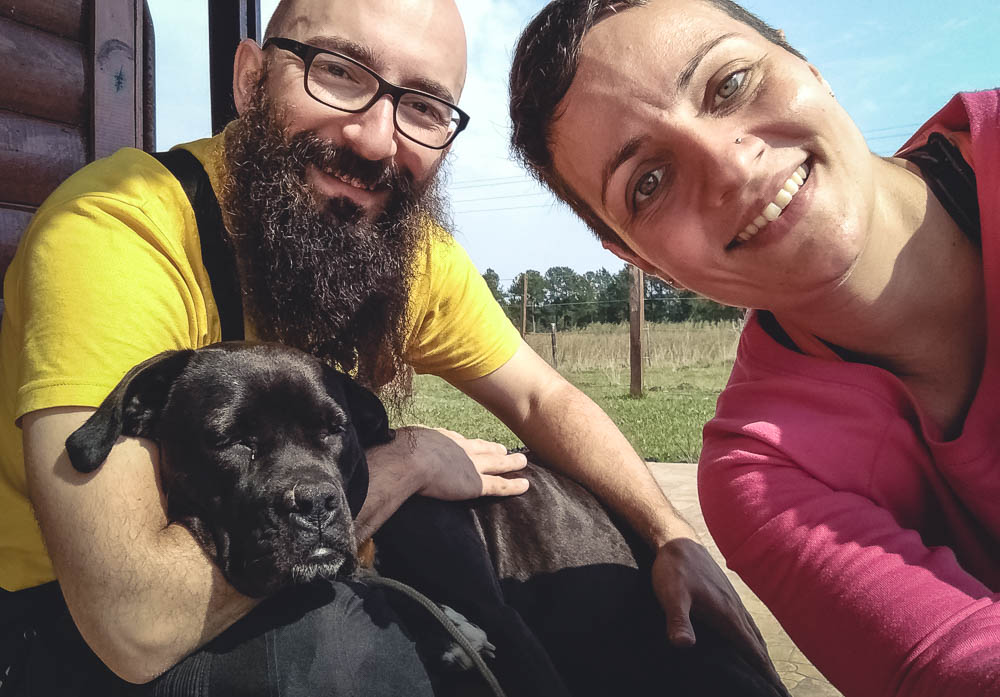 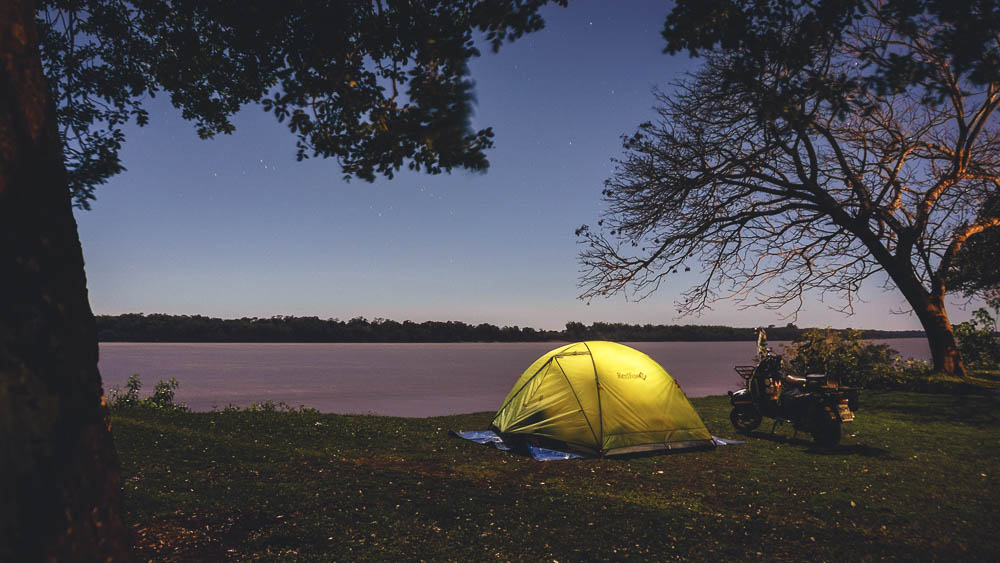 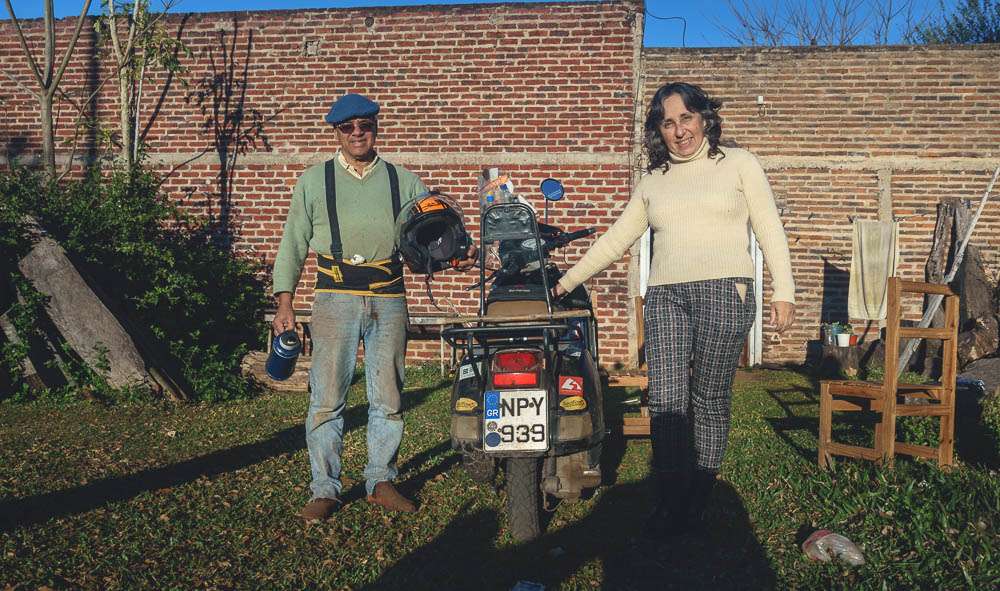 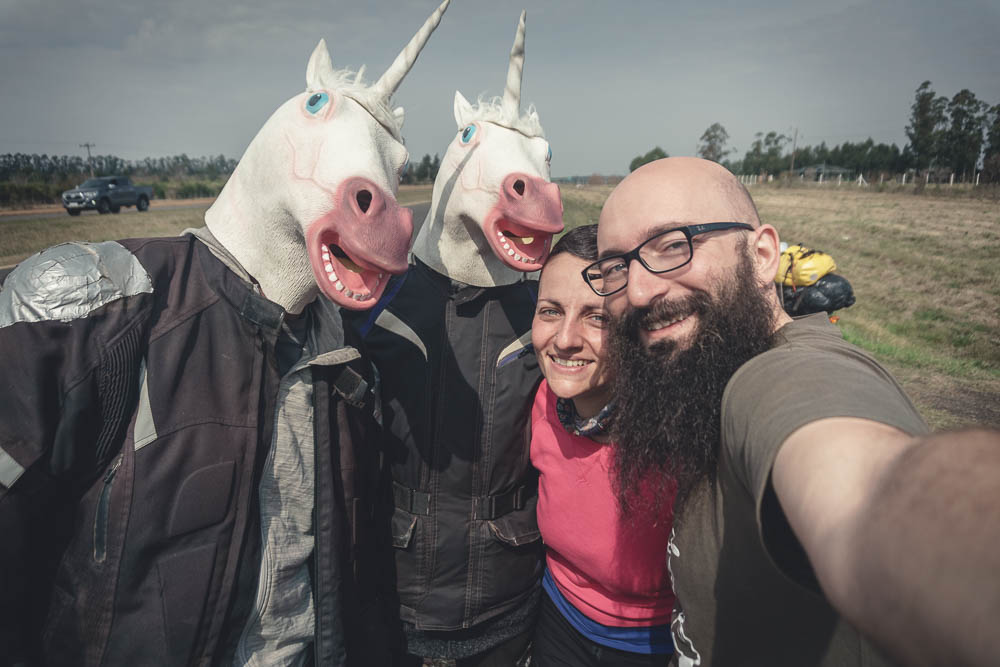 After Yapeyú, we had a two days' ride until the border in Concordia and, apart from a random meeting with two unicorns, the rest of the trip was easy and boringly predictable. Some wild camping by the river, some chitchat with the police at the checkpoint between the two Provinces (Corrientes – Entre Rios) and finally, we arrived. Next destination: Uruguay!