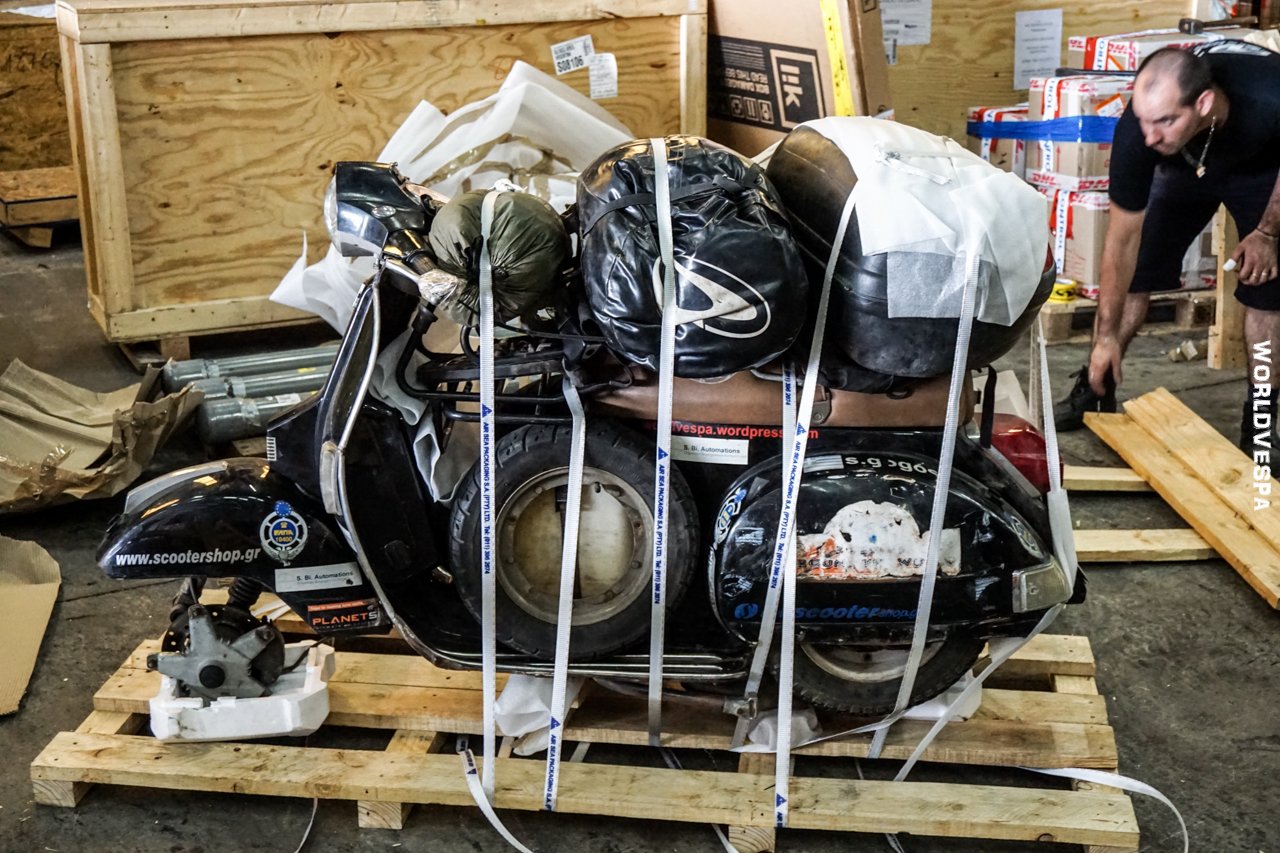 After so many months and so many kilometers in Africa, it was time for me to cross the Atlantic Ocean and get to America! But how? By boat? By airplane? Swimming? Selling my vespa in South Africa and buying a new one in America? Too many scenarios and too many options…So, after an intensive research that lasted 5 days(!), I chose the airplane. I couldn’t stay longer in South Africa waiting to find another biker who may wanted to ship his motorcycle overseas (so that we can share the expenses of a container). I also saw that the price to send my vespa by boat was almost the same with that of an airfreight. Moreover, shipping a motorcycle by boat is more complicated at the customs office and of course, a trip by boat takes more time (1-3 months!).

Arranging things directly with an air company is really difficult in South Africa. I tried to do it by myself but everyone insisted on sending me to a logistics company. This kind of companies ((bigger or smaller ones) usually carry out all the procedures needed to ship a bike: documents, arrangements, even to build the crate for the motorcycle and carry it to the airport. You can find a logistics company either by doing the traditional “Google search” or by finding it on the yellow pages. If you want to do what I did, take a look at this list and you’ll find what you need! I sent over a hundred e-mails to the companies on the list, giving them the dimensions and weight of the vespa in a crate asking for a quotation. Unfortunately, during the Christmas holidays most of the companies were closed and only about 5 of them replied to my e-mails. The amount of money they asked to send the vespa to America was almost the same at every company, so I chose the company who answered first and seemed reliable and experienced in sending motorcycles overseas.

My mistake was that I didn’t build the crate which was needed to put the vespa in, by myself. So, I had to pay 250EUR(!) extra. The total amount I had to pay was 1,950EUR instead of 1,450EUR, which was the first quotation. And that happened due to the fact that the guy who built the crate decided to make it slightly bigger than it needed to be so that the vespa wouldn’t get scratched(!). If I had built the crate by myself, I would have saved 250EUR (the cost for the crate) and 500EUR (the extra cost for making the crate bigger than needed). Unfortunately, I had limited time to do all this stuff because I didn’t have the right to extend my tourist visa due to the recent changes in the visa legislation in South Africa. Next time I’ll be prepared!

So, how to calculate the cost for sending a motorcycle overseas (airfreight):

Well, you can only calculate the volumetric (dimensional) weight and then you can ask for quotations from the companies. Calculating the volumetric weight is not difficult: Length x Width x Height (cm) / Dimensional Factor (6,000). If the result of the DIM weight is bigger than the vehicle’s actual weight, then the charge is made according to the DIM weight and not the actual weight.

As you can see in the pictures, the crate made by a “professional” was not the most complicated and difficult construction. All you need is…36 wooden boards (6 in every side) and some nails…and that’s it! I said: next time I’ll be prepared! The only thing I had to do was to disassemble the vespa. All the rest (documents, customs etc) were held by the company and everything was ready in 5 days only! In the attached photos, you can find all the information on the cost, the dimensions, the actual and volumetric weight of my vespa. It is the quotation and the receipt for the 167EUR I paid at the airport of Buenos Aires, as well as the receipt for the 87EUR I had to pay at the airline to have all the documents I needed in order to get my vespa from the customs office.

I didn’t use the help of any customs broker in Argentina to get my vespa back and even if I don’t know a single word in Spanish – as the 90% of the employees at the customs don’t speak a single word in English – I didn’t face any problem and I was back on my vespa in only 3 hours! The people at the customs were the best! I also want to repeat that I never came across the chaotic situations I thought I would have to overcome: no one asked for a bribe, everyone knew their job and they were really organized. The Greek authorities can learn a lot from the Argentinian ones… To sum up…the total cost was 2,200EUR unfortunately and it’s the last time I say it: next time I’ll be prepared!

We (Stergios & Alexandra) are traveling around the world 2-up on a Vespa scooter. For 2.5 years we were in Africa & South America and we're still rolling. Our book "Rice and Dirt: Across Africa on a Vespa" is now available.

5 Comments on “Shipping our Vespa to South America”

We use cookies to ensure that we give you the best experience on our website. If you continue to use this site we will assume that you are happy with it. More. Accept
Terms and privacy
Necessary Always Enabled